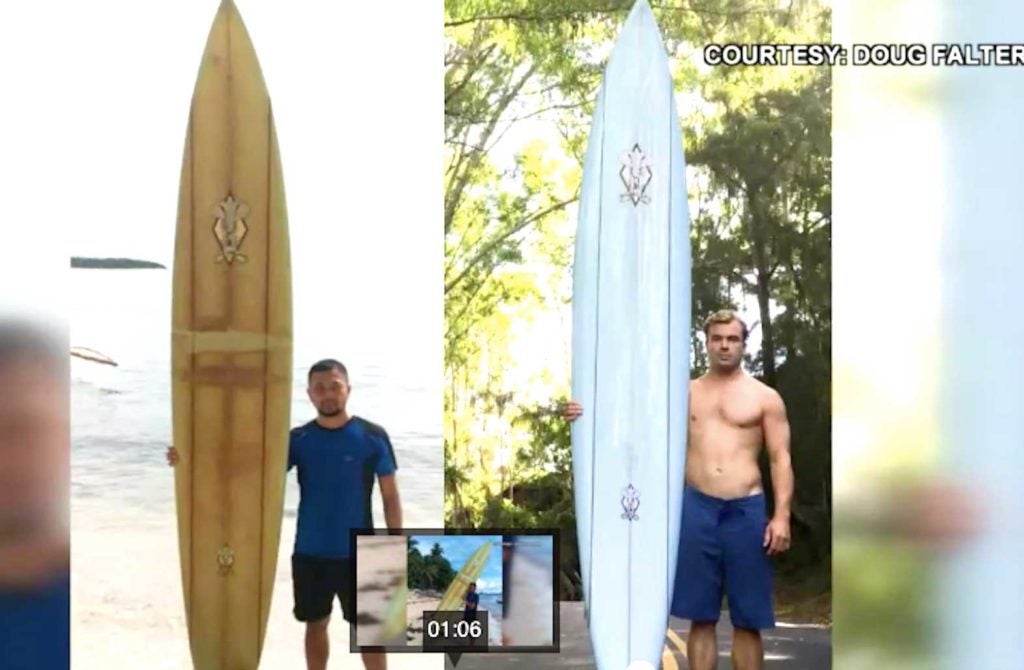 Doug Falter of Honolulu (right) and Giovanne (left) who found Falter’s missing surfboard thousands of miles away in the Philippines. SCREENGRAB KHON2

HONOLULU – Local surfer Doug Falter lost his prize surfboard when he wiped out and lost it two years ago. Incredibly, a teacher found it some 5,000  miles away — in the Philippines.

Falter had ridden a huge wave only to lose his custom Lyle Carlson, his favorite among his many surfboards. “I’m a man and I was almost in tears when I lost my board just because it meant so much to me,” falter told KHON2.

After two years, falter saw pictures of his board going around Facebook. “I could tell it was all yellow and it was aged and it was sitting in the sun for a long time. I was just kind of in shock.”

Falter messaged Giovanne in the Philippines, who told him the board was found one night, caught in a neighbor’s fishing net.

The two began messaging, and Giovanne said he realized how important the board was to Falter and offered to give it back to him. “Then he also invited me to come visit.”

The two hope to meet in person one day once the pandemic is over.

Falter is raising money to buy surfing gear and school supplies for his new lifelong friend.

“I raised the money on GoFundMe and we’re up to $1,200 so far and I’m just going to put as much money as I get into helping him,” he told KHON2.