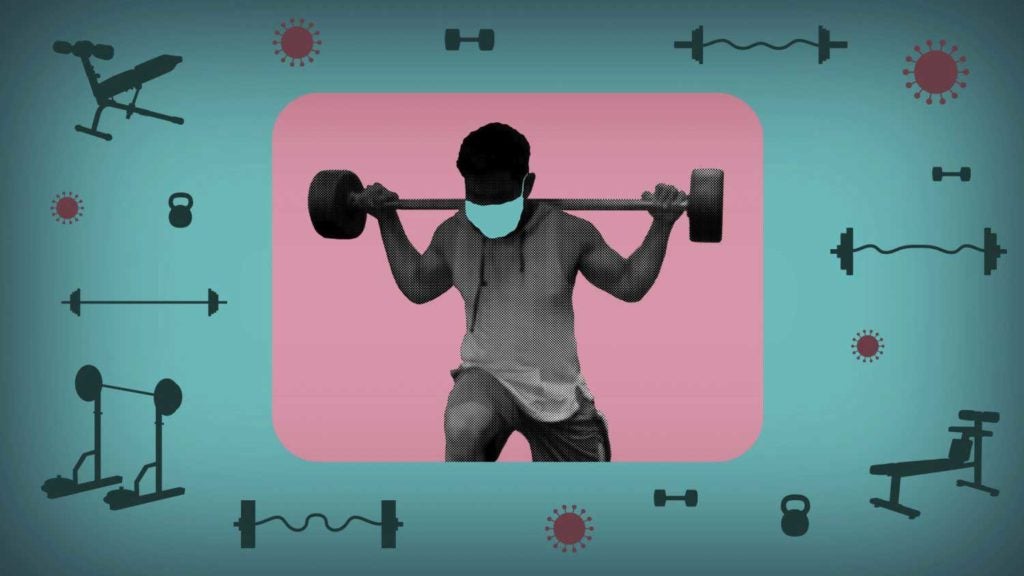 After shutting down in the spring, America’s empty gyms are beckoning a cautious public back for a workout. To reassure wary customers, owners have put in place — and now advertise — a variety of coronavirus control measures.

At the same time, the fitness industry is trying to rehabilitate itself by pushing back against what it sees as a misleading narrative that gyms have no place during a pandemic.

In the first months of the coronavirus outbreak, most public health leaders advised closing gyms, erring on the side of caution. As infections exploded across the country, states ordered gyms and fitness centers closed, along with restaurants, movie theaters and bars. State and local officials consistently branded gyms as high-risk venues for infection, akin to bars and nightclubs.

In early August, New York Gov. Andrew Cuomo called gym-going a “dangerous activity,” saying he would keep them shut — only to announce later in the month that most gyms could reopen in September at a third of the capacity and under tight regulations.

New York, New Jersey and North Carolina were among the last state holdouts — only recently allowing fitness facilities to reopen. Many states continue to limit capacity and have instituted new requirements.

The benefits of gyms are clear. Regular exercise staves off depression and improves sleep, and staying fit may be a way to avoid a serious case of COVID-19. But there are clear risks, too: Lots of people moving around indoors, sharing equipment and air, and breathing heavily could be a recipe for easy viral spread.

There are scattered reports of coronavirus cases traced back to specific gyms. But gym owners say those are outliers and argue the dominant portrayal overemphasizes potential dangers and ignores their brief but successful

A Seattle gym struggles to comply with new rules and survive

At NW Fitness in Seattle, everything from a set of squats to a run on the treadmill requires a mask. Every other cardio machine is off-limits. The owners have marked up the floor with blue tape to show where each person can work out.

Esmery Corniel, a member, has resumed his workout routine with the punching bag.

“I was honestly just losing my mind,” said Corniel, 27. He said he feels comfortable in the gym with its new safety protocols.
“Everybody wears their mask, everybody socially distances, so it’s no problem here at all,” Corniel said.

There’s no longer the usual morning “rush” of people working out before heading to their jobs.

Under Washington state’s coronavirus rules, only about 10 to 12 people at a time are permitted in this 4,000-square-foot gym.

“It’s drastically reduced our ability to serve our community,” said John Carrico. He and his wife, Jessica, purchased NW Fitness at the end of last year.

Meanwhile, the cost of running the businesses has gone up dramatically. The gym now needs to be staffed round-the-clock to keep up with the frequent cleaning requirements, and to ensure people are wearing masks and following the rules.

Keeping the gym open 24/7 — previously a big selling point for members — is no longer feasible. In the past three months, they’ve lost more than a third of their membership.

“If the trend continues, we won’t be able to stay open,” said Jessica Carrico, who also works as a nurse at a homeless shelter run by Harborview Medical Center.

Given her medical background, Jessica Carrico was initially inclined to trust the public health authorities who ordered all gyms to shut down, but gradually her feelings changed.

“Driving around the city, I’d still see lines outside of pot shops and Baskin-Robbins,” she said. “The arbitrary decision that had been made was very clear, and it became really frustrating.”

Even after gyms in the Seattle area were allowed to reopen, their frustrations continued — especially with the strict cap on operating capacity. The Carricos believe that falls hardest on smaller gyms that don’t have much square footage.

“People want this space to be safe, and will self-regulate,” said John Carrico. He believes he could responsibly operate with twice as many people inside as currently allowed. Public health officials have mischaracterized gyms, he added, and underestimated their potential to operate safely.
“There’s this fear-based propaganda that gyms are a cesspool of coronavirus, which is just super not true,” Carrico said.
Gyms seem less risky than bars. But there’s very little research either way

The fitness industry has begun to push back at the pandemic-driven perceptions and prohibitions. “We should not be lumped with bars and restaurants,” said Helen Durkin, an executive vice president for the International Health, Racquet & Sportsclub Association (IHRSA).

John Carrico called the comparison with bars particularly unfair. “It’s almost laughable. I mean, it’s almost the exact opposite. … People here are investing in their health. They’re coming in, they’re focusing on what they’re trying to do as far as their workout. They’re not socializing, they’re not sitting at a table and laughing and drinking.”

Since the pandemic began, many gyms have overhauled operations and now look very different: Locker rooms are often closed and group classes halted. Many gyms check everyone for symptoms upon arrival. They’ve spaced out equipment and begun intensive cleaning regimes.

Gyms have a big advantage over other retail and entertainment venues, Durkin said, because the membership model means those who may have been exposed in an outbreak can be easily contacted.

A company that sells member databases and software to gyms has been compiling data during the pandemic. (The data, drawn from 2,877 gyms, is by no means comprehensive because it relies on gym owners to self-report incidents in which a positive coronavirus case was detected at the gym, or was somehow connected to the gym.)

The resultant report said that the overall “visits to virus” ratio of 0.002% is “statistically irrelevant” because only 1,155 cases of coronavirus were reported among more than 49 million gym visits. Similarly, data collected from gyms in the United Kingdom found only 17 cases out of more than 8 million visits in the weeks after gyms reopened there.

Only a few U.S. states have publicly available information on outbreaks linked to the fitness sector, and those states report very few cases. In Louisiana, for example, the state has identified five clusters originating in “gym/fitness settings,” with a total of 31 cases. None of the people died.

By contrast, 15 clusters were traced to “religious services/events,” sickening 78, and killing five of them.
“The whole idea that it’s a risky place to be … around the world, we just aren’t seeing those numbers anywhere,” said IHRSA’s Durkin.
A study from South Korea published by the Centers for Disease Control and Prevention is often cited as evidence of the inherent hazards of group fitness activities.

The study traced 112 coronavirus infections to a Feb. 15 training workshop for fitness dance instructors. Those instructors went on to teach classes at 12 sports facilities in February and March, transmitting the virus to students in the dance classes, but also to co-workers and family members.

But defenders of the fitness industry point out that the outbreak began before South Korea instituted social distancing measures.
The study authors note that the classes were crowded and the pace of the dance workouts was fast, and conclude that “intense physical exercise in densely populated sports facilities could increase the risk for infection” and “should be minimized during outbreaks.”

They also found that no transmission occurred in classes with fewer than five people, or when an infected instructor taught “lower-intensity” classes such as yoga and Pilates.

It’s clear that there are many things gym owners — and gym members — can do to lower the risk of infection at a gym, but that doesn’t mean the risk is gone. Infectious disease doctors and public health experts caution that gyms should not downplay their potential for spreading disease, especially if the coronavirus is widespread in the surrounding community.

“There are very few [gyms] that can actually implement all the infection control measures,” said Saskia Popescu, an infectious disease epidemiologist in Phoenix. “That’s really the challenge with gyms: There is so much variety that it makes it hard to put them into a single box.”
Popescu and two colleagues developed a COVID-19 risk chart for various activities. Gyms were classified as “medium high,” on par with eating indoors at a restaurant or getting a haircut, but less risky than going to a bar or riding public transit.

Popescu acknowledges there’s not much recent evidence that gyms are major sources of infection, but that should not give people a false sense of assurance.

“The mistake would be to assume that there is no risk,” she said. “It’s just that a lot of the prevention strategies have been working, and when we start to loosen those, though, is where you’re more likely to see clusters occur.”

Any location that brings people together indoors increases the risk of contracting the coronavirus, and breathing heavily adds another element of risk. Interventions such as increasing the distance between cardio machines might help, but tiny infectious airborne particles can travel farther than 6 feet, Popescu said.

The mechanics of exercising also make it hard to ensure people comply with crucial preventive measures like wearing a mask.

“How effective are masks in that setting? Can they really be effectively worn?” asked Dr. Deverick Anderson, director of the Duke Center for Antimicrobial Stewardship and Infection Prevention. “The combination of sweat and exertion is one unique thing about the gym setting.”

“I do think that, in the big picture, gyms would be riskier than restaurants because of the type of activity and potential for interaction there,” Anderson said.

The primary way people could catch the virus at a gym would be coming close to someone who is releasing respiratory droplets and smaller airborne particles, called “aerosols,” when they breathe, talk or cough, said Dr. Dean Blumberg, chief of pediatric infectious diseases at UC Davis Health.

He’s less worried about people catching the virus from touching a barbell or riding a stationary bike that someone else used. That’s because scientists now think “surface” transmission isn’t driving infection as much as airborne droplets and particles.

“I’m not really worried about transmission that way,” Blumberg said. “There’s too much attention being paid to disinfecting surfaces and ‘deep cleaning,’ spraying things in the air. I think a lot of that’s just for show.”

Blumberg said he believes gyms can manage the risks better than many social settings like bars or informal gatherings.

“A gym where you can adequately social distance and you can limit the number of people there and force mask-wearing, that’s one of the safer activities,” he said.

In Bellevue, Washington, PRO Club is an enormous, upscale gym with spacious workout rooms — and an array of medical services such as physical therapy, hormone treatments, skin care and counseling. PRO Club has managed to keep the gym experience relatively normal for members since reopening, according to employee Linda Rackner. “There is plenty of space for everyone. We are seeing about 1,000 people a day and have capacity for almost 3,000,” Rackner said. “We’d love to have more people in the club.”

The gym uses the same air-cleaning units as hospital ICUs, deploys ultraviolet robots to sanitize the rooms and requires temperature checks to enter. “I feel like we have good compliance,” said Dean Rogers, one of the personal trainers. “For the most part, people who come to a gym are in it for their own health, fitness and wellness.”

But Rogers knows this isn’t the norm everywhere. In fact, his own mother back in Oklahoma believes she contracted the coronavirus at her gym.
“I was upset to find out that her gym had no guidelines they were following, no safety precautions,” he said. “There are always going to be some bad actors.”