Melchora Aquino (1812-1919), the “Mother of the Revolution,” was a refuge for the sick and the wounded, providing them food and medical attention. Emilio Aguinaldo gave Trinidad Tecson (1848-1928) of San Miguel, Bulacan, the title “Mother of Mercy” for fighting in the battlefield during the Filipino-American War, for nursing the wounded and encouraging them with motherly advice.

Aurora Quezon was  described as “the mother of the poor,” by Jesuit Father Pacifico Ortiz (1913-1983), the first Filipino president of the Ateneo de Manila University, for walking through life doing good, for being “the light among the blind, protecting the weak.” has referred to 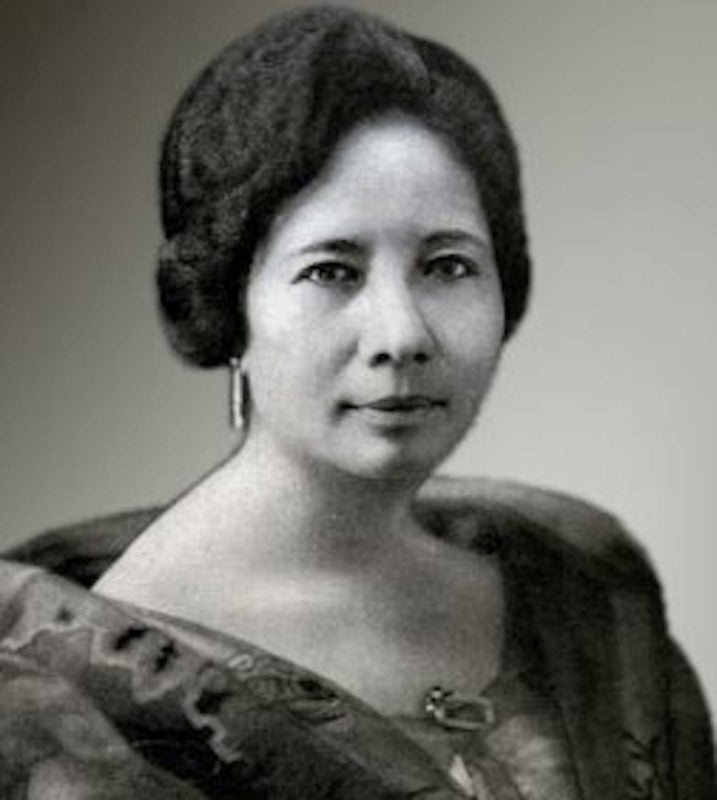 Imelda Marcos is different. In her self-delusion, Imelda dreams of being a Mother “not only for the Philippines, but also the world.” This and more self-proclaimed propaganda made Lauren Greenfield, the producer of the 2019 documentary The Kingmaker say, that Imelda is verifiably a narcissist, with an inflated sense of her own self-importance and place in  history.

Ferdinand Marcos was the first and only Filipino President to hold office for two decades (1965–1986), which could have been longer if the EDSA uprising didn’t happen. While in exile, Marcos passed away with his name deemed synonymous with the corruption and cronyism that made the Philippines the sick man of Asia. His widow Imelda ran for President during the 1998 national elections, while the widowed Aurora Quezon widow declined an offer to run as senator in 1945. The first was a political opportunist who loved immense power, whereas the second disdained political grandstanding.

Aurora Quezon also declined a lifetime monthly pension of 1,000 pesos extended by the Philippine Congress in 1946, saying she could not accept it knowing that countless war widows and orphans were suffering at that time. Most Rev. Michael J. O’ Doherty (1874-1949), Archbishop of Manila, once said that Aurora had always been a “national asset” in winning the respect of Filipinos and foreigners who came to know her.

Imelda was the only first lady who had the privilege to have met two Popes in Malacañan. St. Paul VI in 1970 was the first one. The second was St. John Paul II in 1981, who told her that affluence and the public display of wealth in the midst of massive poverty was unjust. Imelda played politics with the Archbishop Bruno Torpiagliani, the papal nuncio to the Philippines, with Cardinal Julio Rosales of Cebu, archbishops, and bishops, bringing them precious gifts in order to persuade them to accept Martial Law.

So different was Aurora Quezon who, although a friend to the high-ranking members of the episcopate, focused her attention on vocation promotion. She, in fact, completely paid the full tuition fees, which amounted to about P300 a year, of each of the 40 poor seminarians studying in the different diocesan seminaries.

Imelda has allowed self-deception to govern her conduct all her adult life, adorning herself with ruby and diamond-studded gold jewelry, and wearing a loud scarf to look like a queen. Stories of Imelda’s bacchanalian extravagance, which gave rise to the adjective “Imeldific,” could fill a whole set of encyclopedia: Her “diamonds hidden inside those diaper boxes,” five-million dollar shopping sprees in Rome, New York, and Copenhagen, or people discovering gallons of pricey perfume and bullet-proof bras in her closets.

Pretending not to have bilked the nation out of billions of dollars, the Iron Butterfly remarked, “They went into my closets looking for skeletons, but thank God, all they found were shoes, (3,000) beautiful shoes.”

Imelda kept a $32,000 diamond rosary that she gave daughter Irene as a wedding present. In contrast, Aurora Quezon, for her final, ill-fated trip to Baler, put into her bag an old rosary with missing beads, which she had inherited from her mother.

The fate of Imelda is longevity; she is somewhat weaker but still full of life at 91. The fate of Aurora was a glorious life spent for others, which abruptly ended when she was assassinated in 1949 at 61.

I conclude with a George Santayana’s quote: “Those who cannot remember the past are condemned to repeat it.” The Kingmaker warns that through the years the “people have underestimated her (Imelda), which made her all the more powerful and successful.”