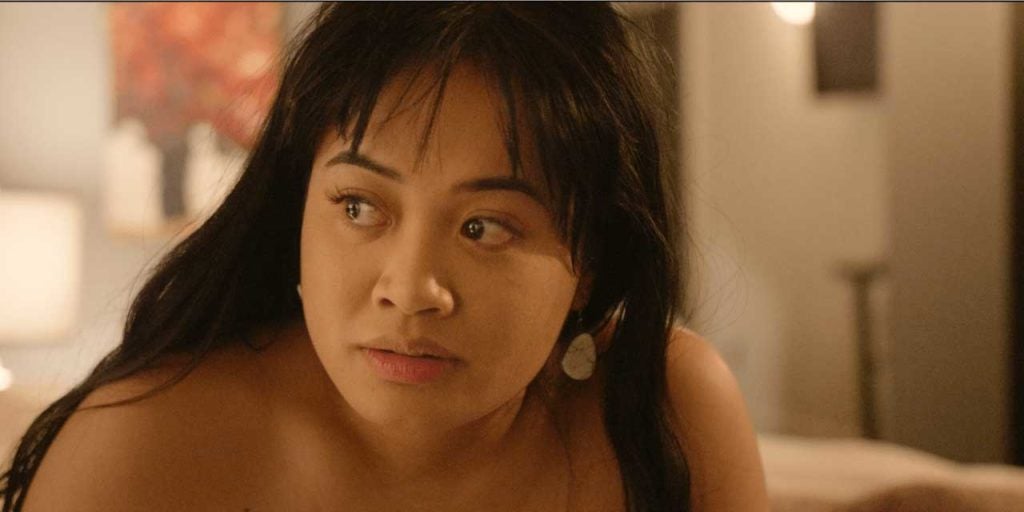 Hera Nalam as Iris in  “I Propose We Never See Each Other Again After Tonight.” ANDREW FORBES

WINNIPEG, Manitoba — In a groundbreaking venture, a Winnipeg filmmaker took a chance at casting relatively unknown Filipino actors in the first Canadian-made movie with a mostly Filipino cast and a Filipina leading lady.

“I Propose We Never See Each Other Again After Tonight”  has 20 Filipinos out of 29 cast with leading lady, Hera Nalam, in her first movie role.

The movie, which opened to sold-out screenings in Winnipeg on August 21, is billed as a romantic comedy, a “ quirky rom-com about “a Mennonite boy and a Filipina girl,” film director Sean Garrity says.

“I was shocked to be offered the lead role,” Nalam told PCN.com in a telephone interview from Winnipeg.

The 25-year old honors graduate of the University of Winnipeg’s Theatre Program was already in the middle of touring as a lead actor with the Manitoba Theatre for Young People’s (MTYP) production of “Torn Through Time” when she auditioned for “a bit part in the movie.”

“It was a hard decision to make as I did not want to leave the theatre,” but Director Sean Garrity made concessions for her to be able to do shootings while still acting in theatre.

“We have to shoot on evenings and weekends just so Hera could be available,” Garrity says.

Born and raised in the southern city of Cebu, Nalam was 16 years old when her family immigrated to Canada in 2011 and joined a relative in Winnipeg. 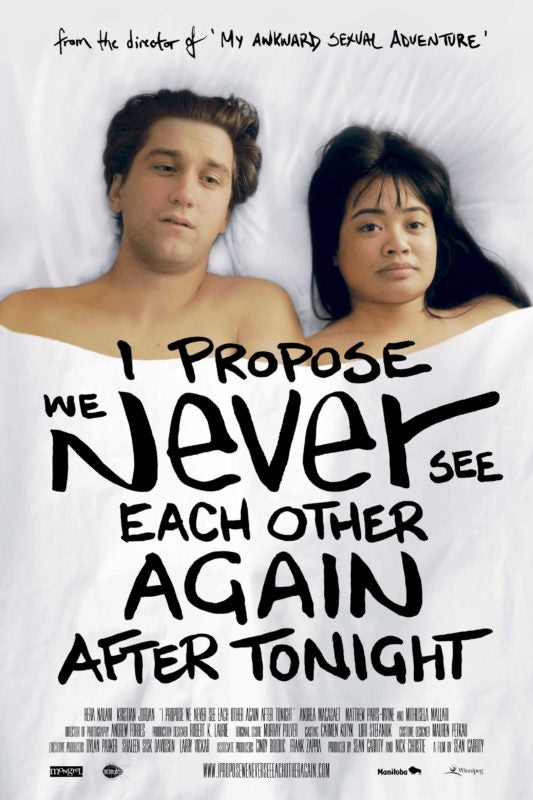 “I Propose We Never See Other Again After Tonight”opened to sold-out screenings in Winnipeg, Manitoba.

Alternating in English, Cebuano and Taglish the way it is in the movie, we talked about her journey into theatre and film.

Nalam’s mother is a professor at the University of Manitoba and  her dad is a maintenance mechanic at Gateway Industries. Much of her extended family lives in Winnipeg, inspired by one of her grandmothers, who was the first to emigrate here.

“I would consider my mom my first influence in theatre,” Nalam says. “She has a Ph.D in literature, she did a lot of writing and directing. She did all the artsy stuff and growing up and… I just kind of watched her.

That inspired her to take up theatre after finishing high school at Daniel McIntyre.

Her mother was more supportive of her decision to take up theatre while her dad was initially unresponsive but eventually accepted her choice.

Nalam is also a singer-songwriter whose credits on stage include  QUEST with Meraki Productions, UofW’s Rosencrantz & Guildenstern Are Dead, Concord Floral and Time & The Conways and Shakespeare in The Ruins’ production of Timon of Athens. She has successfully written and recorded her original music, which are all available on soundcloud.com/hera-bear.

Nalam praises Garrity for producing the movie saying that he  “has endeavored to show the Filipino Canadian community as never before in Canadian film — or in a Filipino film for that matter.”

“I like how Sean was very respectful of showing how warm but also how tough it can be in a Filipino household or the Filipino community where everybody seems to know each other,” she told the Winnipeg Press in an interview.

“One out of every 10 Winnipeggers is Filipino, so if you’ve got a movie that’s a Winnipeg movie with more than nine characters in it, it’s more of a statement to not have a Filipino in your movie,” he says. “I’ve made seven movies and I’m guilty of it. I’ve only cast two Filipinos in all the movies that I’ve cast (prior to ‘I Propose’).”

“Part of it is that there’s not a lot of Filipino people in the city pursuing a career in acting,” he says, acknowledging actress Stephanie Sy — who was almost in his film — and current Broadway performer Andrea Macasaet, who plays the heroine’s sister in “I Propose.”

Nalam says one of the big reasons she loves Winnipeg is “the acceptance of art and the encouragement of doing what you love to do here.” she says. “I don’t know if I see that a lot in the Filipino community.”

Winnipeg was of course where Ma-Anne Dionisio of ‘Miss Saigon’ fame started her career. As a young teenager newly arrived from the Philippines, she sang at the church choir of St. Edward’s Church on Arlington St.

Nalam says Filipinos love art, music and movies, but being an artist is another matter.

“But I find it here in Winnipeg, it’s different,” she says. “You are who you are and we accept you for who you are. And I love that.”

Her observation about the city is quite true. I’ve spent a quarter of my life in the city where my own writing instincts were nurtured and flourished.

Winnipeg was where I started Silangan , the first Filipino newspaper in western Canada in 1976 until 1982 when I sold it the Cantiveros’. The paper is still publishing under another name – Filipino Journal, one of the oldest Filipino papers in Canada.

Winnipeg Filipinos have been interacting with Mennonites who had a number of well-established settlements in the province. A Filipina teacher taught at a one-room schoolhouse at the Hutterite Colony in Elie, 30 km. northwest of Winnipeg for over two decades. That’s where we got our fresh supply of pigs for the traditional Filipino lechon.

The native-born Garrity, who returned to his hometown after a short stint in Toronto where his Japanese wife was finishing her studies, has high hopes for the success of  “I Propose We Never See Each Other Again After Tonight.”

“I think the argument is: Make it work in Winnipeg and it’s going to travel,” he says, ultimately pinning the fate of the film on Hera Nalam, its leading lady.

“I’m quite confident that if I can get the movie out, she’s going to have an incredible career ahead of her,” he says of Nalam. “She’s just a stupendous actor. She’s got so much charisma,” he told the Free Press.

After spending years backpacking through Asia and South America, Sean returned to Winnipeg to begin a career as a filmmaker and musician in 1997, quickly creating award-winning music videos for Winnipeg artists including The Wyrd Sisters, Mark Reeves and Richard Moody. 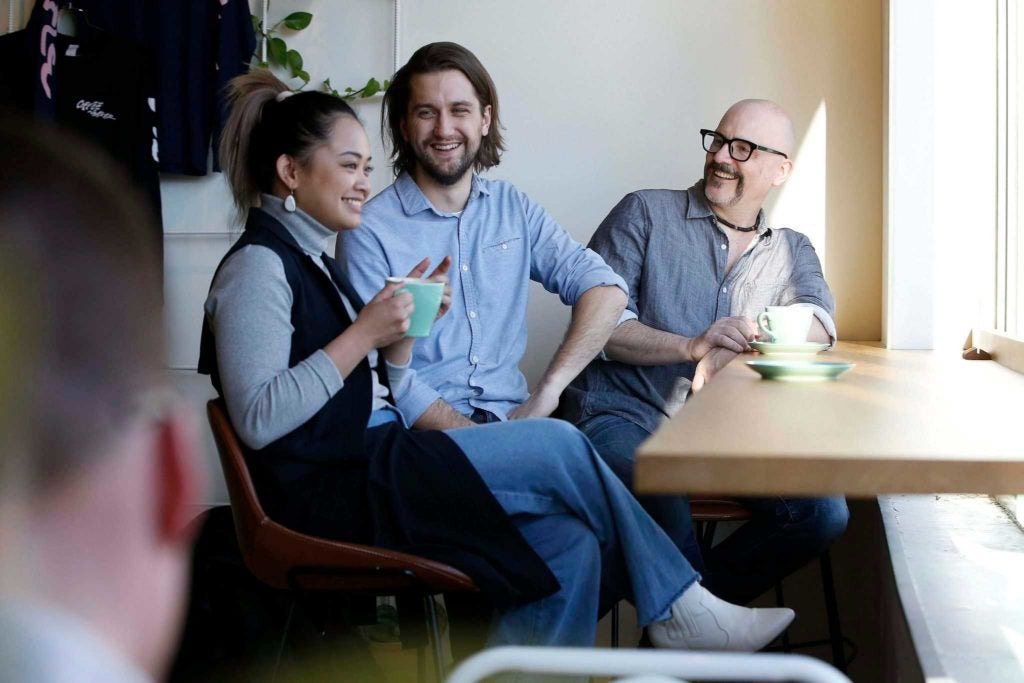 He also completed a number of documentaries, and short films, including “Middle,” which won awards at film festivals in Toronto and Vancouver and “How Much for a Half Kilo?,” which took the top prize at Calgary. All nine of Sean’s short films have international distributors and have been sold to television around the world.

His first feature film, INerTia, was awarded Best First Feature at the 2001 Toronto International Film Festival, and netted him Best Director at the 2001 FilmCan Festival. The Globe & Mail named him one of three “Canadian Filmmakers to Watch” in 2002.

His second feature film, Lucid, won the CityTV award for best Western Canadian Feature at the 2005 Vancouver International Film Festival, was an Audience Award pick at Cinefest and was an official selection at more than 25 film festivals around the world, including Shanghai, Mannheim, Singapore and Toronto.

“I Propose” opens next Friday, September 4 at Vancouver’s Cineplex Theatre at the International Village in Tinseltown and Surrey’s Landmark Cinema at the Guildford Town Centre. Check theatre for showtimes.