SAN FRANCISCO — Alice Bulos always took the high road. Fittingly, a California highway will memorialize the beloved Filipina American leader who dedicated over 40 years of her life to community service until days before she died of heart failure on October 21, 2016.

The California Legislature on Friday, Aug. 28, approved a resolution naming a section of State Route 35 in Daly City as the Alice Pena Bulos Memorial Highway in honor of the first Fil-Am named by a sitting US President (Clinton) to a federal council, among the honoree’s many achievements.  The roadway tribute will be the first known for an American of Filipino descent in the continental United States. 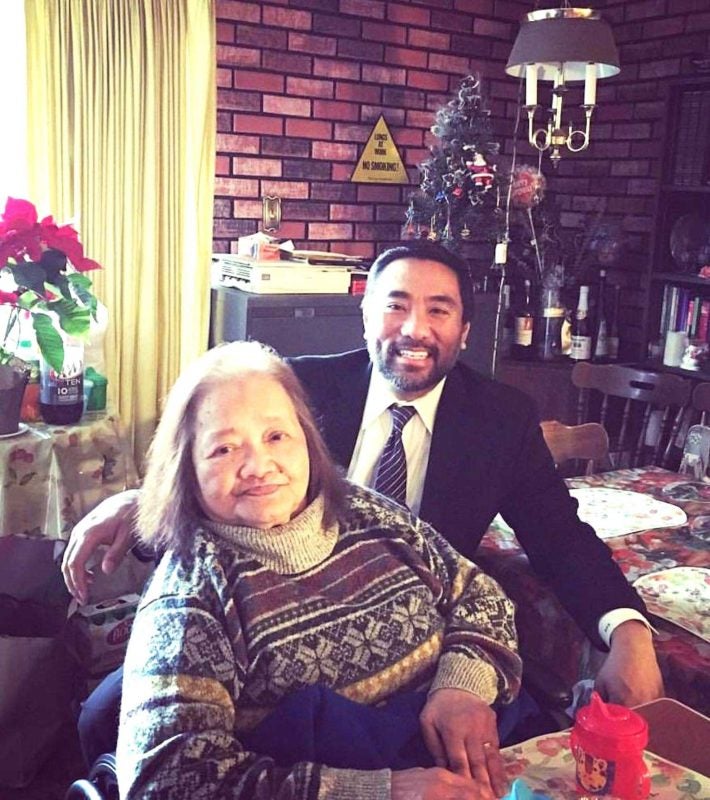 The vote authorizes supporters to raise private funds to defray cost of the new signs bearing Bulos’ full name.  Installation is projected for 2021.

Said portion of State Route 35 traverses Daly City, home of the highest concentration of Filipinos on the US mainland, and whose current political leadership acknowledges Bulos as a role model.

“Alice Bulos meant the world to me.  We formed a special relationship from the moment we met.  She is like family to me, my mentor, confidant, mother, advisor, conscience, and critic.  I loved her dearly and wanted to do something to make sure her name will be memorialized forever,” said Bulos protege and friend Ray Buenaventura, Council Member of Daly City, who initiated the move last summer to “find a way to etch her name for eternity.” 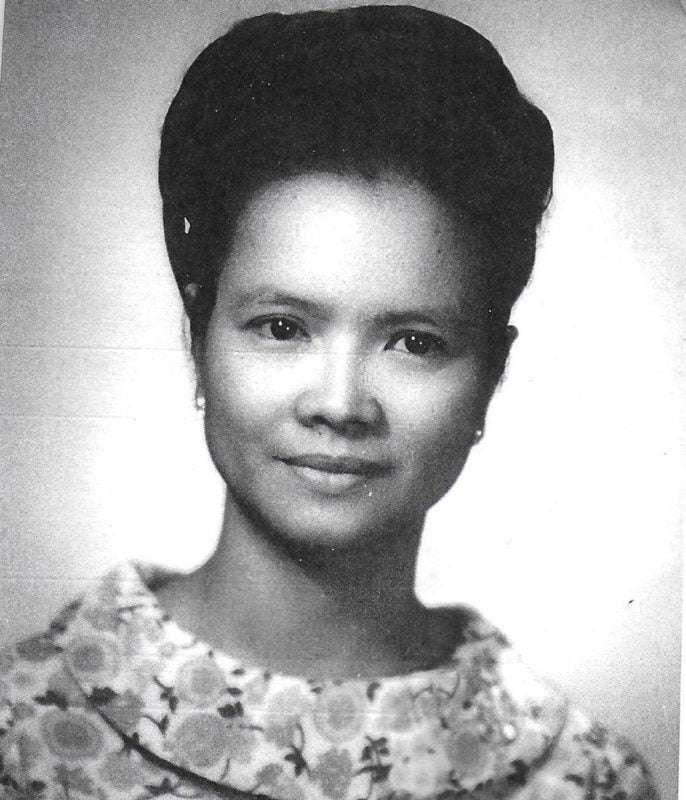 Nueva Ecija-born Alice Pena Bulos left her post as chair of the UST Sociology Dept. to join her lawyer husband Donnie Bulos in the USA in 1972. (Elizabeth Bulos Ramilo)

The private defender-and-politician conferred with Daly City pioneers Perla Ibarrientos and Ray Satorre, who has long bewailed the absence of a city structure named for a Filipino American, thereby literally cementing Fil-Am presence in what’s been dubbed “Little Manila” or “New Manila USA.”

Compounding Buenaventura’s grief was the loss of his “Tita Linda,” longtime Daly City resident and community benefactor Erlinda Tiongco Galeon, who predeceased her own mentor, Bulos, by four months.  As mayor last year, Buenaventura made it his personal mission to honor both Bulos and Galeon, who now has a namesake park inaugurated recently in a Daly City residential area.

Driving through the Barack Obama State Highway in the Los Angeles area clicked a lightbulb in Buenaventura: What were the chances of the same for his departed Tita?

Though a longtime resident of neighboring South San Francisco, Bulos’ influence crossed borders and extended well beyond her home city, noted Assembly Member Phil Ting (D-San Francisco), who agreed to sponsor a bill in the Assembly upon consultation with Buenaventura.

“We see the influence of Alice Peña Bulos throughout our communities, as well as in elected local and state government leadership. That’s why she’s considered the ‘Godmother’ of Filipino American politics and empowerment. It’s my honor to carry the legislation that celebrates her legacy,” Ting responded to Buenaventura’s proposal.

Buenaventura also reached out to the Bulos family for “permission to move forward and honor their mother.”  Elizabeth Bulos Ramilo gave her blessing, and Mayor Buenaventura drafted a resolution naming Highway 35 in Daly City for Bulos that the City Council passed unanimously Sept. 19, 2019.

That document was forwarded to the office of Ting, who introduced Assembly Bill No. 165 ( Alice Peña Bulos Memorial Highway).  Assembly Members Berman, Bonta, Gloria, Mullin, and Muratsuchi, and Senate Members Hill, Pan, and Wiener signed on as co-authors. 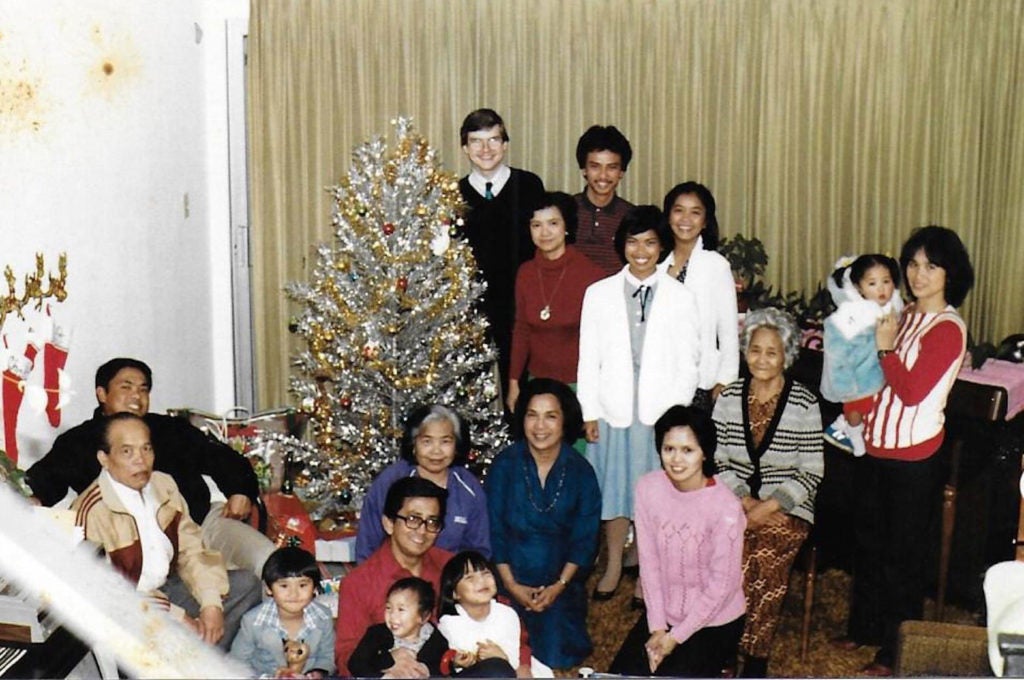 Alice Bulos (standing by Christmas tree) loved being surrounded by family and friends at her home in South San Francisco. (Elizabeth Bulos Ramilo)

The process took a year from the time Buenaventura first discussed his idea with Ting to the approval by the Legislature, manifesting the popularity of Bulos.  Buenaventura estimates cost of the new signs at around $10,000.

The family of the Nueva Ecija-born sociology professor-turned-political activist expressed gratitude to the core group of advocates behind the project, many of them frequent visitors at the Bulos home.

“Our family is so happy, honored, and blessed by this beautiful tribute. There are no words that can help express my deep gratitude for this and acknowledge the work that she dedicated her life to in making a better community not only for the Filipino/a community but for everyone in general.”

“Tita Alice” as mentees refer to their teacher, inspired both US-born and immigrant Filipino Americans.  Her only granddaughter Charity Ramilo, also a school teacher, said her grandmother and grandfather Donnie Bulos “connected and collaborated with the community to make sure our immigrant voice is heard.”

“When they heard that they and others weren’t allowed to work and ‘there’s no jobs for people like them’ that didn’t stop my lola (Tagalog for grandmother). I learned resilience from her, advocating for immigrant rights, especially for Filipinos. I learned the power of voice and fighting for our right to be free and live happily.”

Grandson Clarke Ramilo said he learned “the importance of being there for family and sharing that with others as well.”

The State honor “encourages me to continue working with community organizations and members to advocate for  worker’s rights, immigrant rights, women’s rights, educational and healthcare rights, and the importance of voting and also working with public officials that truly work with our community and the issues we need to address together,” he told Inquirer.net.

He cites his grandmother’s example for his involvement in the Justice for Rainbow Bright Worker’s Campaign, a grass-roots movement supporting the those who suffered in the hands of the owners of a Daly City  facility for older adults charged by the California Attorney General with exploiting fellow Filipinos by grand theft of millions of dollars in wages, human trafficking and rape (see bit.ly/rainbowjustice).  His current advocacy reminds of his grandmother’s formidable figure at demonstrations demanding justice for immigrant workers as she did for airport workers displaced after Sept. 11, 2001.

Alice Pena Bulos gave up the chair of the Sociology Dept. of the University of Santo Tomas in Manila to join her lawyer husband Donnie in the United States in 1972.  They became involved in politics first as supporters of Ronald Reagan.  They soon collaboration with Filipino Americans campaigning for the first gubernatorial run of Jerry Brown, who never fails to bring up his friend Alice Bulos whenever he meets a Filipino American.  They remained deep blue Democrats since.

Bulos always prioritized education and empowerment.  She was loyal to her alma mater, UST, and presided for decades over the alumni association Thomasians USA.  She co-founded the California Filipino American Democratic Caucus, believing the party ideology aligns closest to Filipino values.

Admired for her tenacity and loyalty, Bulos earned respect for her ability to engage in heated political discussion without rancor.  She appreciated the numerous accolades she received and paid her prominence forward by grooming those she observed to possess leadership qualities to take on the mantel of empowering her beloved Filipino American community.