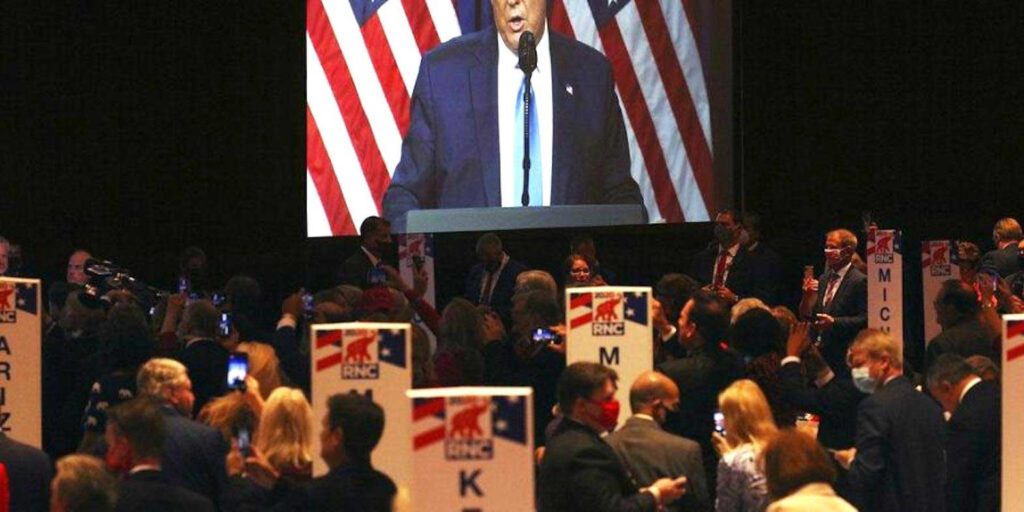 Did you stay to the very end of the bizarre Trumpian cavalcade of mistruths, a/k/a/ The Donald’s acceptance speech at the Covid-compromised Republican National Convention?

If not, you likely missed the part of the RNC that was the most Filipino moment in political convention history.

Mind you, this was not a GOP convention the likes of Reagan, Nixon, or Bush. None of them had ever used the unfair advantage of the White House as a prop, a potential violation of ethical norms and laws that prevent the commingling of governing and campaigning.

No, this was just another abnormal day at the Trump White House, with a convention finale that ended when tenor Christopher Macchio, from the balcony overlooking the South Lawn, belted out a somber and melancholy “Ave Maria.”

“Ave Maria”? Holy Lumpia, I thought I was attending a Filipino funeral. And I have Zoom-attended two of them in the last five months. I figure we’ll see Melania carrying the Santo Nino next? (See below).

But this  “Ave Maria”  was an unintentionally ironic song choice, considering the nation had just passed 180,000 deaths, with more than 5.86 million Covid cases in a pandemic that is our American reality.

Yet Trump continued to boast about his great job handling the coronavirus, from testing to a new vaccine by the end of the year. Whatever he says, the death toll tells a different tale. The U.S. is 4% of the world’s population, but 22% of the world’s Covid-19 deaths.

In that way, Thursday was like the other three nights, a truth-challenged Trumpian convention fantasy but this time on the White House grounds.

Why mention the truth about anything happening right now–like Hurricane Laura or the wildfires in California? Because Trump would have to acknowledge how climate change was real and how stupid it was to pull out of the Paris climate accords. Instead, he praised the pullout and commended FEMA for its great job on Laura. But FEMA just lucked out when the hurricane wasn’t as bad as feared.

And why mention the truth about the police shooting of Jacob Blake the unarmed black man shot seven times by cops in Kenosha, Wisconsin on Sunday, sparking a week of BLM protests?  Trump just mixed it all in with other protests in general to make his law and order case. And all without mentioning Kyle Rittenhouse, a 17-year-old white vigilante and Trump follower, who went up to Kenosha and is accused of killing two people during the protests. That would have cancelled the biggest message in Trump’s 70- minute speech: that a Biden presidency would allow violence and mayhem in the country, enough to strike fear in the hearts of suburban white women everywhere.

They should fear the lawlessness in our country fomented under Trump’s leadership.

There were at least 25 omissions and misstatements from large to larger. Trump said he’d protect Social Security and Medicare, but he wants to cut the payroll tax that funds those two entitlements. Trump said he supports health coverage for pre-existing conditions, while he attempts to dismantle Obamacare in court.

Then again, maybe you stopped listening when Trump called himself the greatest president for Blacks since Abraham Lincoln.

Lyndon B. Johnson, anyone? The 1964 Civil Rights Act and the 1965 Voting Rights Act were probably greater than anything Trump thinks he’s done, as he tries to dismantle those two landmark laws.

As recent polls suggest, Trump has about 30 percent of both Asian and Hispanic voters, but among Blacks, one poll puts support for Trump at less than ten percent. No wonder Trump was catering to Blacks throughout the convention, featuring one Black speaker after another. It’s his best shot at drawing a few votes away from Biden that could make a difference in a swing state. There’s also a high number of undecided Asian Americans.

But while you saw Sean Reyes, the Filipino American attorney general from Utah, you didn’t see the RNC play to any of us. No mention of Filipino nurses when talking about front-line workers. No highlighting of his Justice Department’s shameful use of Asian Americans in fighting affirmative action. But Blacks? Trump was looking for their votes all four nights–because he’s the best president for Blacks since Lincoln.

Still, nothing quite says, “liar, liar” quite like Trump’s gaslighting of the entire Covid crisis.

The No-Masquerade Ball
We’ll have to wait and see if Trump’s RNC finale at the White House for 1,500 non-socially distanced people turns into a super-spreading no-Masquerade Ball.

In 30 days, will we begin to see people testing positive for coronavirus, leading to this election year’s October Surprise—a spike in cases?

Does Trump care? After four days of a Republican National Convention, we can confirm he suffers from E.D. Empathy dysfunction.

It’s especially true when it comes to Covid, the scourge of the nation. Trump and his followers could barely get worked up about the reality. On Day 2, economic advisor Larry Kudlow was a big Covid denier, speaking of the pandemic in the past tense. Is it lying if you speak a truth that hasn’t become a truth yet?

But my vote for most impressive duplicitous speaker goes to First Lady Melania Trump. She did what no one else could do. She made Trump human. Like he cared about Covid.

“My deepest sympa-tee,” Melania said, sounding like my Manang Marissa. The First Lady sent a message “to everyone who has lost a loved one,” and expressed how her “prayers are with those who are ill or are suffering. I know many people are anxious, and some feel helpless. I want you to know, you’re not alone.”

Someone named Trump cares about us? Our country? “America is in his heart,” Melania said of Donald. You mean like Filipino writer Carlos Bulosan? Doubt it.

And then she pivoted to conclude that her husband “is what is best for our country.” So much for logic and credibility.

“Total honesty is what we as citizens deserve from our president,” Melania said. “Whether you like it or not, you always know what he’s thinking.” (Probably something like “I could be playing golf instead of reading an intelligence briefing book.”)

During her speech, the screen did show Trump in perhaps his best look. He wasn’t tweeting. He was quiet.

I don’t know what he was thinking. But as he watched her speak, I could imagine him seeing Melania as his secret weapon.

As she stood at the podium in her fashionably authoritarian pantsuit, complete with epaulets fitting for a generalissima, she talked about Trump in a way no one else can.

I expect her to be the humanizer—the one who balances out Trump whenever he goes apoplectic.

Remember, Trump was down double digits going into this convention. But I see now that Melania on Day 2 was his “Hail Mary.”

It had to have given him he confidence to pull off the finale, the Washington outsider on the South Lawn, speaking this wild and angry rhetoric to be fearful of ourselves.

Could work. Unless people see the truth for themselves. Like understanding how we got to the more than 180,000 Covid deaths. That’s like a whole town the size of Rancho Cucamonga, California. Gone. Only by November 3, the death toll more likely will be closer to 200,000, with the dead  disproportionately people of color.

And then we could all be singing a funereal “Ave Maria.”

Emil Guillermo is a journalist and commentator. He writes a column for the Inquirer.net’s North American bureau. Twitter @emilamok. Listen to his podcasts on www.amok.com