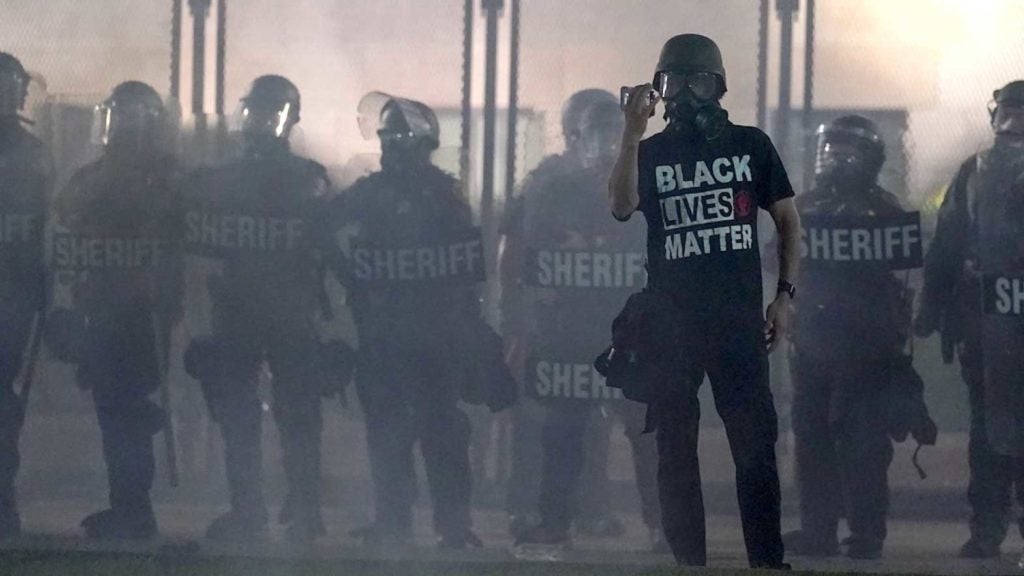 In this Aug. 25, 2020 file photo, a protester holds up a phone as he stands in front of authorities in Kenosha, Wis. (AP Photo/Morry Gash, File)

Part of my morning routine these past two weeks is checking the air quality in our corner of the Bay Area.

These past two days were good. Breathable. Healthy.

But before that, there were constant warnings. The air was either “moderate,” “unhealthy for sensitive groups,” or just plain “unhealthy,” or “very unhealthy.”

You sometimes don’t even need to check a website. You smell the smoke, the bad air once you step outside the house.

Several major fires hit the San Francisco Bay Area in the last few weeks, triggered by a series of lightning storms. The storms were spectacular but they turned out also to be destructive.

A couple of days after the lightning strikes, we woke up to haze in the sky, which I thought initially was fog, but which turned out to be smoke. We quickly found out that there were wildfires in many parts of the Bay Area. Two of them — one near Napa and Vallejo and the other near Santa Cruz —  were huge, covering more than 360,000 acres.

It got so bad that we were told to prepare for a possible evacuation over the weekend. The fires were far away, but another lightning storm was coming. Fire authorities told residents in our area that they were so spread thin they would not be able to issue a warning or even respond immediately in the event of new fires. So we should just leave if there are reports of new fires near where we were.

But fortunately that wasn’t necessary. The lightning strikes did start new fires, but in areas that were far from us.

The one problem we continued to struggle with was the bad air. Smoky. Unbreathable. Unhealthy.

That was frustrating. We were already reeling from the pandemic which made us cautious and fearful of breathing contaminated air, forcing us to wear masks and avoid crowded, enclosed spaces.

But despite the isolation, we were at least still able to go on long walks or bike rides. The Bay Area has always been known for clean air.

Suddenly, we were enveloped by bad air. We were getting suffocated.

That’s what 2020 has been for most of us, of course, a suffocating year.

The bad air went away a few days ago. Finally, we’re able to go on long walks and long bike rides again, even as we maintain distance from others, strangers and friends alike.

But the suffocation continues. After the pandemic came the upheaval over the brutal murder of an African American in Minneapolis who cried out, “I can’t breathe,” as a cop kneeld on his neck.

Then last week, in Kenosha, Wisconsin, another African American, Jacob Blake, was shot seven times in the back by another white policeman, a bizarre, insane, cruel, inexplicable attack.

Shot seven times in the back as he was opening the door of his car! Seven times! Why?

We’re able to breathe again in the Bay Area. The fires are under control. The smoky, bad air is gone.

“It’s amazing to me why we keep loving this country, and this country does not love us back. It’s really so sad. I should just be a coach. I’m so often reminded of my color. It’s just really sad. We’ve got to do better. But we got to demand better.