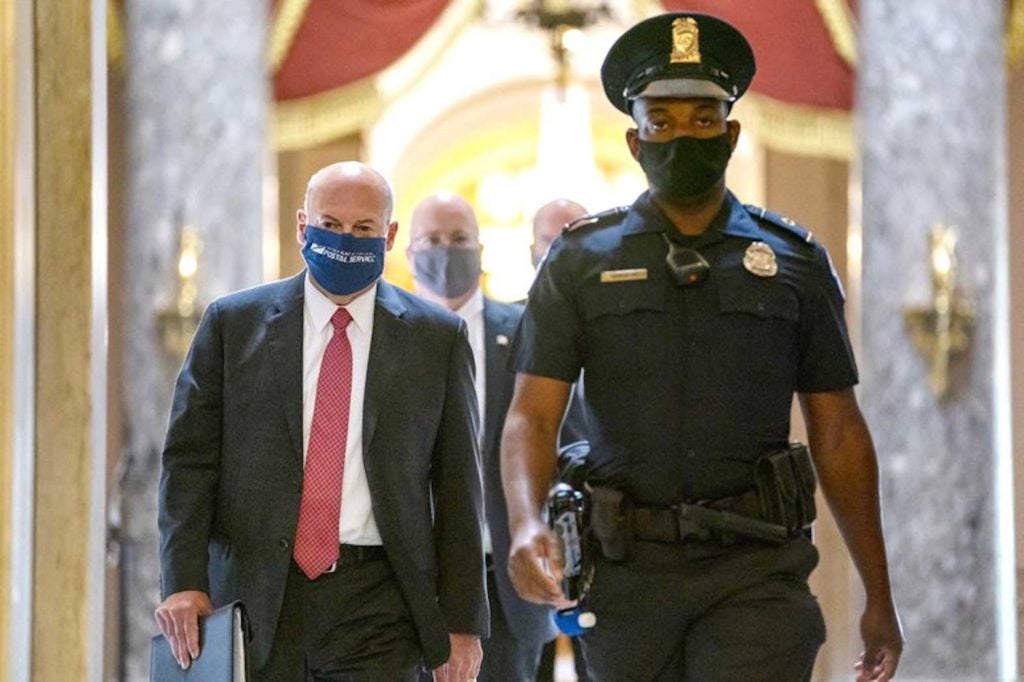 WASHINGTON — Louis DeJoy, the embattled leader of the U.S. Postal Service, is the first postmaster general in nearly two decades who is not a career postal employee. That doesn’t mean he’s unfamiliar with the agency.

The wealthy Republican donor owned a logistics business that was a longtime Postal Service contractor, and he has significant financial stakes in companies that do business or compete with the agency. That has led critics to question whether he has conflicts of interest, something DeJoy is almost certain to be asked about during two days of testimony beginning Friday before congressional committees.

DeJoy also has come under scrutiny for policies that have slowed mail deliveries and raised fears of chaos in the November presidential election.

“All these so-called cuts that happened in the middle of the night, it’s hard to understand how the postmaster general could believe he could do this and nobody would find out,” said S. David Fineman, a former chairman and member of the agency’s board of governors.

DeJoy, 63, took over June and pledged an overhaul. The Postal Service is struggling financially under a decline in mail volume, the coronavirus pandemic and a congressional requirement to fund in advance its retiree health care benefits. Democrats say the process that led to his appointment was opaque and they have questioned whether political patronage was involved.

DeJoy and his wife, Aldona Wos, have a history of donating to conservative causes and Republican candidates, including $1.2 million to President Donald Trump’s election efforts. DeJoy is on the board of The Fund for American Studies, a Washington nonprofit dedicated to “the ideas of liberty, limited government and free markets,” to which his family’s charitable foundation has contributed more than $350,000.

Until he took over the Postal Service, he was the deputy finance chairman of the Republican National Committee.

He built New Breed Logistics, a small New York shipping company he inherited from his father, into a national operator that has collected more than $120 million through government contracts from the mid-1990s until he sold the business for $615 million in 2014, according to an Associated Press review of federal spending data. The company contracted with the post office.

He holds significant financial stakes in companies that both do business and compete with the Postal Service, something critics argue could present a conflict of interest.

In a statement, the Postal Service said DeJoy has made all required financial disclosures but that he might have to divest some holdings if conflicts arise.

“I take my ethical obligations seriously, and I have done what is necessary to ensure that I am and will remain in compliance with those obligations,” DeJoy said.

After New Breed Logistics merged with XPO Logistics, DeJoy continued to lead a subsidiary of the international conglomerate until he retired in 2015. He served on XPO’s board until 2018 and currently has holdings in the company valued as high as $75 million, with stock options that are potentially worth millions more. Since the 2014 merger, XPO has lined up more than $500 million in federal work, which continues to this day, records show.

DeJoy’s financial disclosure shows he also has between $7 million and $35 million invested in the private equity firm,Warburg Pincus, which has holdings in both Postal Service contractors and its competitors.

DeJoy and his family made inroads to elite GOP circles during the presidency of George W. Bush.

His wife was a “ranger” for Bush’s 2004 reelection campaign, a designation reserved for donors who tapped their personal and professional networks to bundle more than $200,000 in contributions.

Around the same time, New Breed Logistics’ receipt of federal contracts picked up. Between 2003 and 2009, the company was awarded contracts worth $59 million, according to federal spending data. Bush appointed Wos to serve as ambassador to Estonia, the kind of diplomatic reward that presidents commonly bestow on top donors. Currently, she is Trump’s nominee to be ambassador to Canada.

The connections DeJoy and his wife have made with Republican elected officials have been cultivated for years, particularly in North Carolina.

Their family’s nonprofit has doled out millions to charities and conservative groups, including the Jesse Helms Center, which was created to promote causes advocated by the late North Carolina senator, who had a long history of making racist and homophobic remarks.

Wos, who is a physician, was appointed to lead North Carolina’s Department of Health and Human Services by then-Republican Gov. Pat McCrory, whose candidacy benefited from the family’s donations. She left the agency in 2015 after a rocky tenure.

As postmaster general, DeJoy has put in place or proposed operational changes that have disrupted deliveries and set off legal challenges from more than 20 states. Lawmakers pressed DeJoy for the rationale behind his actions and repeatedly complained that he has not being forthcoming about his policies, leading the agency’s inspector general to open an inquiry.

At the same time, Trump has acknowledged that he is blocking an emergency aid package for the Postal Service to make it more difficult for the agency to process mail-in ballots.

The White House has moved to calm tensions. Mark Meadows, the president’s chief of staff, has said mail processing machines won’t be decommissioned between now and Election Day, Nov. 3, and stressed that Trump has had no say in any operational decisions at the agency.

In an abrupt reversal earlier this week, DeJoy released a statement that said he would “suspend” several initiatives until after the fall vote “to avoid even the appearance of impact on election mail.”

DeJoy said he would postpone the removal of mail-processing machines, while making no mention of equipment that has already been taken offline because of declines in mail volume. House Speaker Nancy Pelsoi, D-Calif., later said DeJoy told her that he has no intention of replacing the decommissioned sorting machines. A postal union spokesman said the machines were set to be taken out of service before DeJoy took over the agency.

The postmaster general also said he was pausing the removal of collection boxes, a step already announced by a postal spokeswoman who said the measure is routine and based on mail density. DeJoy added that no mail processing facilities will be closed and said the agency has not eliminated overtime.