US nursing home cases up nearly 80% in Covid-19 rebound 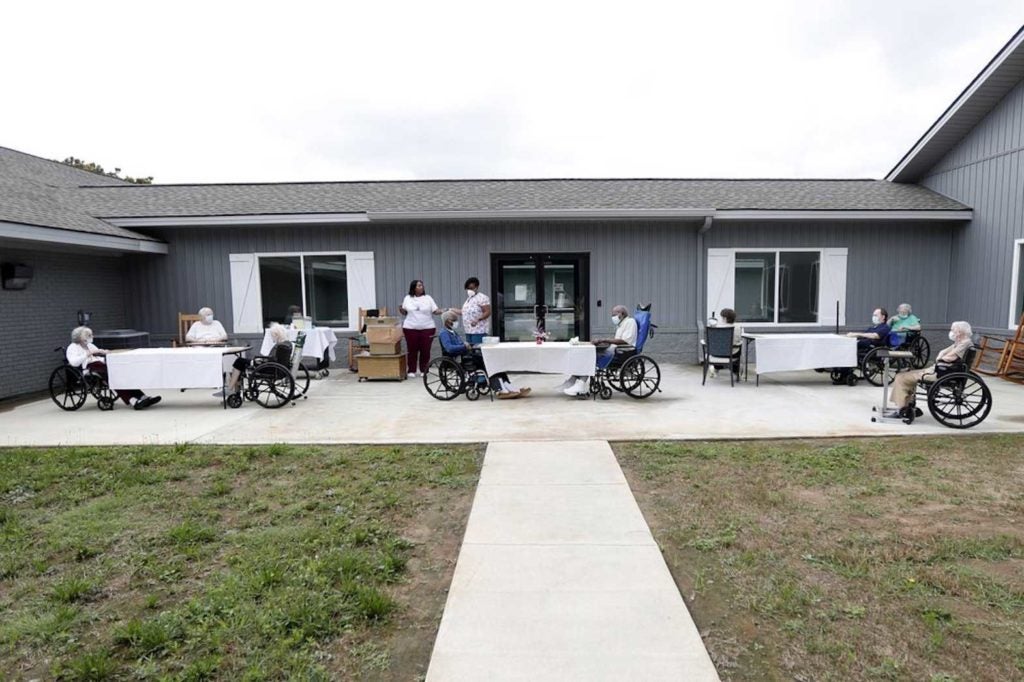 In this June 25, 2020, file photo, residents at the Southern Pines nursing home are separated and wear face coverings during their daily bingo game in Warner Robins, Ga. A new report says COVID-19 cases in U.S. nursing homes jumped nearly 80% earlier this summer, driven by rampant spread across the South and much of the West. (AP Photo/John Bazemore, File)

WASHINGTON — COVID-19 cases in U.S. nursing homes jumped nearly 80% earlier this summer, driven by rampant spread across the South and much of the West, according to an industry report released Monday.

“The case numbers suggest the problem is far from solved,” said Tamara Konetzka, a research professor at the University of Chicago, who specializes in long-term care. She was not involved with the study.

Long-term care facilities account for less than 1% of the U.S. population, but more than 40 percent of COVID-19 deaths, according to the COVID Tracking Project.

The situation is a politically sensitive issue for President Donald Trump, who is scrambling to hold on to support from older voters as polls show disapproval of his administration’s response to the pandemic.

The White House announced in late July the release of $5 billion for nursing homes, while launching a program to equip each of some 15,000 facilities with a fast-test machine to screen residents and staff for the coronavirus.

Monday’s study from the American Health Care Association found there were 9,715 coronavirus cases in nursing homes the week starting July 26, a 77% increase from a low point the week of June 21. The group is the industry’s main trade association.

Nursing homes in Sunbelt states had more time to prepare than facilities in the Northeast that were hit in late winter and early spring, with grim results. But Konetzka and other researchers have been warning that once a community anywhere experiences an outbreak, it’s only a matter of time before the coronavirus enters its nursing homes. A leading theory is that staffers who don’t yet know they’re infected unwittingly bring the virus in. Inside, the coronavirus encounters an ideal environment in which to spread among frail older people living in close quarters.

“As the virus surges in Sunbelt states, there’s no reason to think it won’t affect nursing homes in the same way it did in states that surged earlier,” said Konetzka. “We have learned some things about how to minimize the effect in nursing homes, but providers need the tools to implement those best practices. This is the critical role of federal policy that has not been fulfilled— securing supply chains for (personal protective equipment) and rapid testing.”

The industry analysis illustrates the march of the virus across the U.S.

As of the week of May 31, fewer than one-third of the weekly coronavirus cases were from nursing homes in Sunbelt states. But by the week starting July 26, that share was 78%.

Deaths followed a similar pattern. Nursing homes in states across the South and parts of the West accounted for 28% of deaths the week of May 31. That share was 69% by the week starting July 26.

The Trump administration says it’s executing on its plan to provide fast-test machines to nursing homes and make sure that all facilities have the protective equipment they need. But Seema Verma, head of the Centers for Medicare and Medicaid Services, said states and nursing homes also have responsibility to safeguard residents. She called on nursing homes to step up their game.

“The reality is that (a) facility’s infection control practices is the number one factor leading to the spread of COVID within these facilities,” Verma said in a statement. Inspectors “have seen staff forgetting to wash their hands, congregating in break rooms, and wearing (protective equipment) improperly. All the testing in the world is for naught if staff don’t adhere to the basic, longstanding infection control practices that the federal government has had in place for years.”

Mark Parkinson, head of the nursing home trade group that produced the study, said the problem is bigger.

Parkinson said that about 10% of facilities still report lacking an adequate supply of N95 masks, considered standard for hospital personnel.

He said the administration’s effort to distribute fast-test machines could be a “game changer,” but added “there’s still a long way to go.” Distribution is expected to be completed by the end of September.

In the meantime, Parkinson said it can still take three days, and sometimes more, to get results. “We continue to be plagued with a testing problem,” he said.

Guidelines call for nursing homes to test all residents at least once, and staffers on a regular basis.

Health and Human Services spokeswoman Mia Heck said, “We are prepared to exert our full authority to make sure the most vulnerable are being tested.”

The nursing home association is urging states struggling with the latest coronavirus surge to enact mandates for people to wear masks, saying it would indirectly benefit residents cloistered in such facilities. “There’s a direct link between COVID in the community and COVID in the building,” Parkinson said.