Remembering Manang Dolores – ‘It is what it is’? 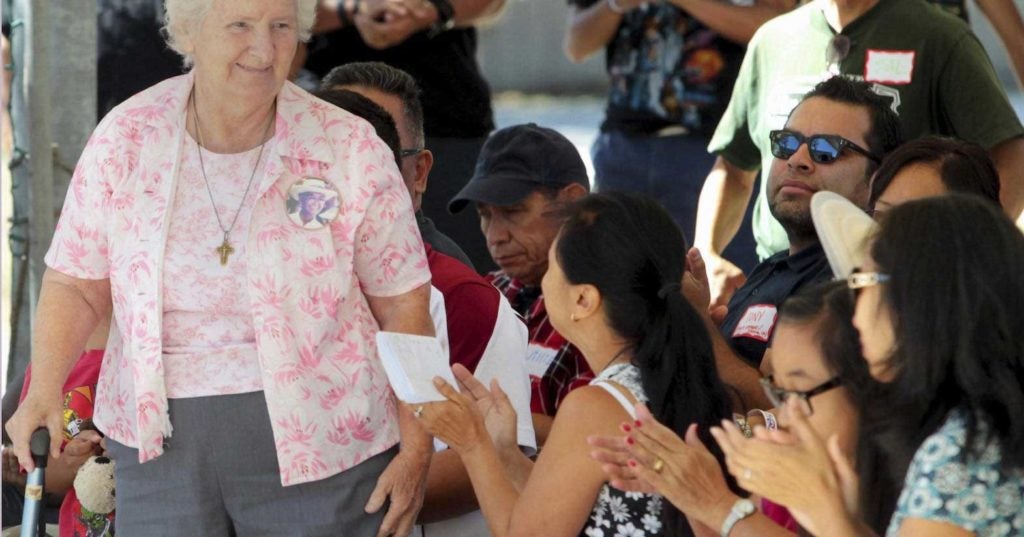 When I found out the widow of UFW labor leader Pete Velasco was in a hospital battling Covid-19 earlier this week, I was praying for a rallying cry.

Dolores Velasco was hanging on to her life in a Tehachapi, California hospital near where the Filipino farm workers fought the ag industry and made history.

But she spent her final days fighting hard not to be part of an historic surge in the pandemic. Velasco was in and out of alertness, according to her friends, who knew she needed to hear something hopeful. Something more than the president’s, “It is what it is.”

How empty those words must have sounded to Velasco, or anyone else struggling against the virus. We all could say in unison, “Mr. President, you are not doing enough.”

Despite what Trump says, the Covid crisis is not “just going away.” The nation’s case count is nearing 5 million. The U.S. is just five percent of the world’s population but has up to 25 percent of the infections.

More startling is the death count nearing 160,000, with more than 1,000 people dying each day. This week saw the highest one-day death toll in two months.

“The numbers don’t lie,” Dr. Anthony Fauci said during a Harvard Public Health meeting on Wednesday. And yet all Trump can say is “It is what it is”? It’s the president’s socially distant response in these socially distant times. But it’s a far cry from what we need as a nation.

Perhaps we shouldn’t expect much from a man who believes he has done more civil rights than LBJ (you know, the guy who got the Civil Rights Act and the Voting Rights Act passed). Trump even says he’s not sure what impact Rep. John Lewis (Selma marcher/Voting Rights advocate) had on America.

Still, it’s not too much to demand a sense of caring from the president of the United States (put that on your checklist as you evaluate whom you might vote for in November). These are the days when Americans are dying or are near death like Dolores Velasco, trying hard not to be a forgotten statistic.

Friends of Velasco put out a message to the Filipino community on social media on Tuesday night that Manang Dolores was urgently in need of a good word. A card, a sentiment  would help lift her spirits as she hangs on to life in a closed off room in the Tehachapi Hospital.

It’s something to provide comfort and a way to connect. A lot more than a president’s “It is what it is.” But by early Thursday morning, it was too late.

From nun to activist

Called “Manang” Dolores in the community  by virtue of her age and respect of her status, Dolores Neubauer was first known as Sister Dolores Ann when she first met Pete Velasco, the co-founder and longtime Secretary/Treasurer of the United Farm Workers of America in 1974.

Velasco was continuing the work started by Larry Itliong who was the leader of the Filipino workers union that really started the 1965 Delano grape strike, a key moment in civil rights and labor movement history.  Cesar Chavez joined in later to provide the migrant labor force that created the UFW, but the Filipinos were there first.

After the UFW was birthed, Pete Velasco took an active role in the national boycott against Gallo wine and iceberg lettuce and was headquartered in Baltimore, according to a note housed in the UCSD library that appears to be written by Dolores Velasco.

She recalls how in 1975 Pete was re-assigned from Baltimore to California to organize workers in the central coast of Santa Maria. She describes an incident when Pete and another unionist was attacked by six Teamster at Koyama Farms, Aug. 21, 1975. She said the Teamsters were carrying knives and kicked Pete Velasco, then 65, in the neck and back.  Another incident describes how Pete Velasco and five UFW representatives were arrested for talking to workers about the union before the work day.

“The grower got so angry, he insisted they be arrested,” Dolores Velasco wrote. “He dragged Brother Pete Velasco 75 feet while the deputy sheriffs looked on, doing nothing to protect Peter.”

The violence brought forth a “serious decision” that Dolores Velasco had to make. That year, after 21 years as a nun, Sister Dolores Ann became Miss Dolores Ann Neubauer. In November of that year, she left to join Pete in California where they organized workers together  in the fields every morning.

By Dec. 12, 1975, they were married in the Agbayani Village home, built by the UFW for the senior workers and their families. They spent 20 years together making what John Lewis would call the “good trouble” until Pete Velasco’s death in 1995.

Manang Dolores lived on at the Agbayani Village near Delano, where I met her briefly in 2016 for the 50thanniversary of the Delano Grape Strike. It was a brief hello. She had a button with Velasco’s picture on her shirt. She spent most of her days keeping alive the stories of the activism she shared with her husband.

It was a month ago, on July 10, Manang Dolores tested positive for Covid-19. After three more positive tests, she remained in a hospital near La Paz, where due to the Covid protocols, she was not allowed visitors .

Teresa Romero, the current president of the UFW, told friends on Tuesday that Velasco was not in pain nor in need of a respirator, though she did experience shortness of breath. Romero said Velasco is sleeping most of the time, not eating, and is suffering from some signs of dementia.

Still, Romero felt compelled to reach out in social media.

Union activists, regular folks, people who understand the human condition know you have to say a bit more than “It is what it is.” They know that sometimes  a strong rallying cry is all that’s needed to turn around the impossible.

But by Thursday morning, it was too late, for the former nun turned activist who had become a Filipina for life.

Emil Guillermo is a journalist and commentator. He writes a column for the Inquirer.net’s North American bureau. Twitter @emilamok. Listen to his podcast, Emil Amok’s Takeout on www.amok.com