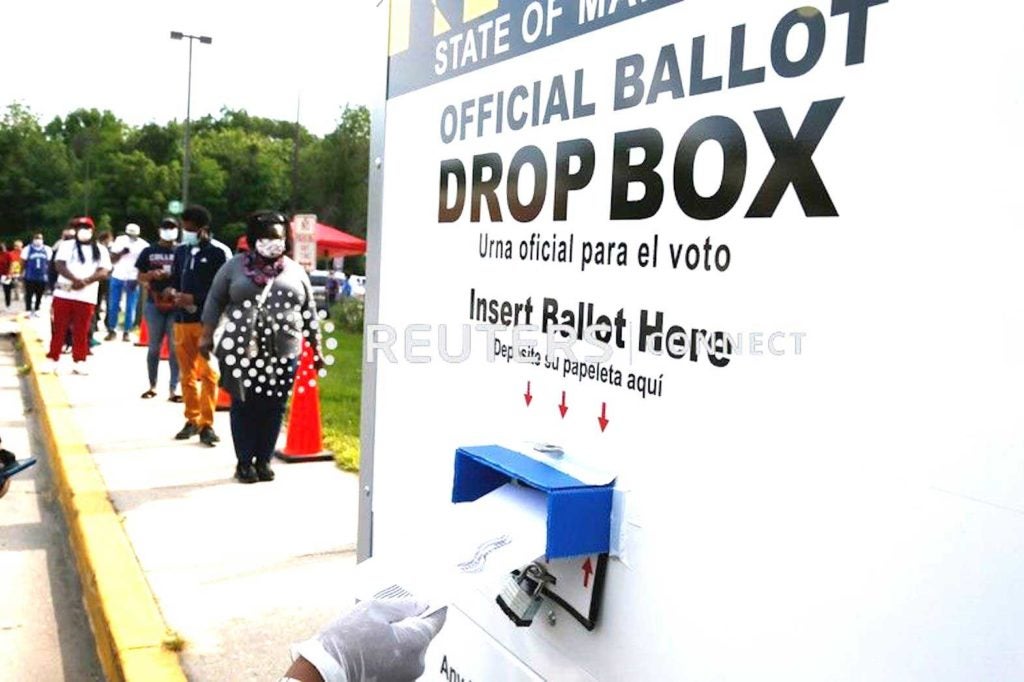 A voter places their ballot in a curbside ballot drop box to help prevent the spread of coronavirus disease (COVID-19) during the Maryland U.S. presidential primary election as other voters stand in a long line waiting to cast their votes in College Park, Maryland, U.S., June 2, 2020. REUTERS/Jim Bourg

NEW YORK — Two thirds of registered American voters oppose delaying the Nov. 3 presidential election due to the coronavirus pandemic, and more than half think President Donald Trump floated the idea of postponing it last week to help himself politically, according to Reuters/Ipsos polling released on Wednesday.

The national public opinion poll was conducted from July 31 to Aug. 4, shortly after Trump said without providing evidence that a surge in mail-in voting would lead to widespread voter fraud and suggested the election be delayed. The idea was immediately rejected by Democrats and Republicans in Congress, who have sole authority to change the election date.

Most Americans also rejected the suggestion. The poll showed 66% of registered voters oppose postponing the November vote, including 8 out of 10 Democrats and 5 in 10 Republicans.

Another 23% of registered voters – mostly Republicans – supported an election delay and 11% said they were not sure.

A separate Reuters/Ipsos poll conducted Aug. 3-4 found that Democratic candidate Joe Biden leads Trump by 10 percentage points in support among registered voters, less than 100 days before the presidential election. A plurality, 44%, believe Biden would be better than Trump at steering the nation’s response to the pandemic.

Asked why they thought Trump wanted to postpone the election, 54% of registered voters suggested they thought Trump was trying to help himself get re-elected. Some 42% said Trump “thinks he will have a better chance of winning if the election is postponed” and 12% said the president “wants to distract the country from the pandemic and the economy.”

Another 21% said they thought Trump was concerned about voter fraud, and 10% said Trump “wants to protect Americans from the spread of coronavirus at polling locations.”

Americans were split along party lines over Trump’s intentions, with Democrats largely suspecting the president of trying to benefit himself politically and Republicans largely agreeing with Trump’s rationale of protecting the integrity of American elections.

Some legal experts warned that Trump’s repeated attacks could undermine his supporters’ faith in the election process and could make it harder for them to accept the results should he lose.

The coronavirus pandemic, which has infected millions of Americans and killed more than 155,000, has dramatically transformed the U.S. political landscape.

Concerns about the virus have rattled many voters who had planned on casting their ballots in person and have led to an unprecedented volume of mail-in ballots during the presidential nominating contests this year. Criticism of his pandemic response has also cut into Trump’s popularity with the American people.

About 57% of Americans said they disapproved of the way Trump was dealing with the COVID-19 pandemic, while 38% approved, according to the Aug. 3-4 poll.

The Reuters/Ipsos poll was conducted online, in English, throughout the United States. The July 31-Aug. 3 poll gathered responses from 882 registered voters, while another 964 registered voters responded in a separate Aug. 3-4 poll. The surveys have a credibility interval, a measure of precision, of plus or minus 4 percentage points.