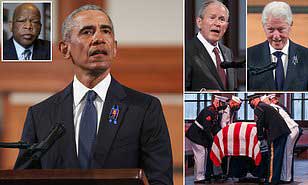 U.S. Congressman John Lewis, a man of non-violence and love, who made an impact on human rights and civil rights throughout the country and the world, was laid to rest on Thursday.

Who was missing? The man who really doesn’t belong in a group of presidents. Donald Trump didn’t even mention Lewis at his press conference late in the day.

Lewis’ life was dedicated to “good trouble,” fighting for what’s right.  In fact, on his death bed, he told his friend, William Campbell, the former mayor of Atlanta, his dying wish. “Everyone has to vote in November,” Lewis said to Campbell. “It is the most important election, ever.”

Trump, on the other hand, started the day concocting what Lewis might call “bad trouble.” Trump tweeted that mail-in ballots would be “inaccurate and fraudulent.” That it would be a “great embarrassment to the USA.” (You mean, more than Trump himself?)

Then Trump declared: “Delay the Election until people can properly, securely and safely vote.”

Trump doesn’t have the power to delay an election,  only Congress does.  No presidential election has ever been delayed. Ever. And as far as mail-in ballots are concerned, studies have shown little to ZERO fraud.

Throughout the day, Congressional Republicans like Senator Mitch McConnell and Rep. Kevin McCarthy,  spoke out against the president’s trial balloon.  But Trump held steady, and then at his afternoon press conference, looked into his crystal ball and said this about the election. “They’ll be fixed, they’ll be rigged,” Trump said.

So presidential. Our leader casting doubt on the upcoming elections, perhaps doing more damage than the Russians could ever do to undermine American democracy.

This is America, right? I was already shaking my head from something Trump did earlier in the week.

Once again Trump was on Twitter and retweeted a  message from Dr. Stella Immanuel of Houston. She’s a pastor/doctor who doesn’t believe in masks but believes in the power of hydroxychloroquine to cure Covid-19. Can you hear Brother Donald say “Amen”? Trump actually gave a full throated “I do believe” endorsement of hydroxychloroquine from the White House briefing room– despite scientific studies that have disproven the drug’s effectiveness. And even after reports surfaced showing Dr. Immanuel also believes that demons can make you pregnant and that the government is run by reptilians, when questioned by reporters, Trump stood by his doc Wednesday morning.

This is not some wacky Third World authoritarian but the leader of the free world.

It’s actually emboldened me, the son of Filipino immigrants, my path obscured by our society’s institutional and systemic racism.

I realize now, I’m still younger than Trump or Biden. I still have a chance. There’s still time for me to be president!

I’ve said it numerous times throughout the last four years. (You have too?)

I can’t be worse than this guy. Why did I ever think I couldn’t grow up to be more than the White House steward—but the main resident of the whole building!

That’s how poor a job Donald Trump is doing. He gives hope to all BIPOC.

Trump has all the advantages and he’s still screwing up this bad? Yep.

Watching the recent policy whiplash is enough to make us all sick.

The array of issues: Will schools open? Stay closed? Trump says rules are too tough. No problem, the CDC accommodates. And states like Tennessee are ready to open, despite a 30 percent increase of school-age children testing positive for Covid-19 to 9,085.

On extending stimulus aid–who gets more aid? Just the corporates, screw the unincorporated regular folks—the wage slaves? Given the worse GDP dive ever recorded, will anything meaningful be done to bail out the American public?

Shall we re-open faster–despite 70,000+ new Covid cases a day? Wuhan had just 70,000 cases, period. The U.S. is breaking records every day. And what about masks? Trump seemed on board with masks a week ago. Masking is good. But the debate didn’t end. Trump and his ilk still seem to think to mask is emasculating. (Shall we pray for Texas Rep. Louie Gohmert who tested positive for the virus, even though he implies he may have gotten sick from a mask!)

Trump does, however, believe in masking federal agents and their actions and unmasking and arresting “anarchists” wherever they may be—damn the Constitution.

On Wednesday, the president made a comment doubling down on the sending of more federal agents to the demonstrations in Portland. Two hours later, the Governor of Oregon announced the agents will be withdrawn because the state is stepping up.

Is everything being negotiated out loud? Or were the Feds exposed in the House Judiciary Committee hearing this week of Attorney General William Barr, the great Trump enabler?

At the hearing, California Congressman Ted Lieu laid out how “probable cause,” the legal standard for arresting someone, should work. Citing the black letter law (Dunaway v. New York) that has guided the Supreme Court for 40 years on the Fourth Amendment, Lieu gave the example of a protester who was standing peacefully, then forced into an unmarked van and taken to a separate location to be searched, detained, and questioned.

“That is what police states do; that’s what an authoritarian regime [does],” Lieu schooled Barr.

Lieu characterized other arrests during the Portland demonstrations and how people were held illegally, then later released because there was no probable cause.

“I urge you to instruct your federal agents to comply with the Constitution,” Lieu said. “And I ask you to investigate these arrests because many of them are in violation of the Fourth Amendment. We do not live in a police state, we’re better than that.”

Also check out Rep. Pramila Jayapal of Washington and her grilling of Barr on how he selectively metes out the brutishness of his authority. He restricts the First Amendment rights of BLM protesters, but allows freedoms to those who benefit his boss. Example: Barr condoned the gassing and brutalization of BLM protesters in Lafayette Square but took no action on unruly pro-Trump protesters calling for the beheading of Michigan Gov. Gretchen Whitmer.

Watching Barr was good. He wasn’t allowed to be defensive. Democrats reclaimed their time on any wordy responses. Barr had to sit and hear why he is perceived as being the president’s lawyer, and not the lawyer of the people.

But the scariest questions to come out of the hearing had to do with the transition of power, voting rights, and the validity of mail-in ballots. Rep. Hakeem Jeffries of New York asked: Would Trump accept the election results and just leave? In other words, would Barr stay on and create the constitutional breach to allow Trump to remain in the White House?

Barr: “If the results were clear, I would leave office.”

Things are never clear with Trump. What could Barr do to enable Trump to extend his worn out welcome?

As the politics play out, the numbers mount on the Covid map.

This is our sick America today. Don’t even call it the United States.

Earlier, Barr praised Trump on Fox Radio for his “superb” leadership. But there’s nothing superb about more than 150,000 Americans dead in a pandemic.

And it’s all because the president is unable to lead or think about how to best serve all of us in this great country. Either America is too big? Or Trump’s vision too small? Leave it to the governors and the locals, he says. Small government conservatives are getting their dream come true. With Trump’s lack of leadership, the feds have been all but neutered, acting boldly only when the federal role can benefit Trump, who has turned America into his own self-service democracy of one.

Emil Guillermo is a journalist and commentator. He write a column for the North American Bureau of Inquirer.net. Twitter @emilamok  Listen to “Emil Amok’s Takeout” on amok.com