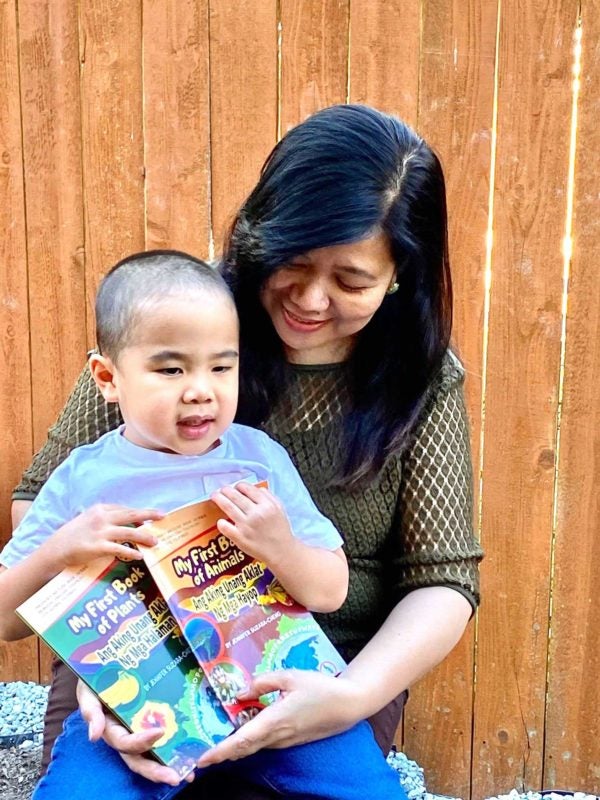 The four-year-old boy on Lola Jenny’s lap tries to mimic her sound, his small finger pointing at the picture of the kuwago, an owl.

“I am writing story books that have rural Philippines in the background and are environmental in nature. My ultimate inspiration is my grandson, who was born here (in the US). I want him and countless children of Filipino descent to know our language, our country, and the global environment,” Suzara-Cheng says.

When her grandson was born, Suzara-Cheng became Lola Jenny. Lola is a Tagalog word for grandmother.

For her American-born grandson who has two grandmothers from different cultures, Suzara-Cheng says she is a Grandma-Lola – depicting her ethnicity and origin.

But raising a grandchild is different. There is not much written about it. So, she decided to fill that gap by writing a picture book.

“I have scoured the internet for interactive toys and manipulatives, activities with grandchildren, and articles about grandparenting and Tagalog bilingual/books,” Suzara-Cheng shares.

She had many ideas before, but only one came into fruition when the grandson was born.

“As grandparents, we are the inconspicuous link for our children and grandchildren to the land of our birth. Thus, I have decided to build the bridge that will carry these ideas, propagating Tagalog as a Second Language by self-publishing Bilingual Tagalog Books, and starting with Alphabet Books and eventually moving to short stories from the homeland.”

When she wrote the book, Suzara-Cheng did not think it would win her an award.

“The company that I commissioned to print my book emailed me if I want to join a competition since there is a need for international books. I thought, why not? So here we go,” Suzara-Cheng explains.

‘My First Book of Animals’ (Ang Aking Unang Aklat ng mga Hayop) is a self-published book. Recently, more and more authors are resorting to self-publishing because they want to have control over their works.

“I want to have more control of the book writing, cover, design, sales and timeline,” Suzara-Cheng says.

However, getting published entails a lot of preparation.

Suzara-Cheng took a class at UCLA Extension on Writing and Publishing. Afterwards, she weighed her options – to submit her work to mainstream publishers which will take care of the printing cost and sales or to go self-published. She chose the latter.

My First Book of Animals by Jennifer Suzara Cheng. CONTRIBUTED

Like most immigrant authors who speak various languages, Suzara-Cheng believes that knowing and speaking one’s language is important to acknowledge heritage and the cultures of their homeland. Aside from Tagalog, she also speaks Bikol. She hails from Bicol Region.

“I have spoken to a lot of Fil-Am colleagues and students who wish that they can speak Tagalog. Language transcends belonging to the culture of families.  As an environmentalist, I experienced how in high school young people already have a mindset about the environment. So, why not start them young, a book that inspires love of animals and the tongue of their ancestors?” Suzara-Cheng says.

To sell her books and to promote environmentally friendly products from the Philippines, Suzara-Cheng set up an e-business called FilAm Eco Grandma. It will exclusively publish and sell bilingual Tagalog Books open to potential translation into other languages of smaller countries and dialects. She says that she plans to sell books published in the Philippines. These will be translated to English, Tagalog and Bikol.

My First Book of Animals and Suzara-Cheng’s website will be formally launched online on August 16, 2020. It is also the 16th year anniversary of her migration to the United States.

“It will cater to bilingual books with an open-ended goal of having books published in different languages and not only Tagalog. The goal is to provide children’s books that have language and cultural relevance to the ethnic origin of each child,” Suzara-Cheng says.

She is also working with potential suppliers of products with indigenous materials. She also mentions that the part of the profit will be donated to SULOG (Sumaro sa Salog Inc.) in honor of her mentor, Dr. Emelina G. Regis, of Naga City, Camarines Sur, Philippines.

My First Book of Animals costs $10 plus shipment. It is available in the US and Canada.