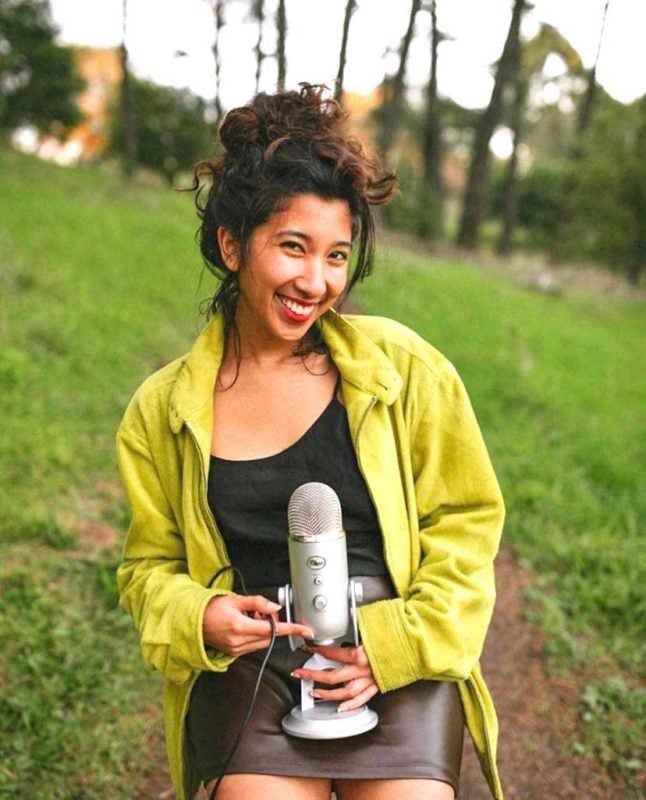 Kristy Drutman’s trip to North Cotabato in 2016 was a pivotal moment.

She remembered talking to kids who opened her eyes to the threat that mining, climate change and environmental destruction posed to indigenous communities in the region. They recounted stories of tribal leaders risking their lives to defend their land from mining and drilling.

“They realized at the end of the day, their destiny is to live and die for the land,” she said.

It was then that Drutman, an environmental activist, began realizing that she wanted her activism to be focused on representing stories like these.

“That was when I realized the work that needs to be done needed to be rooted in my identity and my connection to all this,” she said. “I realized I want to create a platform that lets people really understand the real connections to the crisis in a personal way.”

Two years later, in early 2018, she launched a media series called Brown Girl Green. Through her podcast, videos and blog, her goal is to elevate the voices of environmentalists of color creating change at the grassroots level. She also hopes the stories she tells will connect with people in a way that will inspire them to take action in the movement for climate and environmental justice.

Drutman, an assistant lecturer at UC Berkeley, said environmental justice wasn’t always on her radar. But it dawned on her in college how the environment she grew up in affected her health, she said. She lived in Corona, a city in Southern California, near a freeway. And she later realized that that proximity contributed to the low lung capacity she knew she had by the time she was in middle school.

Her interest in environmentalism sprouted in an AP environmental science class – everything she learned made her want to help people by cleaning their air and water – and bloomed when she got to UC Berkeley, where she majored in environmental policy.

At UC Berkeley, Drutman and her friends became involved in student environmentalism efforts, but grew frustrated because they rarely saw other students of color in what was a white-dominated environmental movement, she said. So, they founded the Students of Color Environmental Collective to be a healing space for students to express and discuss their grievances about their experiences navigating the movement. Many members were first generation immigrants or children of immigrants whose parents didn’t value participation in environmental justice the same way they did, she said. The collective went beyond its original goal in subsequent years to host community events, conferences, film screenings and panels.

It was also in college that Drutman developed a deeper connection to her Filipino identity when she traveled to Mindanao where she learned about the impact of mining on indigenous communities, she said.

Drutman grew up in a Filipino and Polish/Russian household where she said she connected to her identity primarily through food and family parties. Her perception of her mom’s home country growing up was influenced by the way her family described it: a dirty and dangerous place. It was only in college when she discovered and nurtured an interest in exploring her ethnic roots.

But even then, she said she found it difficult to relate to other Filipino Americans she encountered. The majority had families who hailed from Luzon, while hers came from Mindanao.

So when she had the opportunity to travel to the Philippines’ southernmost island in 2016 through an immersion program, she decided to go and found that it ended up being an empowering experience. She remembered finding joy in learning about plant-based cuisine from the region that she didn’t find in Filipino restaurants in the United States, and feeling a sense of belonging among the people she met during her time there.

“I started to like myself more because this felt like something no one can take away from me because it’s what’s embedded in me,” she said. “At the end of the day, even if I’m not an activist or if I don’t have Brown Girl Green anymore, I know I’ll always have my Filipino identity. That’s something I take a lot of pride in because I know I come from a lineage of resilient people who don’t give up and are very creative and really passionate.”

Drutman, who is also a board member of the Filipino American Coalition for Environmental Solidarity, an environmental justice non-profit in the San Francisco Bay Area, said she plans to travel to the Philippines once a year as part of the work she does. It’s a move that she said will allow her to build international solidarity, and work on collaborative campaigns and content with various groups.

A collaborative approach is one she has applied to content she has so far produced for Brown Girl Green, which features interviews with guests who talk about diversity and intersectional environmentalism. Some guests her platform has featured include environmental influencer Ariel Maldonado, and LaTricea D. Adams, the founder, CEO and president of environmental justice and civil rights group Black Millennials 4 Flint.

As she continues to contribute to the environmental movement, Drutman notes that racial and economic injustice need to be addressed before the world can focus on a sustainable future.

“We live in a system that is perpetuating racial and economic inequality that’s continuing to place people of color at the bottom of the ladder, especially black and brown folks,” she said. “When people are struggling day in and day out to deal with these systemic issues affecting their daily lives, they’re not going to be able to have the luxury to carve out time.”

“I realize that media has a really powerful role to play, and I want to be pushing it in a direction that’s putting out all the good stuff,” she said.