#Save Claudia Conway from being ‘canceled’ 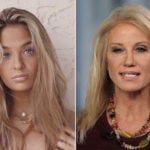 Filipinos the world over have suddenly become obsessed with  Claudia Conway, the quarter-Filipina scion of the politically self-blaspheming Conways.

You know them as Washingtn, DC’s most dysfunctional couple: Kellyanne, the very Catholic conservative who serves as senior adviser to the bozo liar-in-chief Trump. She’s married to George, the half-Filipino, Harvard educated, high powered conservative lawyer who heads the “anti-Trump” Lincoln Project.

Can this marriage survive? Not according to their very vocal 15-year-old Claudia. It’s “failed,” she said in a public Tweet to her dad.

In response, Papa George, after initially allowing the press to interview his daughter,  has now warned media folk to “desist.” But that’s not all.

Mom, who has lied for the president, was upset that a livestream went out of her attempting to take Claudia’s phone away in a form of punishment. Hmm. Now why wasn’t Kellyanne able to take Trump’s phone away?

Well, the Conways, after mostly being very liberal about social media,  have apparently had it with their left-wing/social justice warrior daughter. You’d think they would appreciate attention on Claudia as making them appear to be a somewhat more balanced and norma  family considering the predilections of Kellyanne (irrational Trumpy Catholic) and George (irrational generally, but saved by his non-Trumpy half-Filipinoness).

But alas, Claudia was last seen putting out the Tweet: “My parents are forcing me to delete social media so this is my last tweet. Apparently , I don’t have a platform! It’s fake love you all so much. Keep fighting. (heart symbol)”

These days  the so-called “cancel culture” has been a hot topic. Could Kellyanne and George be guilty of canceling their own daughter?

Wouldn’t that be the free speech version of “child abuse”?  Should “#SaveClaudiaConway” be a thing? For the answer see later in this column.

In the meantime, consider how easily Trump could deal with a similar  adversity, say like, let’s see… Coronavirus? If he could just cancel it all by  executive order.

But he can’t. He can, however,  make a mockery of justice by canceling a buddy’s prison reservation. The concierge-in-chief has fixed it for Roger Stone.

Roger Stone’s commutation? Is that like being sentenced to years of never-ending rush hour traffic through the Lincoln Tunnel? (Though truthfully, that might be the equivalent of 40 months in prison.) No, a commutation wipes out the time to be served. That’s better than an express lane. You’re done, with the snap of Trump’s fingers.

Stone’s felony convictions remain, which is good, because they are not insignificant: Lying to Congress, obstruction of justice, and witness tampering, mostly to obscure any connection between the Trump campaign and WikiLeaks. You try lying to Congress and see what kind of treatment you get.

Stone? He gets the president/real estate baron’s real “Get Out of Jail Free” card. And the optics of it all, especially through America’s new George Floyd lenses, make the Trump commutation of the Stone sentence especially outrageous.

Even in his first media responses about the commutation, Trump repeated his lies that the Mueller investigation on Russian interference in the 2016 election was a “witch hunt” and a “hoax.”

Mueller’s yield of 199 criminal charges, 37 indictments, and five prison sentences makes the Russia probe neither a “witch hunt” nor “hoax.” And to think the week had started out so promising with a Supreme Court ruling that Trump–on the issue of his taxes–was not above the law.

But by week’s end, there was Trump soaring above it all, saving another lying white male, while raising a figurative middle-finger to the rule of law. Trump was rewarding a buddy who saved him directly. It’s a lot different from commuting the sentence of a man unfairly convicted or is someone not entangled in your own affairs. That’s where the ugly head of corruption pushes up.

Meanwhile, there’s a message to people of color everywhere, but especially to those who are incarcerated. Think of the ones who are non-violent first offenders, like Stone would have been. Those folks remain behind bars. Stone walks. That’s not the way justice is supposed to work in America.

But it’s money in the bank when you’re white and have a powerful white friend who can make your problems go away. Besides, he owes you.

Last weekend, the president has started wearing a mask. It’s not out of shame, but it should be.

My dive into cancel culture

Unfortunately, for Claudia Conway, she’s a minor. So Kellyanne and George are simply displaying good parenting. Not being autocrats. Nor are they partaking in cancel culture activity.

Last Friday, I was on the David Feldman podcast and got hooked into the cancel culture debate.

As a professional provocateur and opinion writer myself, I know the importance of coining a phrase that becomes handy shorthand for a major dis. In a previous generation, if I demanded Asian American representation in society from the media to the board rooms, or spoke out on social justice truths about diversity or equality, I was often dismissed by the Right as being “politically correct.”

Asian American ideas? Thoughts? Those are some undervalued concepts.

These days, young social justice truthers have come up with a way to retaliate against cries of P.C. with C.C. (cancel culture). Now if they see someone do or say something that runs counter to their beliefs, they simply cancel them out. You know, like a newspaper. You remember those? Newsprint that had inked news stories and….

As the late great sports columnist Jimmy Cannon might have said, nobody asked me, but I would have signed. I believe in free speech as an absolute. More speech, not less. And when views are opposed, I believe in the necessity and responsibility to debate. Our polarized society assures opposition, but the incivility of our times most assuredly diminishes the likelihood of debate. That leaves us with parallel ideas that never clash, and resolve. And now we just end it all by dismissing people and their views with the push of a figurative cancel button.

As a journalist, I want to hear the other person’s view. But I have to admit there are some artists whose work I’m no longer interested in. I used to idolize Woody Allen when I was growing up. Now I care less about what he has to say about anything. But I’ll read all of Ronan Farrow.

Did I cancel Woody Allen? I guess. But is he going to be hurt by me canceling him? His new book will still find a publisher. Woody Allen won’t be silenced.

But as a small fry, I easily could. And that’s my problem with cancel culture. There’s that bullying factor. When digital mobs come trolling, that can lead to shutdown censorship.

Still, I think it comes down to choice. For example, I’m not interested in Woody Allen’s work or what he has to say. But I confess to still being interested in Louis C.K. My choice.

So I guess it’s like the abortion debate. One has the right to express themselves. And you have the right to not listen. You have your right to cancel someone or something you disagree with like an unwanted fetus. If you feel we don’t have to have their unwanted thoughts come to full term, evolve, spread and wreak havoc in society, then just cancel them.

Of course, without debate, you haven’t convinced or persuaded anyone of your own views. You’ve just avoided an attempt at making things better through debate and discussion. All you’ve done is shut down the volume of the other person and closed your eyes.

Am I suggesting a partial cancel culture? No, just that there’s got to be something better in a society that reveres both free speech and tolerance, than hailing the closed mind.

Emil Guillermo is a journalist and commentator. He writes a column for the Inquirer.net’s North American Bureau. Twitter @emilamok. Listen to his podcasts at www.amok.com