Anti-Terror Act is itself an act of terror 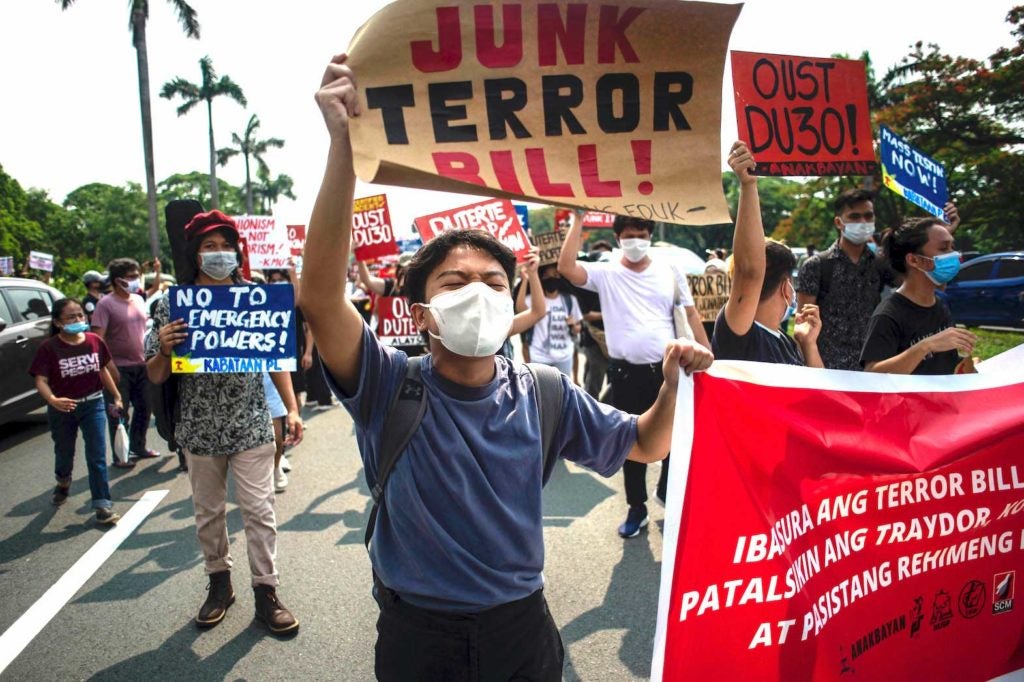 Protesters in Quezon City at a rally against the draft Anti-Terrorism Act, June 4, 2020. (Lisa Marie David/NurPhoto via AP)

NEW YORK—In the 2002 sci-fi film, Minority Report, set in 2054 and based on a Philip K. Dick novel, the government uses certain tools to foretell the commission of a crime by a person or group of persons even before that crime is committed. Thus, the government can prosecute and convict someone for a crime that hasn’t even been carried out.

This is essentially what the Anti-Terror Act (ATA) of 2020, passed by the Congress and signed into law July 3 by President Duterte, does: “prevent and stop” intended terrorist attacks by targeting individuals and/or groups deemed by the authorities most likely to perform such acts. The law confers on the executive branch of the government absolute power in defining terrorism, who are to be considered terrorists, and what to do with these alleged terrorists. It empowers an Anti-Terror Council (ATC)—a council that the executive branch will appoint—with judicial authority, subverting the courts, and able to indict citizens not on the commitment of terrorism but primarily on intent. Hence, any suspicion by state institutions such as the PNP (Philippine National Police) and the AFP (Armed Forces of the Philippines) is now a de jure basis for taking into custody those considered terrorists.

The bill also allows law enforcement and military personnel, duly authorized by the ATC, to carry out warrantless arrests without incurring liability under the Revised Penal Code. And the allowable period of detention has been extended from three to 14 days, extendable by 10 days, even without charges being filed—a provision that directly goes against the Philippine Constitution. Additionally, surveillance of individuals, the interception and recording of their communications—including, presumably, posts on social media—will be allowed for 60 days, simply on mere suspicion.

The Philippines Commission on Human Rights has said the bill’s overarching definition of terrorism “paves the [way] for possible abuse” by limiting “substantial freedoms, including expression of dissent, while [with] the vague and overly broad definition, authorities could wantonly tag [the] exercise of rights as terrorist expressions.”

“By this broad definition, starting a fight in a bar”—intended to cause serious bodily injury—“could technically be classified as an act of terrorism,” said Human Rights Watch, which considers ATA “a human rights disaster in the making.”

Holding a protest rally on a major thoroughfare such as Commonwealth Avenue against the Duterte regime that halts traffic could be construed as intending to cause interference with critical infrastructure. Its organizers could then be hauled off and detained for a possible 24 days.

Case in point: Recently, mask-wearing LGBTQ activists celebrating Pride Month marched in a peaceful and orderly manner down Mendiola Avenue, not far from Malacañang Palace, when the police forcibly dispersed them. The cops informed them that their protest action was illegal without citing what laws they had violated nor why 20 of them were being arrested. They were held for five days at the MPD detention center before being released. The crackdown was clearly meant to discourage mass rallies. And yet shortly after the march was broken up, the city displayed Pride flags on a major thoroughfare.

With regard to long-established armed groups hostile to the government, such as the Abu Sayyaf, ISIS, the New People’s Army, and various Muslim insurgent groups, etc., the ATA is redundant as there are already enough laws on the books aimed at these. “It’s not about going after terrorists,” according to human rights lawyer Jose Manuel Diokno, “but critics of this administration.”

This formidable constraint on constitutionally guaranteed freedoms comes on top of that long-standing practice of red-tagging, wherein individuals and organizations critical of Malacañang, are labeled “communist” or “terrorist” regardless of their actual beliefs or affiliations. This unconscionable tactic has long undermined Philippine democracy by stifling dissent and encouraging authoritarian practices. Particularly in the countryside, being red-tagged is often tantamount to a death sentence for a law-abiding activist.

Ironically, the passage of the act can itself be seen to violate its own provisions, for it clearly intends and sets out to damage and even destroy a democratic government, by openly contravening the Constitution, the very basis of a society bound by a fundamental respect for civil liberties, freedom of expression, and a separation of powers, particularly when it abrogates that of the judiciary in favor of the police and the military.

This law gives the PNP clear-cut authority and, more importantly, the obligation, to arrest all those who actively pushed for the bill, including legislators voting for it, those who drafted the legislation, and the president himself for signing the bill into law.

To be hoist by their own petard: what sweet, poetic justice!