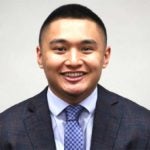 PETERSBURG, Florida— A Filipino American sports reporter said he was the target of an unprovoked racist diatribe by a white couple at the downtown St. Petersburg Publix on Wednesday, June 22.

Josh Tolentino, a second-generation Filipino American, reported via Twitter: “As I was exiting the store, I became the victim of racist attacks from a white couple. They both referred to me as ‘Kung Flu’ several times, told me to go back to China with the virus and mocked me for wearing a mask.”

Tolentino told Patch.com that as he walked out with his mask on, a white couple who didn’t have on a mask appeared upset because i they couldn’t get into Publix for not wearing a mask.

“They were upset that they couldn’t get in, and saw an Asian American coming out and started yelling at me.”

Pinellas County recently put into place an ordinance that requires every person to wear a mask when they enter a public business except for those who meet the exemptions stated in the ordinance.

Mayor Rick Kriseman, responding to Tolentino’s tweet, stated, “This is not the St. Pete we’ve built. This is not who we are. I really hope this couple is simply visiting our city and I hope they never come back.

“This is called Trickle Down Trump,” the mayor continued. “It won’t be tolerated. I am really sorry you experienced this and thank you for sharing it.”