Work discrimination against LGBT is illegal – US Supreme Court 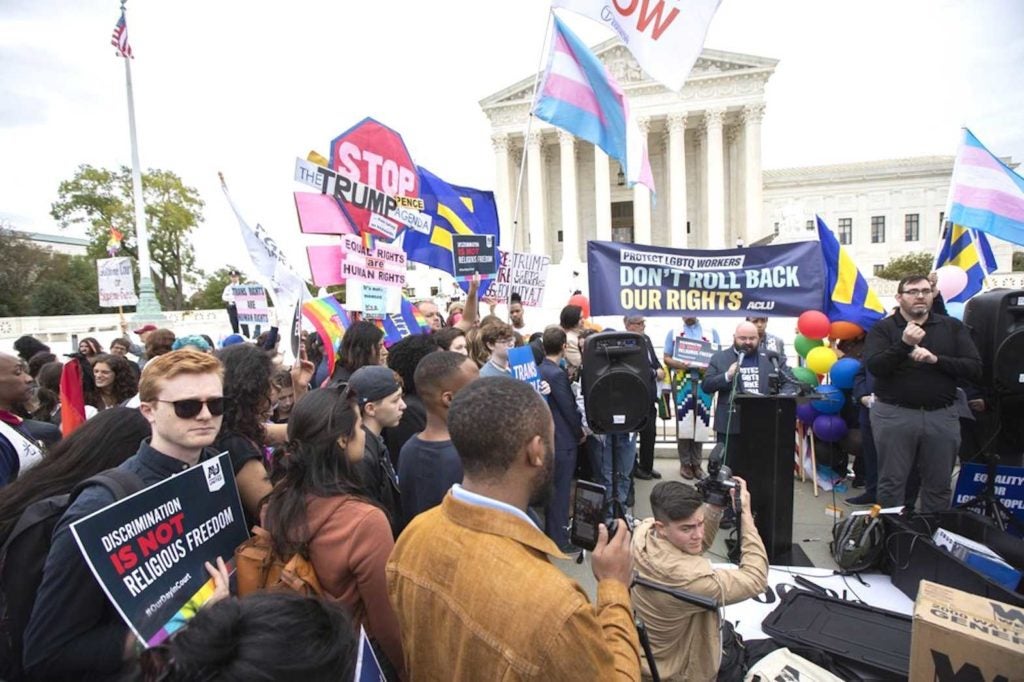 Gerald Bostock worked as a child welfare advocate for Clayton County, Georgia. As an official of the juvenile court and under his leadership, the county won national awards for its work. After a decade with the county, Mr. Bostock began participating in a gay recreational softball league. Soon after, influential members of the community allegedly made disparaging comments about Mr. Bostock’s sexual orientation and participation in the league. He was eventually fired for “conduct unbecoming a county employee.”

Donald Zarda worked as a skydiving instructor at Altitude Express in New York. After several seasons with the company, Mr. Zarda mentioned that he was gay. Days later, he was fired.

Aimee Stephens worked at R. G. & G. R. Harris Funeral Homes in Garden City, Michigan. When she was hired, Ms. Stephens presented as a male. But two years into her employment, she began treatment for despair and loneliness. Clinicians diagnosed her with gender dysphoria and recommended that she begin living as a woman. In her sixth year with the company, Ms. Stephens wrote a letter to her employer explaining that she planned to “live and work full-time as a woman” after she returned from an upcoming vacation. The funeral home fired her before she left, telling her “this is not going to work out.”

Each employee sued their respective employer, alleging unlawful discrimination on the basis of sex. In Mr. Bostock’s case, the Eleventh Circuit held that the law does not prohibit employers from firing employees for being gay and so his case could be dismissed. Meanwhile, in Mr. Zarda’s case, the Second Circuit concluded that sexual orientation discrimination violates Title VII and allowed his case to proceed. In Ms. Stephens’s case, the Sixth Circuit held that Title VII bars employers from firing employees because of their transgender status.

All three cases reached the U.S. Supreme Court, which now has to answer this question: Can an employer fire someone simply for being homosexual or transgender?

The high court answers: No. Title VII of the Civil Rights Act of 1964 prohibits discrimination in the workplace on the basis of race, color, religion, sex, or national origin. “An employer who fires an individual for being homosexual or transgender fires that person for traits or actions it would not have questioned in members of a different sex. Sex plays a necessary and undisguisable role in the decision, exactly what Title VII forbids.”

The high court began its analysis by noting that the ordinary public meaning of the statute’s language when the law was adopted is plain and straightforward: “An employer violates Title VII when it intentionally fires an individual employee based in part on sex. . . If the employer intentionally relies in part on an individual employee’s sex when deciding to discharge the employee—put differently, if changing the employee’s sex would have yielded a different choice by the employer—a statutory violation has occurred.”

The high court pointed out that “it is impossible to discriminate against a person for being homosexual or transgender without discriminating against that individual based on sex.” The court then goes on to explain via an example: An employer has two employees, both of whom are attracted to men. Both employees are similar in all respects, except that one is male and the other female. If the employer fires the male employee because he is attracted to men, the employer discriminates against him for traits or actions that it tolerates in the female employee. Which means the male employee was singled out for firing because he was a man. If he was a woman attracted to men, he would not have been fired. This is discrimination on the basis of sex.

Issued by the highest court, this decision which applies the Civil Rights Act of 1964, a federal statute, impacts employment conditions throughout the country. Prior to this ruling, California already prohibits discrimination on the basis of gender expression and sexual orientation.