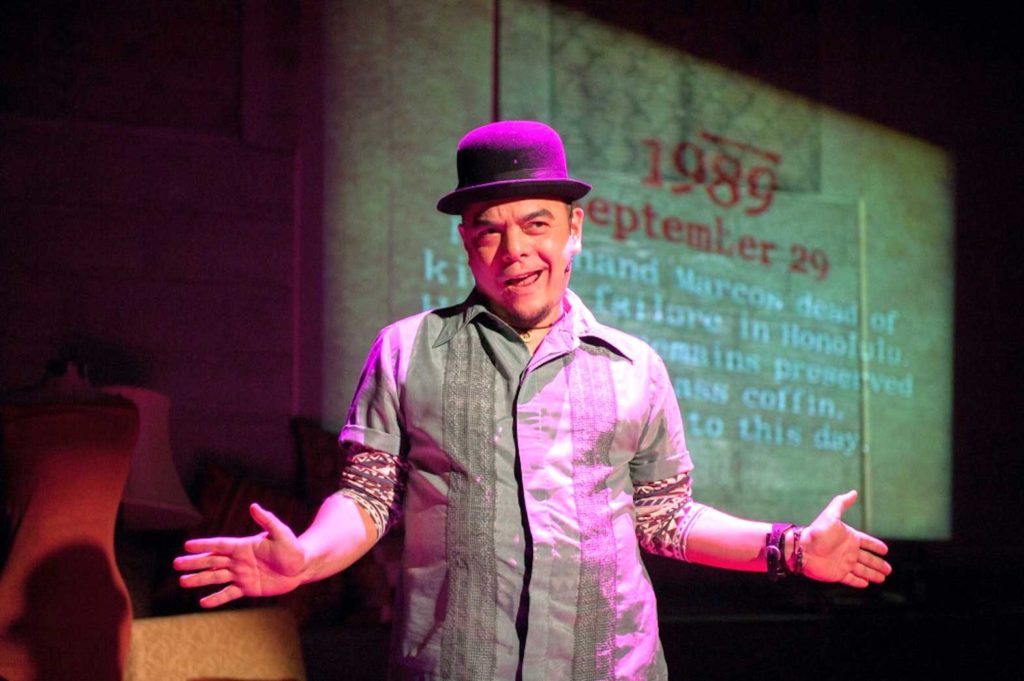 Written by Celdran himself, he acts as a tour guide who discusses “the inimitable life of one the world’s most extravagant personalities, Imelda Marcos, the wildly controversial former First Lady of the Philippines.”

He had previously staged the show in Manila and Toronto before he performed it for Ma-Yi in 2014. The show actually began as a walking tour in the early 2000s that Celdran conducted in Manila.

In a statement, Ma-Yi describes Celdran as “one of the Philippines’ best-known storytellers and provocateurs. He uses his endless charm and biting humor to give audiences an insider perspective into Manila’s elite.”

This free stream is part of the company’s efforts to stay connected with audiences despite the Covid-19 pandemic.

It recently streamed “The Romance of Magno Rubio,” a play based on a short story by Fil-Am writer Carlos Bulosan. The play was streamed for a week and received a total of 95,400 views.

The Ma-Yi staging of “Livin’ La Vida Imelda” was helmed by its artistic director Ralph Peña, who is one of the company’s cofounders and whose credits include plays by Fil-Ams such as Jessica Hagedorn and Fabian Obispo’s musical “Felix Starro” (an adaptation of Fil-Am Lysley Tenorio’s short story) and A. Rey Pamatmat’s “House/Rules.” Other credits include “The Chinese Lady” and “Wong Kids in The Secret of the Space Chupacabra, Go!” among others.

Other Filipino Americans involved in the show included Fabian Obispo for sound design and Cristina Sison for stage management. Suzette Porte and Jorge Ortoll were the producers.

A Manila native, Celdran stayed in the US briefly to study at the Rhode Island School of Design. He then worked in performance art, directing, set design, as well as operating an art gallery.

However, he was better known for conducting cultural and historical walking tours of Manila spots such as Intramuros and the Cultural Center of the Philippines.

“He wore them interchangeably, often blurring their distinctions; as when he used performance art to advocate for Reproductive Rights inside Manila Cathedral in 2003. That act landed him in jail, charged with an archaic law for ‘offending religious feelings.’

“By August 2018, his case made it to the Philippine Supreme Court, which upheld the conviction. On February of 2019, rather than face the grim and very dangerous prospect of a year in Manila’s notorious prisons, he flew to Spain.

While in Madrid, he started the Jose Rizal Walking Tour of Madrid, which took tourists to places where Filipino writer and revolutionary hero Jose Rizal had frequented during his study in the Spanish capital, and provided insights on how Rizal’s experience is linked to the Philippine Revolution.

“He died on October 8, 2019, in exile. Carlos’s friends and family are still grieving this tremendous loss. We hope this recorded performance of his one-person play ‘Livin’ La Vida Imelda’ serves as a reminder of his blazing talents.”