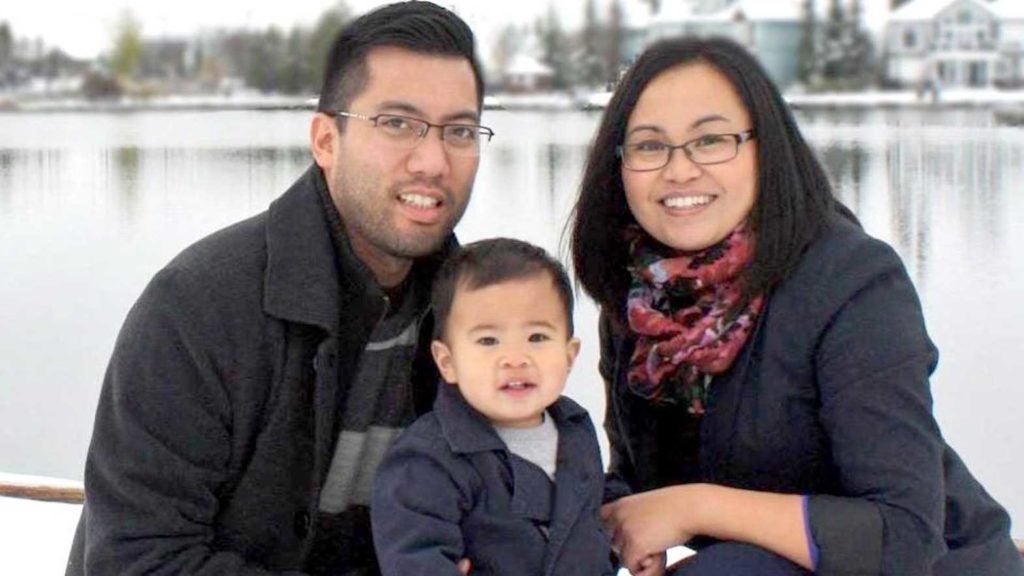 Alexander Bello,Ph.D. is part of the team that works on the study that found Covid-19 infectious for the first eight days. He is seen here with wife, Levilyn, and son, Logan. FACEBOOK

WINNIPEG, Manitoba — “I never thought I’d actually experience a pandemic quite like this. My whole career has been spent combating comparatively smaller epidemics like Zika and Ebola, but never have I imagined to see the day that the whole world would go into a lockdown,” says Alexander Bello, Ph.D, a microbiologist at the National Microbiology Laboratory in Winnipeg.

Bello is part of a team of researchers that has been hunkered down at the microbiology lab since the outbreak of the coronavirus in March.

Their study is also part of  a worldwide effort that is racing to contain if not stop, the spread of the deadly virus.

Last week, the team released a study that found that Covid-19 appears to be infectious only for the first eight days after patients experience symptoms.

In the largest study of its kind so far, researchers from the National Microbiology Laboratory, Cadham Provincial Laboratory and the University of Manitoba looked at nasal or throat samples from 90 Manitobans who tested positive for Covid-19 from March 12 to the first week of April.

If confirmed by further work, the findings could have implications for the way the disease is treated, isolated and prevented.

Working behind the scenes, these scientists are the “unsung heroes” in the fight against the coronavirus. For while they are not on the ‘front lines’ like doctors and nurses in hospitals, their work is just as important.

And they are taking enormous risks -exposing themselves to the very disease that they want to control. For hours and days on end, they peer into microscopes, take samples from lab animals and actually look at human cells and viruses in their sleuthing.

So dangerous is the work that the Winnipeg lab is the only one in Canada that has Level 4, the high containment space needed to work on the world’s most dangerous pathogens.

They’re scientists –  doctors, epidemiologists, Ph. D’s and other medical professionals who team up in their laboratories looking for that elusive solution, sharing their findings with others in Canada and throughout the world engaged in the same search.

One of them is Bello, a young Filipino-Canadian microbiologist at Winnipeg’s Public Health Agency of Canada, the leading research facility in the country for infectious diseases.

The lab is well-known for identifying the Ebola virus that was ravaging West Africa in 2016. The vaccine that they developed helped put a stop to the spread of the deadly virus in the African country and its neighbors.

Bello was then finishing his doctorate at the University of Manitoba and worked in the virology lab under Gary Kobinger. Their research put the small Winnipeg laboratory on the world map making it a virtual powerhouse for Ebola research.

Born and raised in Winnipeg, Manitoba, the 39-year Bello is the son of Alfred Bello, Sr. of Masbate and Myrna Arquillano of San Francisco, Camotes in Cebu. He has two brothers and four sisters.

Married to Levilyn Galvez, they have a four-year old son Logan.

Bello went to the Jesuit-run St. Paul’s High School and completed his doctorate in Medical Microbiology from the University of Manitoba in Winnipeg in 2014. He took further studies in Clinical Microbiology with a Fellowship at the University of Alberta in Edmonton as well as a Post Doctoral Fellowship at the Public Health Agency of Canada in Winnipeg, Manitoba.

Bello said the time he spent in his father’s province of Masbate somewhat prepared him during his stint in Sierra Leone and Guinea.

“I spent almost a year in the Philippines in my dad’s province where there was no running water and limited electricity, so this prepared me somewhat during my time in Sierra Leone and Guinea because conditions were similar. Having seen hardships firsthand such as famine, poverty, and a country with the highest maternal mortality has given me a better appreciation of the healthcare system and opportunities that we have access to in Canada,” he told Philippine Canadian news.Com in an email.

During the 2013–2016 Ebola outbreak in West Africa Bello was deployed twice to Sierra Leone as a Team leader to help aid Médecins Sans Frontières (MSF) or Doctors Without Borders and its partners. He helped in diagnostics for suspect and confirmed Ebola virus patients, as well as demobilization of the on-site laboratory.

He then travelled to Guinea as a consultant for the World Health Organization (WHO) where he installed a diagnostic laboratory and provided technical support for Ebola diagnostics. His work in Guinea included assembling the lab and performing diagnostics on samples from corpses, live patients and known Ebola contacts for the detection of Ebola virus.

Bello has authored or co-authored 45 publications published in medical journals with 2,439 citations according to Research Gate.