Floyd death pushes US military to face ‘own demons’ on race 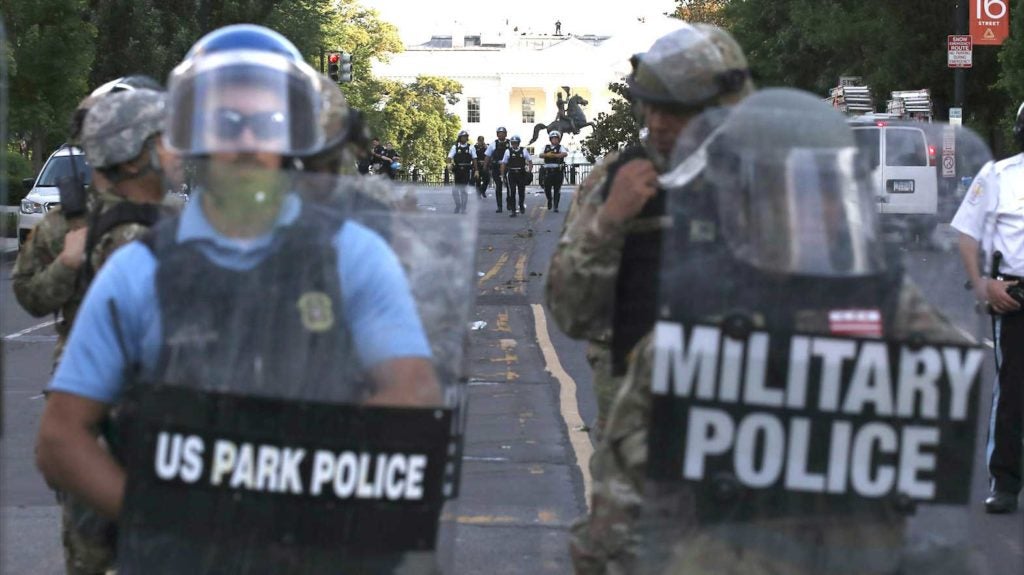 Authorities clear Lafayette Park in Washington, D.C., on Monday, while across the street at the White House, President Trump said he would send the military to U.S. cities if local officials don’t end unrest. (Alex Brandon/AP)

WASHINGTON — The death of George Floyd in police hands has pushed the U.S. military to search its soul and to admit that, like the rest of America, it has fallen short on racial fairness.

Although the military historically has prided itself on diversity, leaders acknowledge that black troops often are disproportionately subject to military legal punishment and are impeded in promotions.

“I struggle with the Air Force’s own demons that include the racial disparities in military justice and discipline among our youngest black male airmen,” Chief Master Sergeant of the Air Force Kaleth O. Wright, an African American and the service’s top enlisted airman, wrote in a social media post this week.

While tensions simmer between the Pentagon and the White House over the proper limits of military involvement in policing protests prompted by the May 25 killing of Floyd in Minneapolis, what goes largely unspoken is that many of the troops being called upon to help keep order are African Americans and other minorities.

Defense Secretary Mark Esper said little about the Floyd killing until Wednesday, when he called a news conference and declared the death a police murder. “It is a tragedy that we have seen repeat itself too many times,” he said.

Esper, a West Point graduate who served 10 years on active duty in the Army, called the military a leader on the racial front. But he acknowledged it has “much to do” to improve diversity and stop discrimination.

Wright, the chief master sergeant, said his greatest fear is waking up one morning to learn that a black airman has “died at the hands of a white police officer.”

On a less drastic, more subtle level, many African Americans who have served say they feel angst.

“I’m black, and when I walk up to somebody and say Hi, unless I have my veteran’s sticker on my car or I’m on base, people look at me with a frown or walk away. Tensions are high,” said Elvin Carey, a 35-year-old Iraq War veteran who is a civilian employee at Marine Corps Air Station Miramar in a San Diego suburb.

Wright was the first senior military leader to speak out after Floyd’s death. He was followed by an outpouring of anger and anxiety — some directed at the services’ own racial failings — from senior leaders throughout the military. Few concrete proposals for improvement have been offered, though, reflecting the difficulty of rapid change in such a large and tradition-bound institution.

“Though we all aspire to live by the Army values of loyalty, duty, respect, selfless service, honor, integrity, and personal courage, the Army has sometimes fallen short,” Army Secretary Ryan McCarthy and the Army chief of staff, Gen. James McConville, wrote in a message to the force Wednesday. “Because just as we reflect the best of America, we reflect its imperfections as well.”

The military, with African Americans making up a little over 17% of its active duty ranks, is more racially diverse than the country, which is 13% African American, according to 2019 Census estimates. The Army is the most diverse with more than 21% African Americans, while the Marine Corp is the least, with 10%. Blacks make up about 17% of the Navy and less than 15% of the Air Force.

But there is a much greater racial divide within the active duty military based on rank.

Fully 19% of active duty enlisted troops are black, but they make up only 9% of the officer corps. Of those, there are just 71 who are general or flag officers, wearing one to four stars, including only two who have attained the top four-star rank.

Colin Powell, an Army four-star general, was White House national security adviser and then chairman of the Joint Chiefs of Staff before President George W. Bush named him secretary of state.

However, none of the military services has ever been led by a black officer, although that is expected to change soon. Gen. Charles Q. Brown Jr., has been nominated to lead the Air Force, succeeding Gen. David Goldfein.

Brown, currently the commander of U.S. Pacific Air Forces, posted on social media Friday a video message describing a lifetime of dealing with racial bias and the struggle to fit in to a predominantly white society.

In a tangible sign of openness to forcing change on the racial front, Goldfein declared in an internal message June 2, “We must look inward at our Air Force.” The service’s inspector general, he said, will review the Air Force’s legal system as well as “racial injustice and opportunities for advancement.”

Gen. Mark Milley, chairman of the Joint Chiefs of Staff, joined the chorus of voices with a message to the force that addressed more broadly the need for troops to stay true to the Constitution.

“We all committed our lives to the idea that is America,” he added in a hand-written note beside his signature. “We will stay true to that oath and the American people.”

The military has not ignored the race issue entirely. In April, the top Marine, Gen. David Berger, took on the issue of racial tensions within the Corps by banning the display of the Confederate flag and other such symbols.