Only half of Americans would get a Covid vaccine–poll 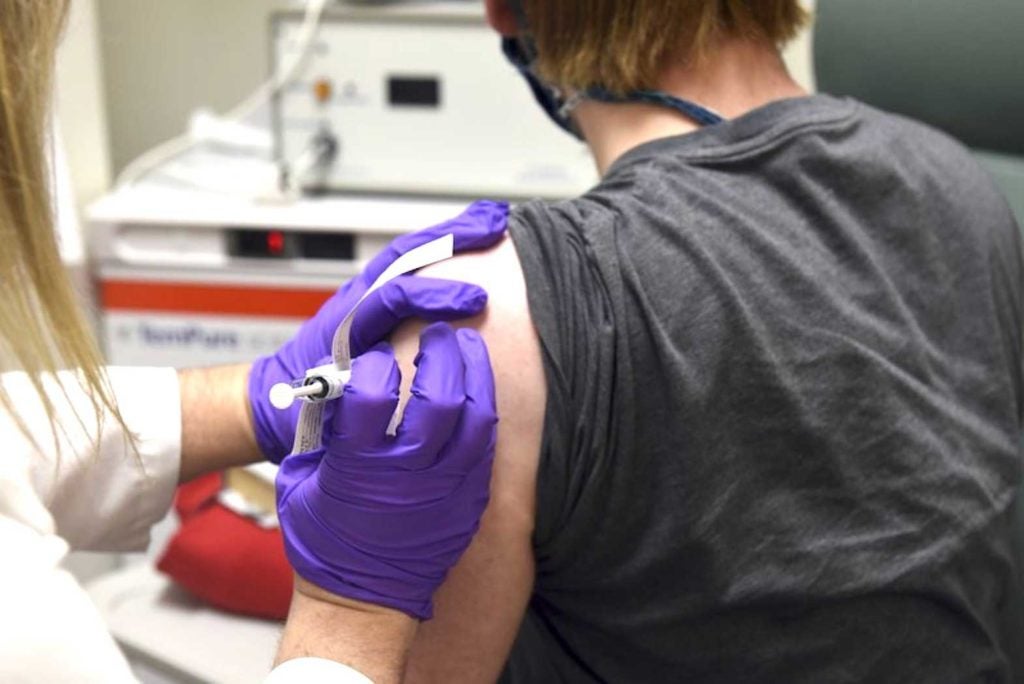 Only about half of Americans say they would get a COVID-19 vaccine if the scientists working furiously to create one succeed, according to a new poll from The Associated Press-NORC Center for Public Affairs Research.

That’s surprisingly low considering the effort going into the global race for a vaccine against the coronavirus that has sparked a pandemic since first emerging from China late last year. But more people might eventually roll up their sleeves: The poll, released Wednesday, found 31% simply weren’t sure if they’d get vaccinated. Another 1 in 5 said they’d refuse.

Health experts already worry about the whiplash if vaccine promises like President Donald Trump’s goal of a 300 million-dose stockpile by January fail. Only time and science will tell — and the new poll shows the public is indeed skeptical.

“The unexpected looms large and that’s why I think for any of these vaccines, we’re going to need a large safety database to provide the reassurance,” he added.

Among Americans who say they wouldn’t get vaccinated, 7 in 10 worry about safety.

“I am not an anti-vaxxer,” said Melanie Dries, 56, of Colorado Springs, Colorado. But, “to get a COVID-19 vaccine within a year or two … causes me to fear that it won’t be widely tested as to side effects.”

Dr. Francis Collins, who directs the National Institutes of Health, insists safety is the top priority. The NIH is creating a master plan for testing the leading COVID-19 vaccine candidates in tens of thousands of people, to prove if they really work and also if they’re safe.

“I would not want people to think that we’re cutting corners because that would be a big mistake. I think this is an effort to try to achieve efficiencies, but not to sacrifice rigor,” Collins told the AP earlier this month.

“Definitely the worst thing that could happen is if we rush through a vaccine that turns out to have significant side effects,” Collins added.

Among those who want a vaccine, the AP-NORC poll found protecting themselves, their family and the community are the top reasons.

“I’m definitely going to get it,” said Brandon Grimes, 35, of Austin, Texas. “As a father who takes care of his family, I think … it’s important for me to get vaccinated as soon as it’s available to better protect my family.”

And about 7 in 10 of those who would get vaccinated say life won’t go back to normal without a vaccine. A site foreman for his family’s construction business, Grimes travels from house to house interacting with different crews, and said some of his coworkers also are looking forward to vaccination to minimize on-the-job risk.

The new coronavirus is most dangerous to older adults and people of any age who have chronic health problems such as diabetes or heart disease. The poll found 67% of people 60 and older say they’d get vaccinated, compared with 40% who are younger.

And death counts suggest black and Hispanic Americans are more vulnerable to COVID-19, because of unequal access to health care and other factors. Yet the poll found just 25% of African Americans and 37% of Hispanics would get a vaccine compared to 56% of whites. 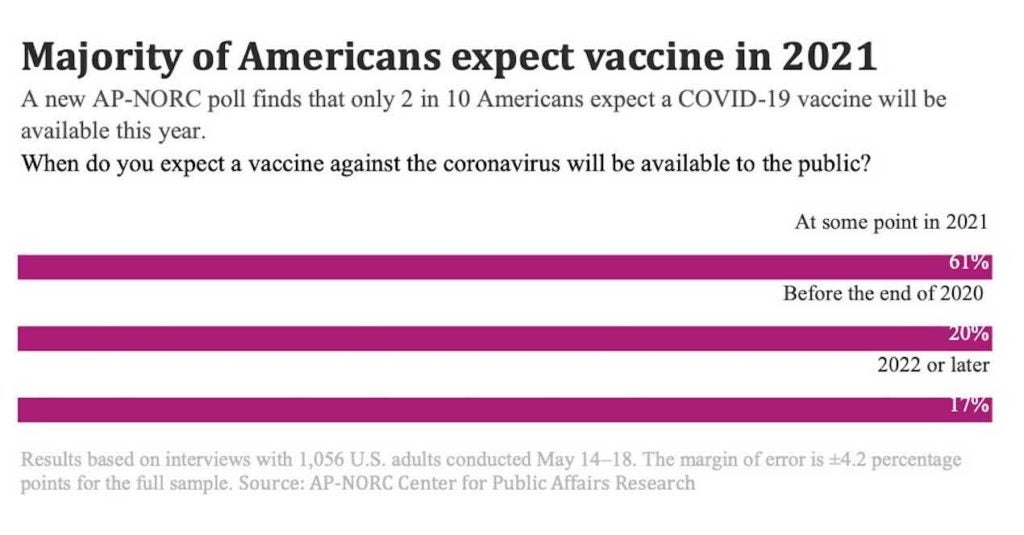 Among people who don’t want a vaccine, about 4 in 10 say they’re concerned about catching COVID-19 from the shot. But most of the leading vaccine candidates don’t contain the coronavirus itself, meaning they can’t cause infection.

And 3 in 10 who don’t want a vaccine don’t fear getting seriously ill from the coronavirus.

Over 5.5 million people worldwide have been confirmed infected by the virus, and more than 340,000 deaths have been recorded, including nearly 100,000 in the U.S., according to a tally kept by Johns Hopkins University. Experts believe the true toll is significantly higher.

And while most people who get COVID-19 have mild cases and recover, doctors still are discovering the coronavirus attacks in far sneakier ways than just causing pneumonia — from blood clots to heart and kidney damage to the latest scare, a life-threatening inflammatory reaction in children.

Whatever the final statistics show about how often it kills, health specialists agree the new coronavirus appears deadlier than the typical flu. Yet the survey suggests a vaccine would be no more popular than the yearly flu shot.

Worldwide, about a dozen COVID-19 vaccine candidates are in early stages of testing or poised to begin. British researchers are opening one of the biggest studies so far, to test an Oxford University-created shot in 10,000 people.

For all the promises of the Trump administration’s “ Operation Warp Speed,” only 20% of Americans expect any vaccine to be available to the public by year’s end, the poll found. Most think sometime next year is more likely.

Political divisions seen over how the country reopens the economy are reflected in desire for a vaccine, too. More than half of Democrats call a vaccine necessary for reopening, compared to about a third of Republicans. While 62% of Democrats would get the vaccine, only 43% of Republicans say the same.

“There’s still a large amount of uncertainty around taking the vaccine,” said Caitlin Oppenheimer, who leads NORC’s public health research. “There is a lot of opportunity to communicate with Americans about the value and the safety of a vaccine.”

The AP-NORC poll of 1,056 adults was conducted May 14-18 using a sample drawn from NORC’s probability-based AmeriSpeak Panel, which is designed to be representative of the U.S. population. The margin of sampling error for all respondents is plus or minus 4.2 percentage points.