What happened to the China of the Third World? 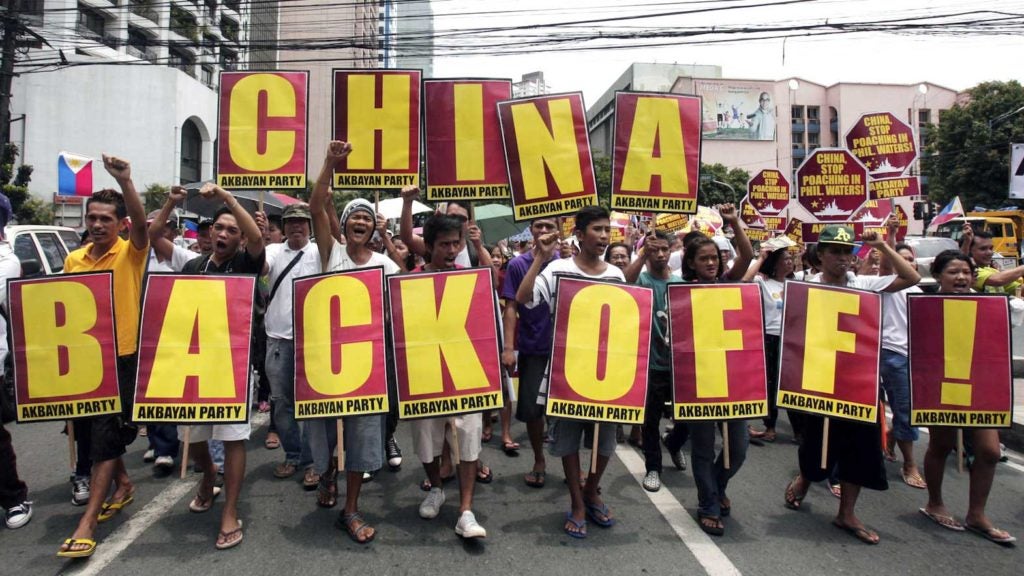 Protesters in the Philippines marching in Manila against China’s sea incursions. PAT ROQUE/AP

Before it became associated with “third class” or “third rate,” “Third World” signified independence, even defiance. It referred to nations that were once bullied, robbed and oppressed by the powerful nations of the world.

It referred to former colonies of European powers, including the Philippines, the brown and black peoples of Africa, Asia and Latin America, caught in the Cold War struggle between the US and Western Europe and the Soviet bloc.

One nation played an important role in this movement: China.

Like the Philippines and other Third World nations, China had endured decades of colonial and imperialist bullying. But at the height of the Cold War, together with India, it tried to forge an alliance of mostly small, struggling, non-white countries emerging from the colonial era.

China, under the leadership of the Chinese Communist Party, has long been known as an authoritarian regime. But during the Cold War, it was also seen as an ally of smaller, weaker countries, the peoples who were once abused and raped by the powerful, mostly white nations.

But then things changed. China, under the leadership of the Communist Party, grew rich and powerful.

In a 2010 Asean meeting in Hanoi, a Communist Party official, ​Chinese Foreign Minister Yang Jiechi,​ simply couldn’t help displaying that arrogance to the world. Annoyed by criticisms of China’s aggressive posture in Southeast Asia, he bluntly told his Vietnamese hosts: “China is a big country and other countries are small countries, and that’s just a fact.”

That message has become even more pronounced today, more brazen, as Beijing has pretty much declared: “Screw Third World solidarity! Screw the Third World! Remember how the Europeans and the Americans screwed the poor nations of the world? Well, it’s now our turn to do it!”

One thing needs to be stressed here: the Chinese foreign minister’s stunning declaration in Hanoi was made not by an ordinary Chinese, but a top official of the Chinese government, a member of the Chinese Communist Party leadership, which clearly, disturbingly has become even more aggressive in the last few months.

Beijing’s rulers are flaunting their power at a time when people of Chinese and Asian descent are under fire, the targets of racist attacks in America, Australia and even the Philippines, where ordinary people of Chinese ancestry or who look Chinese have been blamed for the way the CCP leadership tried to deceive the world about the coronavirus crisis and is now trying to take advantage of the global debacle.

This became even more evident when the CCP last week imposed a ​new security law​ on Hong Kong and amid a more threatening posture toward Taiwan, the independent, progressive nation Beijing keeps insisting is its property. The CCP leadership has also been flaunting its power in the Philippines where it’s been fortunate enough to have an obedient, subservient ally in Duterte.

Raphael Lotilla, the scholar of international law and former cabinet secretary, described to me the stunning transformation of a country that was considered an ally a country like the Philippines could depend on.

“The message was always that it was in solidarity with other developing countries,” Lotilla, a longtime friend of mine, told me recently.

China’s rise was supposed to be a welcome development for Third World countries who were prepared to accept the “notion of China occupying its rightful place in the international order as a responsible power,” Lotilla told me.

What many developing countries did not expect and do not accept, he said, is a China “behaving like another U.S.” that is, like the superpower known to wield its power like an imperialist bully in the region — as Beijing is now doing.

“We hold them to standards that they themselves had talked about,” Lotilla told me. “We had high expectations of China.”

And they were clearly too high.

The one-time champion of the Third World has, under the CCP’s leadership, followed the lead of the colonialists and imperialists that saw countries like the Philippines as “third rate” and “third class” countries that it could simply push around.