For Whom Covid-19 Tolls 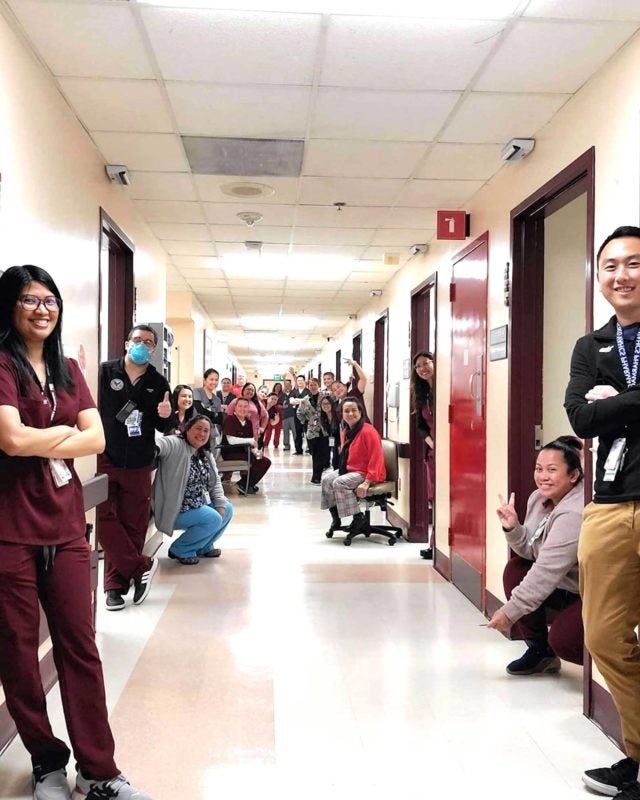 NEW YORK—Filipino health-care workers are at a dangerous disadvantage in these perilous times. More accurately, at a double disadvantage. On one hand, they are seen through the lens of all-Asians-look-alike, their presence perceived as a malignancy by some of the more unenlightened members of the public, emboldened by virulent rhetoric to acts of violence.

On the other hand, being on the front lines against a deadlier but unseen foe, often without the requisite personal protective equipment, they have been among those hardest hit by COVID-19.

A friend reposted his physician niece’s March 15th FaceBook account of her harrowing experience as she took the New York subway en route to the Kings County Hospital, where she worked at the COVID-19 inpatient ward:

“As the doors opened on 34th St., I felt a swipe on the head and I looked and there was this disheveled middle-aged white man who was bleeding from a split lip as he sat directly across from me.  He was mumbling unintelligibly at me and passengers started moving to the other end of the subway car. He starts yelling louder and lunges at me but I escaped to the opposite end of the car screaming at the others in the next car to call for help. Finally, a complete stranger, a black belt Kuk Sool Won, boxing, kickboxing and UFC coach intervened! He pulled out of his bag what looked like a Kali fighting stick. As we rolled into 14th St., the fight spills out into the platform. I rushed to a police station and got 8 officers to help. After filing a report, I got my hero’s contact info and went to work on autopilot.”

In yet another encounter, a Filipino  nurse on the subway, also on his way to work, was accosted by a white male, who, according to NBC News, yelled, “Hey Chinaman, you’re infected. You need to move to a different car. I’m going to beat this Chinese n—— up.” He then grabbed the 30-year-old male nurse but failed to remove him from the car. Uninjured the nurse refused medical attention. Evidently the thug failed to realize that, if he truly believed the nurse were infected, he increased his risk of infection exponentially by manhandling him. Not surprising, of course, at what can only be described as moronic behavior among those who look on science as phony and take seriously Trump’s morally reprehensible suggestion that imbibing disinfectant is a sure cure for the virus.

These incidents dramatize the resurgence of anti-Asian prejudice, as Asian Americans have become convenient scapegoats for the spread of the coronavirus. For April, the STOP AAPI HATE reporting center tallied about 1,500 cases of coronavirus-fueled discrimination, with Asian Americans subject to both verbal and physical violence in public spaces. Just recently, Senate Democrats urged the federal government to respond, citing racially charged rhetoric by such prominent figures as President Trump and other high-ranking Republicans, who have labeled the virus the “Wuhan virus” and the “China virus.” The World Health Organization has, since 2015, cautioned against the use of such terms to categorize disease outbreaks.

Far deadlier of course is the virus itself, an equal-opportunity killer. No segment of society is untouchable, as the recent infections at the White House demonstrate. At extreme risk are the healthcare professionals and their support staff. Often without all the necessary PPE (Personal Protective Equipment), each day on the job is a game of Russian roulette, but with more than one bullet in the cylinder. And the Filipino-American community, with its preponderance of doctors, nurses, therapists, and caregivers, nevertheless takes on the challenge, though surely with massive trepidation.

One of the more publicized fatalities was that of a 61-year-old Filipina nurse, Celia Lardizabal Marcos, working at the Hollywood Presbyterian Medical Center in Los Angeles. COVID-19 claimed her on April 17, two weeks after she attempted to resuscitate a man who had already been diagnosed with the disease.

According to Nurses Union SEIU 121 President Nina Wells, “Celia was called to a COVID-19 isolation room while wearing only a surgical mask—not the required N95 respirator, gown, face shield, and booties that her hospital should have given her for her protection. Now we know she gave her life to try to save a life.”

The union has filed a complaint with the state Occupational Safety and Health Administration, charging that Marcos’ death was “the result of inadequate PPE provided to staff.”

A 2018 survey by the Philippine Nurses Association of America revealed that a significant percentage of respondents were in bedside and critical care. Impossible to maintain social distancing in these circumstances, and thus the imperative for each one to be given complete PPE.

In the New York-New Jersey metropolitan area, 25 percent of Filipinos are employed in the health-care industry. And the death toll in their ranks has increased due to the virus. Having been recruited at different times in US history, these immigrants enabled other family members  to come over as well. And many in the succeeding generations have become health-care workers themselves.

Today, according to census data, Filipino-Americans comprise about 1% of the U.S. population but more than 7% of the hospital and health-care workforce— nearly 500,000 professionals. As has been pointed out, they have to fight not just a potentially lethal illness, but racist scapegoating, underlying which is the unspoken belief that the lives of people of color are expendable.

Since the Filipino diaspora is a mainstay of the Philippine economy—last year, $35 billion was remitted to the Philippines, globally the fourth-largest recipient of overseas remittances—these brave professionals override their fear of losing their jobs and pull that trigger time and time again.