Politics forces US to abandon effective fight vs. virus 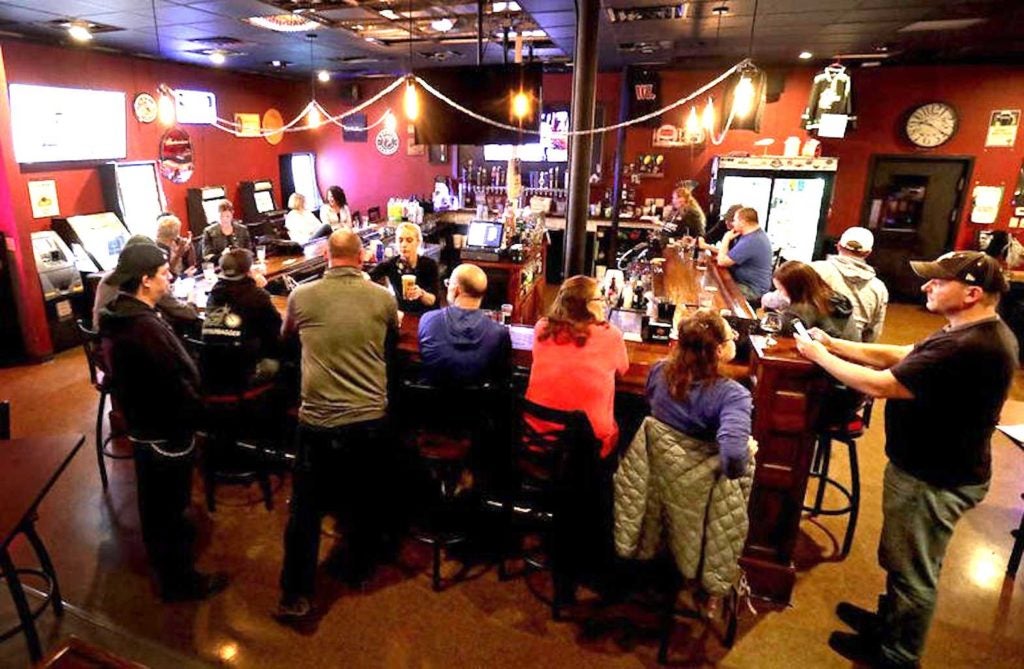 Wisconsin, known for cheese with or without holes, has found some left-over holes in its state Constitution. And now people are flocking to bars and restaurants while they can.

Or maybe while they’re still alive. It’s all at your own risk.  The virus is still out there. But maybe you’re all too bored and too selfish to keep fighting the virus effectively?

Here’s where virus politics is in America. Wisconsin is opening up. Too soon? Not soon enough, says the state’s conservative Supreme Court which by a 4-3 vote decided the state’s Democratic governor has no right to extend the stay at home orders to fight the virus.

Is it for the public good?

The people dying to get to a bar or restaurant clearly don’t care. But what about the workers who have to deal up close with customers who may be asymptomatic?

And what about Dr. Anthony Fauci, the director of the National Institute of Allergy and Infectious Diseases, who at this point is the most trusted man in America on the virus?

Said Fauci this week, “If certain areas prematurely open up, my concern is we might see spikes that turn into outbreaks.”

Already, countries that have opened up too soon, are closing up again. Germany. South Korea.

The fate of Wisconsin and some of the other states that are on their own trying to stagger their way back to normal? Unclear.

“The consequences could be serious,” Fauci said to that spread out Senate panel this week. “Even in states that reopen with a deliberate pace…there is no doubt that when you pull back on mitigation, you will see some cases reappear.”

And the president? He has given up on the truth with more than 18,000 documented lies and mistruths. And when it comes to  leadership, he says,  it’s up to the governors.

The president could be a crisis leader who becomes legendary by saying  some version of  “The buck stops here.” But with Trump it’s all literal. Whatever’s good for Trump.

By not taking responsibility and not leading, he thinks he has a way to winning in November! Winning in November with an American death toll that is heading toward 90,000 and could get a surge later if indeed states are opening up too soon.

But that’s seems to be the strategy: Playing dumb. Only it’s OK because the American public is dumber. Especially when it comes to basic things.

Mask or no mask? Test or no test? Social distancing? Only, apparently, from common sense.

The great depression is that hole that people are dying to crawl through to fight the virus empty handed.

But it’s Trump’s only strategy: To urge states to open up to ward off the worst economy since the Great Depression. And to fuel it by calling everything else fake news.

The only way he can do it is by tempting the death toll. And as it rises, the only thing missing is a real sense of public mourning.

The Trump administration seems to have lost all sense of humanity and just sees the death toll as an extension of the unemployment numbers and the yo-yo that is the Dow Jones.

Not even the White House is immune not when  Fauci himself went into self-quarantine along with the CDC and FDA heads, out of precaution this week

On my podcast, “Emil Amok’s Takeout,” in the opening monologue, I talk about the news that Stephen Miller’s wife has tested positive. Miller is the architect of the Trump  administration’s heinous immigration policy. Listen to my take on the Miller family on  the podcast.

But here I want to discuss the valet who served Trump his burgers and Diet Cokes, and how the valet has tested positive.

Trump named Miller’s wife, Katie, a White House staffer,  to the public. Why no ID on the valet? It may be military protocol, but chances are, the valet is a person of color.

In the past, the valets rise up the ranks in the Navy. They are enlisted personnel who rise to ensign level and often become stewards and valets. The whole thing about the valet and sometime driver with close proximity to the president just made me think of Bayani Nelvis, a member of my Filipino American Hall of Fame.

Nelvis was the Filipino in the pantry, the valet to Bill Clinton. And he was the “man of the hour” for a short time during the Monica Lewinsky affair. The Starr report tried to make Nelvis the man who could identify whether Clinton and Lewinsky were ever alone. Turns out Nelvis was alone more with Lewinsky, chatting her up when she came to visit the Oval Office, all cordially and appropriately. As it turned out, Nelvis was not the smoking gun. He was the dutiful valet and that’s all.

It’s a little tidbit of history but indicative of the vantage point of this unidentified valet who serves Trump his sodas, perhaps with or without a splash of Covid.

History will note when the valet got the virus, everyone in the White House began to take matters seriously.

But what do you expect from a president who hired undocumented workers for his golf courses and properties while espousing harsh deportation and anti-immigrant policies. (Oh, there’s Stephen Miller again).

Once again, the message is clear if you’re a person of color in the U.S.

When it comes to the virus, Trump says, “Drop Dead.”

An interview with Prof. E.J. Ramos David
My podcast monologue goes into my feelings about Miller and his family. I also talk about Mother’s Day under lockdown and other things (e.g., do you miss sports? Is zooming each other sport enough?).

But the podcast” main event is Prof. E.J. Ramos David, of the University of Alaska, and an expert on colonial mentality. Filipinos are especially prone because we were colonized by the U.S. as its very first colony.

Colonial mentality is real. Listen to the podcast. You have nothing to lose but your change.

Emil Guillermo is journalist and commentator who writes a column for the North American Bureau. Listen to his “Emil Amok’s Takeout” wherever you podcast or at amok.com. Twitter @emilamok