As Trump urges reopening, thousands getting sick on the job 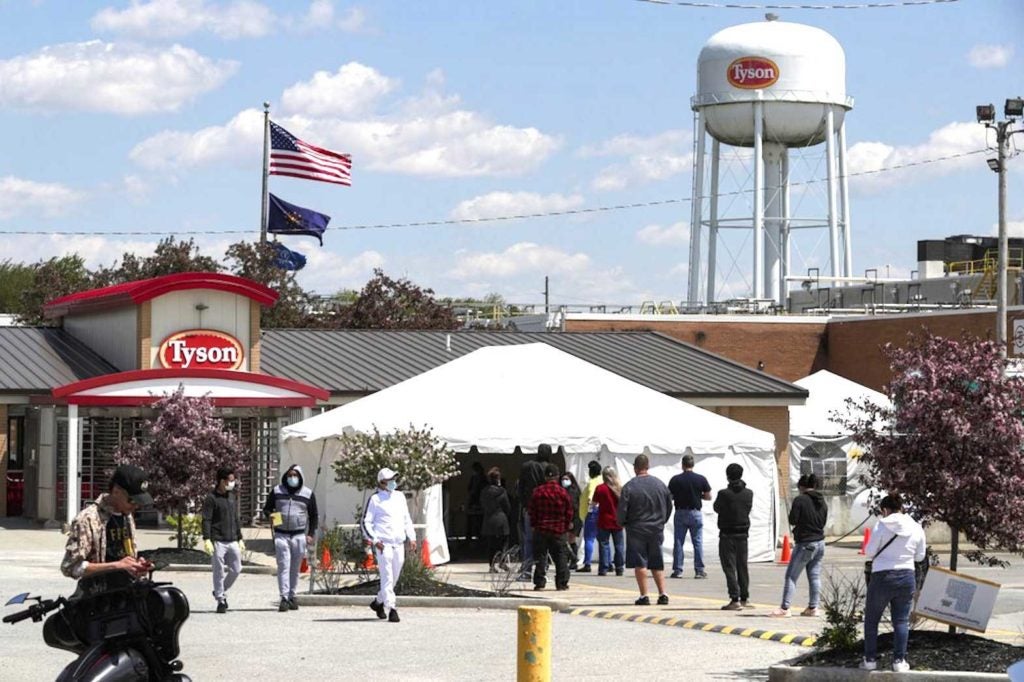 Workers line up to enter the Tyson Foods pork processing plant in Logansport, Ind., Thursday, May 7, 2020. In Cass County, home to the Tyson plant, confirmed coronavirus cases have surpassed 1,500. That’s given the county — home to about 38,000 residents — one of the nation’s highest per-capita infection rates. (AP Photo/Michael Conroy)

NEW YORK  — Even as President Donald Trump urges getting people back to work and reopening the economy, an Associated Press analysis shows thousands of people are getting sick from Covid-19 on the job.

Recent figures show a surge of infections in meatpacking and poultry-processing plants. There’s been a spike of new cases among construction workers in Austin, Texas, where that sector recently returned to work. Even the White House has proven vulnerable, with positive coronavirus tests for one of Trump’s valets and for Vice President Mike Pence’s press secretary.

The developments underscore the high stakes for communities nationwide as they gradually loosen restrictions on business.

“The people who are getting sick right now are generally people who are working,” Dr. Mark Escott, a regional health official, told Austin’s city council. “That risk is going to increase the more people are working.”

Austin’s concerns will likely be mirrored in communities nationwide as the reopening of stores and factories creates new opportunities for the virus to spread.

To be sure, there are plenty of new infections outside the workplace — in nursing homes, and among retired and unemployed people, particularly in densely populated places such as New York City, Chicago, Philadelphia and urban parts of New Jersey and Massachusetts.

Yet of the 15 U.S. counties with the highest per-capita infection rates between April 28 and May 5, all are homes to meatpacking and poultry-processing plants or state prisons, according to data compiled by the AP.

In the federal prison system, the number of positive cases has increased steadily. As of May 5, there were 2,066 inmates who’d tested positive, up from 730 on April 25.

The No. 2 county on AP’s list is Nobles County in Minnesota, which now has about 1,100 cases, compared to two in mid-April. The county seat, Worthington, is home to a JBS pork processing plant that employs hundreds of immigrants.

‘I risked my life’

“One guy said to me, ‘I risked my life coming here. I never thought something that I can’t see could take me out,’” said the Rev. Jim Callahan of St. Mary’s Catholic Church in Worthington.

Nebraska’s Dakota County, home to a Tyson Foods meat plant, had recorded three cases as of April 15, and now has more than 1,000. There have been at least three Covid-19 deaths, including a Muslim woman from Ethiopia who was among 4,300 employees at the Tyson plant. “These are sad and dangerous days,” the imam of a regional Islamic center, Ahmad Mohammad, told the Siouxland News.

In northern Indiana’s Cass County, home to a large Tyson pork-processing plant, confirmed coronavirus cases have surpassed 1,500. That’s given the county — home to about 38,000 residents — one of the nation’s highest per-capita infection rates.

The Tyson plant in Logansport, Indiana, was closed April 25 after nearly 900 employees tested positive; it resumed limited operations Thursday after undergoing deep cleaning and installation of Plexiglas workstation barriers. Company spokeswoman Hli Yang said none of the 2,200 workers would return to work without being tested.

Also hard hit by recent infections are counties in Virginia, Delaware and Georgia where poultry-processing plants are located.

In New York, the hardest-hit state during most of the pandemic, a new survey suggests that factors other than the workplace were involved in many recent cases.

The survey of 1,269 patients admitted to 113 hospitals over three recent days confounded expectations that new cases would be dominated by essential workers, especially those traveling on subways and buses. Instead, retirees accounted for 37% of the people hospitalized; 46% were unemployed.

“We were thinking that maybe we were going to find a higher percentage of essential employees who were getting sick because they were going to work, that these may be nurses, doctors, transit workers. That’s not the case,” said Gov. Andrew Cuomo.

Though the elderly continue to account for a disproportionate share of Covid-19 cases, the federal Centers for Disease Control and Prevention says the age ratio is changing. In January-February, 76% of cases involved people 50 or older. Since March, only about half the cases are of that age range.

Many health workers were among the earliest Americans to test positive. They continue to be infected in large numbers.

Gerard Brogan, director of nursing practice for the California Nurses Association, says as many as 200 nurses a day tested positive in California recently. Nationwide, he says the National Nurses United had tallied more than 28,000 positive tests and more than 230 deaths among health workers.

Among those recently testing positive was Dr. Pramila Kolisetty of Scarsdale, New York, who has a rehab and pain management practice in the Bronx and is married to a urologist.

Even after New York imposed an extensive lockdown, she went to her office two to three times a week while trying to transition to telemedicine.

“It took time for us to get ourselves organized,” she said. “We can’t just close the office and say, that’s it.”

Some of her staff fell sick with Covid-19, and she started feeling symptoms a few weeks ago. After testing positive, she isolated at home and is now practicing telemedicine.

“Much of this comes down to what you do to protect yourself,” Cuomo said at a recent briefing. “Everything is closed down, the government has done everything it could. … Now it’s up to you. Are you wearing a mask, are you doing the hand sanitizer?”