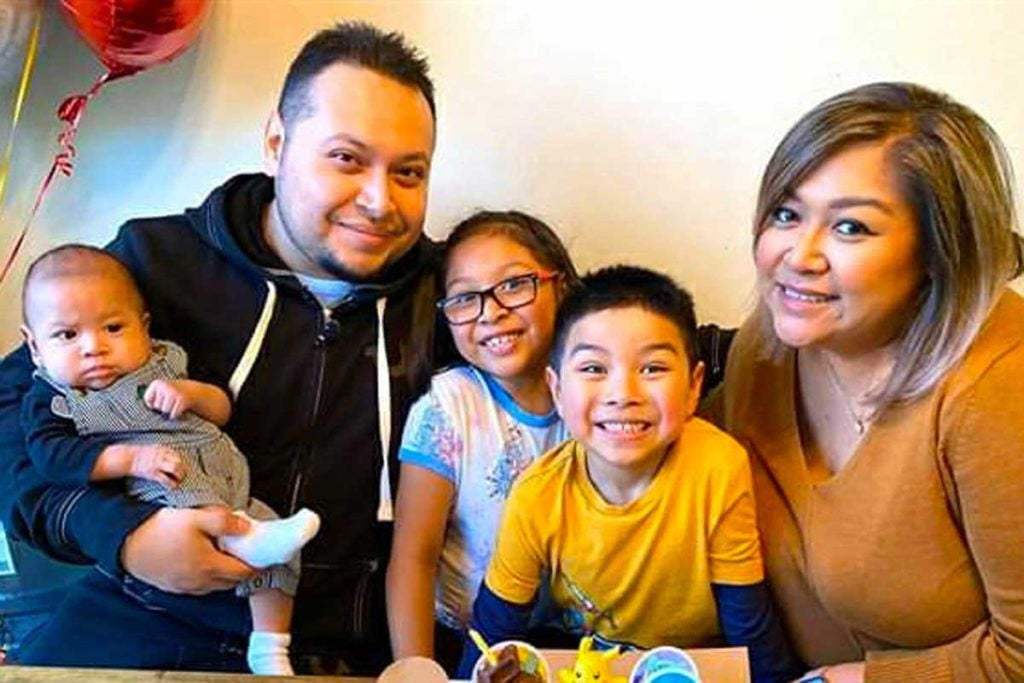 CHICAGO — It should have made Krist Angielene Guzman feel victorious. A strike of Illinois Nursing Home Health workers planned on May 8 was averted when owners of the facilities gave in to the demands of the front liners for adequate protective personal equipment (PPE) and $15/hour minimum wage.

But the 35-year-old nurse and mother of three died of Covid-19 on May 2 at the Amity Adventist Hospital in the City of Bolingbrook, 28 miles southwest of this city’s downtown. She had advocated for better treatment of medical workers like her.

Guzman’s cousin, Jeschelyn Pilar, described her as “fierce, vivacious, and never shy to express her opinion.”

Guzman died was in the same hospital where she gave birth last December to a son, Leandro, who was named after her uncle, Dr. Leandro Resurreccion III, a pioneering pediatric physician and liver transplant surgeon who inspired her niece to be a nurse.

Tragically, Dr. Resurreccion, 57, head of the pediatric center of the Philippine Children Medical Center in Manila, on March 31, had also succumbed to the coronavirus.

Resurreccion’s death was extensively covered by all major Manila dailies and networks, hailing him as a hero, great surgeon, teacher and academician. Guzman had been devastated by her uncle’s passing, posting on Facebook how he had mentored her.

On April 2, Guzman wrote, “He has always been my idol and I wanted to be just like him!” At that time Guzman was ill with strep throat but tested negative for covid-19. She stayed home for two weeks to recover.

Guzman went back to work April 20 at Meadowbrook Manor Bolingbrook which, with 10 deaths and 93 confirmed coronavirus cases among residents and employees, is one of the hardest-hit nursing homes in Illinois. Her husband, Omar Guzman, also works there as a nursing assistant.

On April 23, Guzman posted photos of herself at work wearing a mask and goggles for protection from Covid-19. It was reported that she was concerned about the nursing home management’s inadequate PPE at work. She made her own masks and brought her own goggles.

On social media, the outspoken nurse posted: “These are the days of our lives,” with her hashtags “proud nurse” and “praying for my patients.”

With the ongoing demand to ease up on the lockdown, her cousin Jeschelyn Pilar said, “(Angeliene) wouldn’t be happy about people coming out of this early …she wanted people to stay home.”

Guzman’s Facebook posts indicate the dangers of Covid-19 were very much on her mind in the weeks before her death. On April 15, she reposted : “‘Essential workers’ sounds so lame. So from this day forward, we shall be known as the ‘Suicide Squad.’”

Guzman admonished further, “Keep washing your hands, people,” as well as instructions on how to make your own mask at home.

Nine days before she died, the pro-active front liner posted: Angeliene Guzman felt the COVID symptoms on April 25. She got tested once more. This time, she was positive. Afraid to infect her family she checked in at a hotel.

Again her cousin Pilar recalled,  “Angeliene was joking about being bored as she self-quarantined…otherwise in good spirits — despite a steady fever above 100 degrees.” Then, on May 1, she was admitted to the hospital with low oxygen levels and labored breathing.

“She was scared, but in no way, shape or form did she think she’d pass away from this,” Pilar said. “She was a fighter. She said, ‘I’m going to kick Covid’s butt.’ ”

Guzman died that next evening after going into cardiac arrest while intubated at a hospital across the street from the nursing facility where she and her husband worked. Angeliene was said to be a couple of courses short of earning a higher degree in nursing.

Born in the Philippines, and daughter of U.S. Navy petty officer, Angel Castro, she had lived and been educated  in the Philippines, Japan, Iceland and California due to the demand of her father’s work. Angeliene had summed up her experiences as something that made her skillful in dealing with challenging situations.

Similar to the passing of her idol-uncle, Dr. Resurreccion, her death was also front page news in this city’s top two newspapers, Chicago Tribune and Chicago Sun-Times, which ran extensive investigative stories about the precarious plight of health workers during the current, especially in nursing homes. Nearly 5,000 Covid cases in Illinois are of workers in health care. As of May 8, there were 71,000 Covid-19 cases in Illinois with 3,111 deaths.

Angeliene’s husband, Omar Guzman, also tested positive for Covid-19 but is not in the hospital. His wife’s two sisters came from out of state to assist him in the funeral arrangement for Angeliene.

But Omar had the painful task of telling two of their children, Livvy Roque, 6, Xavi Lionel, 5, that their “mommy is not coming back.” Her cousin Pilar set up a “GoFundMe” page to help the grieving family, and as of May 6, has raised $40,000.

In an interview with the Chicago Tribune, Pilar appealed to everyone, in her cousin’s memory, to heed safety guidelines of sheltering at home and social distancing for the sake of others who are risking their lives to contain the virus,.

“This disease is so vicious and unpredictable, we have to do whatever we can to eradicate it,” Pilar said. “If it means to stay home, then just do it, please. That’s what she would say if she were here: Just stay home.”