Filipino workers in another Canada meat plant cope with Covid-19 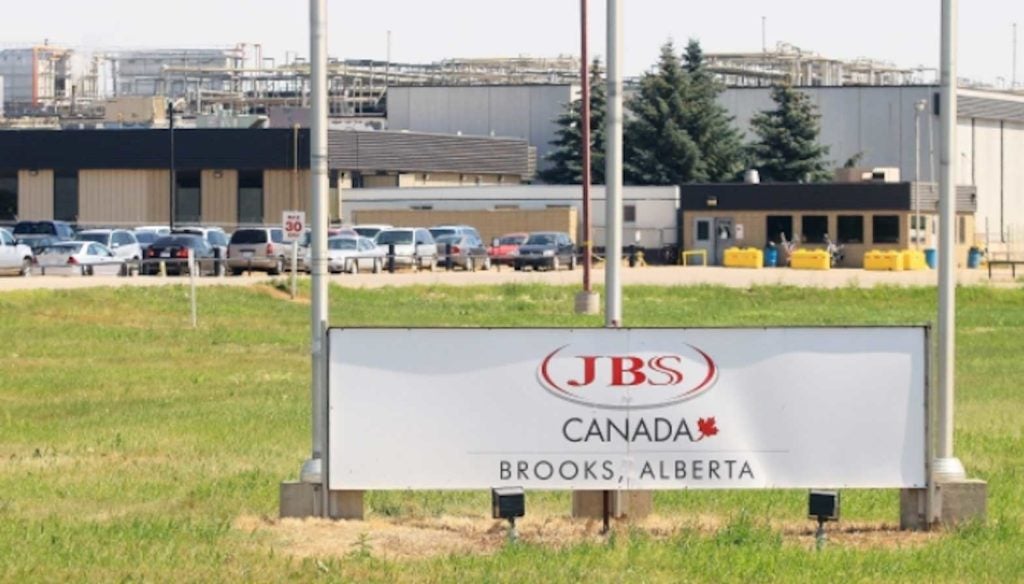 BROOKS, Alberta – Duds Miranda, 37, will be returning to work this week after recuperating from the dreaded Covid-19, but not without hesitation.

The Filipino worker at JBS Food Canada Inc. meat processing plant in Brooks, Alberta, credits his recovery to his housemates who helped him get through the virus.

Miranda, a temporary foreign worker who arrived here in September 2019, is among the 497 workers at JBS who recovered from the virus. As of May 8, the number of Covid-19 infections among workers at JBS came to 593, with 96 active cases.

Outside the facility, the city has seen 432 recover while 595 remain as active cases.

There are approximately 2,400 workers at the plant, many of whom are Filipino, according to their union, the United Food and Commercial Workers (UFCW).

JBS refuses to temporarily shut down, despite rising cases and a petition from the community asking the management to heed the call in order to protect its workers.

The outbreak at the plant is only half the number of infections at Cargill Foods in the outskirts of High River, Alberta, one of Canada’s epicenters where some 946 workers have been downed by the virus, resulting to two deaths.

The recent death involves a Filipino father who was visiting his son and his family in High River who battled the virus for 13 days. He contracted the virus from his son who works at Cargill.

To date, Olymel L.P. in Red Deer, another major meat plant in Alberta, does not have a single case of Covid-19. The zero infection is attributed to daily health and safety meetings, as well as busing the workers and equipping the with protections, said the union representing the meat plant workers at Cargill and JBS.

No outbreaks are seen in meat plants where workers are heard and their concerns promptly addressed, said Michael Hughes, communications coordinator for UFCW Local 401 in an interview.

“We are seeing a strong trend where, in meat plants where workers’ voices are ignored for the sake of production, there are outbreaks; in plants where workers are meaningfully included in health and safety committees and their concerns are heard and promptly addressed – no matter the cost – we have not seen outbreaks,” he said.

A recent review by the province’s Occupational Health and Safety showed workers were not represented while the management was conducting its own investigation as to what led to the outbreak at Cargill.

This violation of the OHS Act should not have allowed the plant to reopen on May 4, said Hughes.

“This plant is the site of the largest outbreak in North America, and employees’ concerns were not being heard. The plant shouldn’t be open until employees are satisfied that it can run safely and in accordance with OHS laws,” added Hughes.

“If they can’t follow safety laws, including having worker representation in health and safety committees, they shouldn’t be allowed to operate. It’s that simple.”

UFCW has filed a labor practice complaint before the Alberta Labour Relations Board, which will be heard this week, naming both Cargill and the Government of Alberta as respondents.

“The [province] has facilitated the side-stepping of our union in the workplace by allowing these companies to essentially ignore our calls for urgent protections for food workers,” said Hughes.

The province’s top medical doctor has given clearance for the meat plants to operate as long as public health measures are followed at their sites.

In her public address on May 7, Dr. Deena Hinshaw had said the meat plants have consulted with her, including Occupational Health and Safety, Alberta Health Services and the Canadian Food Inspection Agency and have implemented safety controls within their sites to prevent further spread of the disease.

For Miranda, it was difficult to pinpoint how he contracted Covid-19. The workers wear personal protective equipment while barriers have been put up in between stations on the production floor. “But you don’t know how clean surfaces are since a lot of people work at the site,” he said.

UFCW pointed out social distancing is difficult to achieve in these plants as they are designed around social proximity.

“The only way to meaningfully create social distancing is to implement measures the industry tends to regard as drastic: lower line speeds, spaced our workstations, staggered breaks, less people crowding into lunchrooms and bathrooms, and so on,” said Hughes.

Temporary foreign workers employed by JBS are housed together, sharing food, carpool and oftentimes spending time together in recreational activities. Miranda lives with three other Filipino workers at JBS who are self-isolating until May 17, all four of them have the same shift at the plant.

In April, the province’s top doctor pointed to carpooling as one area of concern when the number of infection at Cargill jumped by over 800 percent.

Sharing their resources together, however, enabled Miranda to survive the viral infection with the help of his co-workers and housemates.

“They were the ones making food for me and serving it at my doorstep. They call me when it is ready. We chatted online to let them know what I needed and to make feel less isolated,” he said, recalling his ordeal with the virus.

He wore mask and gloves when going to the bathroom and would request help sanitizing when he finished.

Miranda’s cough and fever subsided after 20 days. He was cleared by an Alberta Health Services nurse on May 5.

Although he has recovered, Miranda did not disclose that he had been ill from the virus to his family in Compostela Valley in southern Philippines to allay their fears.

Too little, too late

Improvements are now being seen in both plants, although the positive changes are “too little too late” and the question remains as to why the plants took so long to respond accordingly, said UFCW’s Hughes.

“We believe our pressure on these companies has been greatly complimented by media and public attention on these plants. These are places that don’t want to be seen,” he said.

The province is planning to re-open sections of its economy in phases beginning mid-May amid government data showing communities are “flattening the curve”. In light of easing restrictions, the province has launched a contact tracing application.

An online petition posted on change.org aligned with UFCW’s call to temporarily shut down JBS. The petition has now gathered more than 18,000 signatures.

“Production at the plant is not conducive to physical-distancing and masks and PPE provided are inadequate to protect against the spread. Hundreds of workers have stopped coming to the work on the basis of safety and those that are working have expressed that they do not feel safe,” read the petition.

Aside from the two-week closure, UFCW is also asking for full compensation for the workers to allow for self-isolation and testing. The union would like the management to work with them and involve the workers in decision-making.

UFCW is working with grassroots groups such as Migrante Alberta and Action Dignity who have provided some support for the workers who are isolating.

“One thing is clear: our members are not invisible. Everyone in Canada should know about them, the hard work they do, and the important role they play in bringing food to the tables of Canadians,” said Hughes.

“The silver lining in this situation is that they are speaking up, and Canadians now know a little bit more about who makes their food.”

UFCW representatives phone union members to check in and see if there is anything they need.

“We have been constantly emailing and sending text members to our members as new information comes to us and developed, and we are now also engaging in surveys so that we continue to understand the needs and perspectives of our members as we continue to advocate and fight for them,” said Hughes.

As of this writing, JBS Foods has not responded to a request for interview by INQUIRER.net.#