Other Covid Risks: Race, income, ZIP code can sway who lives or dies 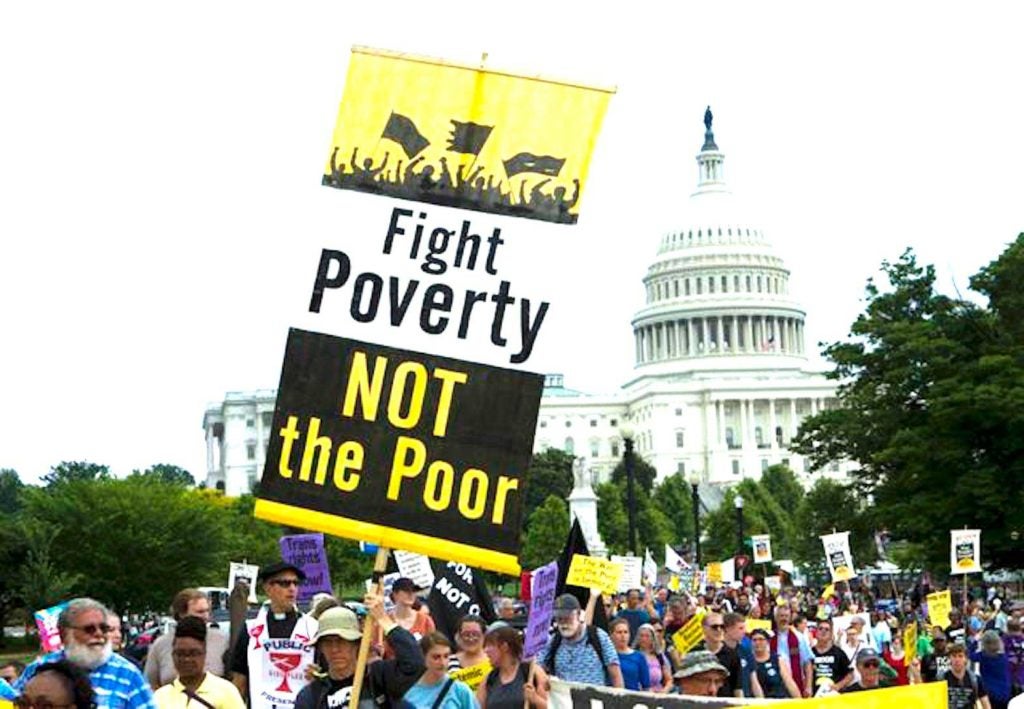 It started with a headache in late March. Then came the body aches.

At first, Shalondra Rollins’ doctor thought it was the flu. By April 7, three days after she was finally diagnosed with COVID-19, the 38-year-old teaching assistant told her mom she was feeling winded. Within an hour, she was in an ambulance, conscious but struggling to breathe, bound for a hospital in Jackson, Mississippi.

An hour later, she was dead.

“I never in a million years thought I would get a call saying she was gone,” said her mother, Cassandra Rollins, 55. “I want the world to know she wasn’t just a statistic. She was a wonderful person. She was loved.”

Shalondra Rollins, a mother of two, had a number of factors that put her at higher risk of dying from COVID-19. Like her mother, she had diabetes. She was black, with a low-salary job.

And she lived in Mississippi, whose population is among the unhealthiest in the country.

She was one of 193 Mississippi residents who have died of COVID-19, and one of more than 4,800 with confirmed illnesses. 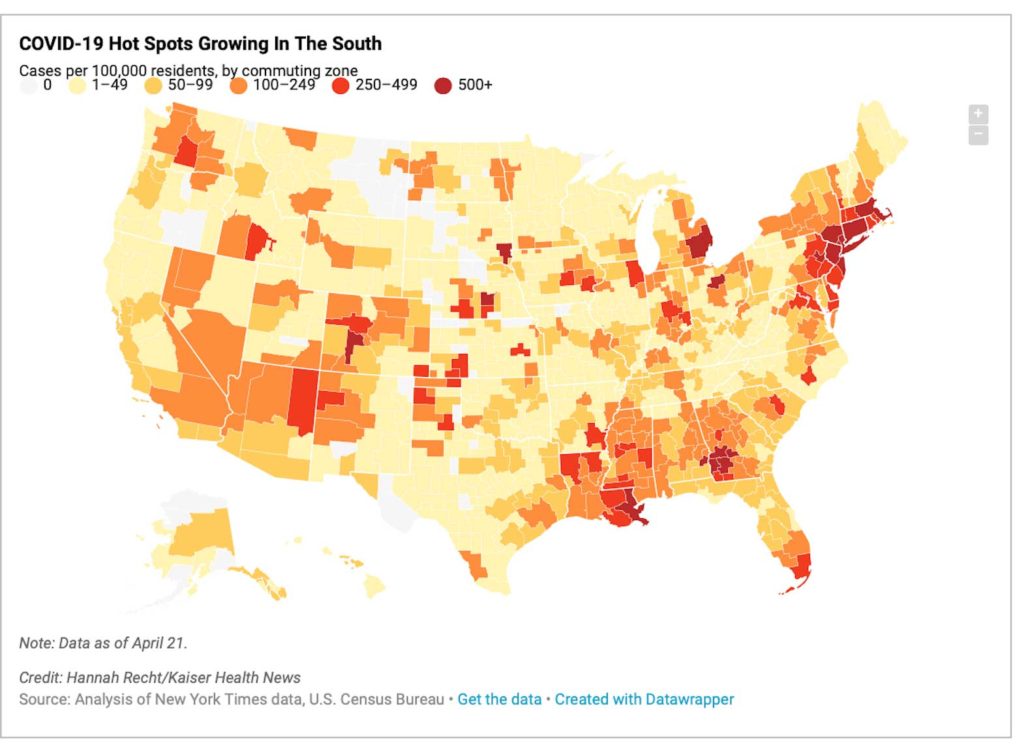 Doctors know that people with underlying health conditions ― such as the 40% of Americans who live with diabetes, hypertension, asthma and other chronic diseases ― are more vulnerable to COVID-19. So are patients without access to intensive care or mechanical ventilators.

Yet some public health experts contend that social and economic conditions ― long overlooked by government leaders, policymakers and the public ― are even more powerful indicators of who will survive the pandemic. A toxic mix of racial, financial and geographic disadvantage can prove deadly.

“Most epidemics are guided missiles attacking those who are poor, disenfranchised and have underlying health problems,” said Dr. Thomas Frieden, a former director of the Centers for Disease Control and Prevention.

Federal health officials have known for nearly a decade which communities are most likely to suffer devastating losses ― both in lives and jobs ― during a disease outbreak or other major disaster. In 2011, the CDC created the Social Vulnerability Index to rate all the nation’s counties on factors such as poverty, housing and access to vehicles that predict their ability to prepare, cope and recover from disasters. 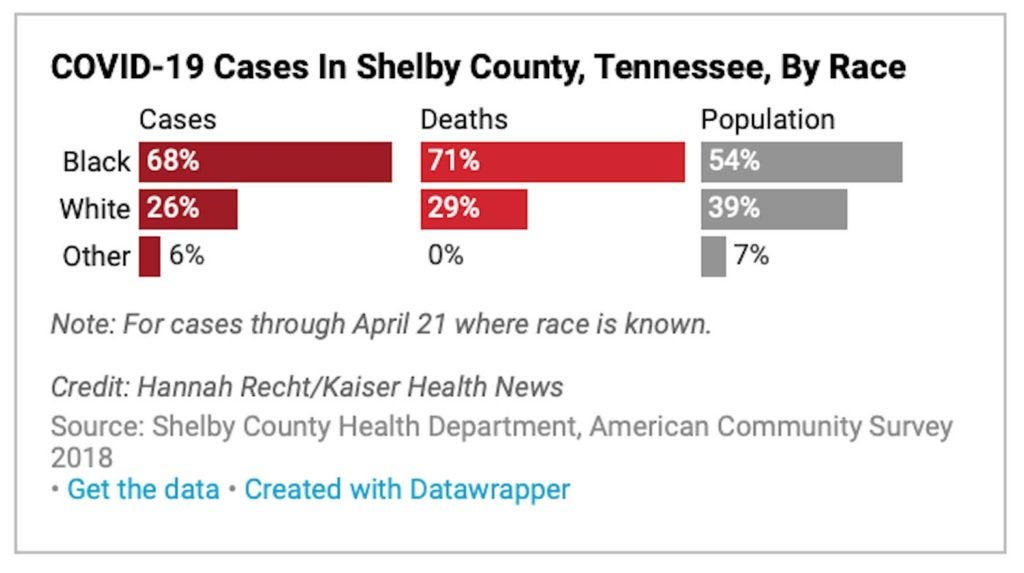 Yet the country has neglected to respond to warning signs that these communities ― where people already live sicker and die younger than those in more affluent areas ― could be devastated by a pandemic, said Dr. Otis Brawley, a professor at Johns Hopkins University.

“This is a failure of American society to take care of the Americans who need help the most,” Brawley said. Although vulnerable counties are scattered throughout the country, they are concentrated across the South, in a belt of deprivation stretching from coastal North Carolina to the Mexican border and deserts of the Southwest.

Some of the most vulnerable communities are in Mississippi, which has the highest poverty rate of any state; Indian reservations in New Mexico, the second-poorest state, where thousands of households lack running water; and cities such as Memphis, Tennessee, a hot spot for asthma that recently ranked among the bottom 15 metro areas in offering safe, livable housing to its residents.

The first U.S. COVID-19 cases were detected in metropolitan areas, with Hispanics and blacks making up a disproportionate number of deaths in New York City. Outbreaks are now flaring in rural communities, the South and Upper Midwest. Both the New Orleans and Albany, Georgia, areas have infection rates above 1% of their populations. More than 1,600 people have been diagnosed with COVID-19 in the Sioux Falls, South Dakota, home to a meat-packing plant that employs immigrants and refugees from around the world.

Whether COVID-19 patients live or die probably depends more on their baseline health than whether they have access to an intensive care bed, Brawley said. Some hospitals report that only about 20% of COVID-19 patients on ventilators survive.

Many public health experts fear that COVID-19 will follow the same trajectory as HIV and AIDS, which began as a disease of big coastal cities ― New York, Los Angeles and San Francisco ― but quickly entrenched in the black community and in the South, which is considered the epicenter of the nation’s HIV/AIDS outbreak today.

Like HIV and AIDS, the first COVID-19 cases in the United States were diagnosed in “jet-setters and people who traveled to Europe and other places,” said Dr. Carlos del Rio, professor of infectious diseases at the Emory University Rollins School of Public Health. “As it settles in America, [COVID-19] is now disproportionately impacting minority populations, just like HIV.”

Mississippi: The Legacy Of Segregation

One in 5 Mississippi residents live in poverty.

It is also in the heart of the “Stroke Belt,” a band of 11 Southern states where obesity, hypertension and smoking contribute to an elevated rate of strokes. Blacks make up 38% of the state population ― but more than half of COVID-19 infections in which race is known. They also account for nearly two-thirds of deaths from the virus, according to the state health department. People in low-income or minority communities are more likely to work in jobs that expose them to the virus ― in factories or grocery stores and public transit, for example. They’re less likely to have paid sick leave and more likely to live in crowded housing. They have high rates of chronic illness. They also have less access to health care, especially routine preventive services. Mississippi is one of 14 states that have not expanded Medicaid.

“If they do have chronic conditions such as hypertension or diabetes,” Frieden said, “the health system doesn’t work as well for them, and they are less likely to have it under control.”

Minority communities suffer the legacy of segregation, which has trapped generations in a downward economic spiral, said Dr. Steven Woolf, a professor at Virginia Commonwealth University in Richmond.

“The fact that African Americans are more likely to die of heart disease is not an accident,” Woolf said. “COVID-19 is a very fresh, vivid example of an old problem.” Research shows that “stress, economic disadvantage, economic deprivation not only affect the people experiencing it, but it’s passed on from one generation to another,” Woolf said.

Tonja Sesley-Baymon, president and CEO of the Memphis Urban League, noted that social distancing is a privilege of the affluent. Just getting to work can put people at risk if they ride the bus. “If you take public transportation, social distancing is not an option for you,” she said.

Dr. LouAnn Woodward, the University of Mississippi Medical Center’s top executive, has treated many people in the emergency room whose life-threatening crises could have been prevented with routine care. She’s seen diabetes patients with blood sugar levels high enough to put them in a coma.

Health insurance is only part of the problem, she said. When Woodward asked one woman why she waited so long to seek treatment for her breast tumor, the woman said, “I just got a ride.”

Cassandra Rollins, the youngest of 11 siblings, knows hardship. Two of her sisters were murdered. She helped raise their children, who are now grown.

She raised four of her own children as a single mother. Shalondra, the eldest, often acted as a second mom to her brother 18 years younger. Shalondra even attended her brother’s parent-teacher conferences when her mother couldn’t leave work.

In September, her brother died by suicide at age 20.

When her daughter was diagnosed with COVID-19, Cassandra Rollins said, “we had just gotten to a point where we didn’t cry every day.”

The coronavirus is battering impoverished communities. More than 1,200 COVID-19 cases and 48 deaths have been diagnosed in the Navajo Nation, the country’s largest Indian reservation, located on 27,000 square miles at the junction of Arizona, New Mexico and Utah.

There are few hospitals in the region, an area the size of West Virginia, and most lack intensive care units.

The communities that make up the Navajo Nation have among the worst scores on the CDC’s Social Vulnerability Index. Thirty-nine percent of residents live in poverty.

With a shortage of adequate housing, many live in modest homes with up to 10 people under one roof, said Jonathan Nez, Navajo Nation president. That can make it harder to contain the virus.

“We’re social people,” Nez said. “We take care of our elders at home.”

The first residents tested positive in mid-March, and cases skyrocketed within weeks. In the eight counties comprising the Navajo, Hopi and Zuni nations, 1,930 residents have tested positive and 79 have died. That’s more cases per 100,000 residents than the Washington, D.C., area. The Navajo Nation has taken aggressive steps to control the outbreak, including weekend curfews enforced by checkpoints and patrols.

But more than 30% of its households lack a toilet or running water, according to the Navajo Water Project, a nonprofit that installs plumbing in homes. Residents often drive long distances to fill containers with water, Nez said.

Having no running water makes it difficult to properly wash hands to prevent coronavirus infections.

Maintaining a healthy weight on the reservation is challenging, Nez said. Residents commonly spend hours daily traveling by car to and from work, leaving little time to exercise or cook. While the region has fast-food restaurants, far fewer stores sell fresh fruits and vegetables, he said, adding, “we’re in a food desert.”

Most children with COVID-19 are at low risk of death. But many adults felled by the disease suffer the long-term effects of health damage they suffered as children, such as lead exposure or asthma, said Brawley of Johns Hopkins.

More than 208,000 homes in Memphis, Tennessee, pose potential lead hazards. Lead ― toxic at any level ― can cause brain damage and lead to hypertension and kidney disease, conditions that increase the risk of complications in COVID-19 patients.

Shelby County, which includes Memphis, is home to 937,000 residents, 14% of the state’s population. Its COVID-19 burden is outsized, representing one-quarter of the cases and deaths in Tennessee. Where race is known, most patients have been black.

The National Center for Healthy Housing ranked Memphis the worst metropolitan area for housing in 2013, although its rating has since improved slightly.

Memphis, with older housing stock and one of the poorest big U.S. cities, is a hot spot for asthma, which afflicts up to 13.5% of its children. The CDC has said that people with asthma may be at higher risk from COVID-19, although some hospitals haven’t seen higher death rates in this population.

Blacks are almost three times as likely to die of asthma as whites, according to the Health and Human Services’ Office of Minority Health. Many children develop asthma after being exposed to tobacco smoke or substandard housing with dust mites, cockroaches, rodents and molds. Some suffer for a lifetime.

Asthma patients often go through “a revolving door in and out of the emergency department,” with an increased risk of death, she said.

Health experts say these health risks could remain long after the pandemic passes.

“The question is, ‘Do we value all life equally?’” said Dr. James Hildreth, president and CEO of Meharry Medical College in Nashville, a historically black college. “If we do, we will find a way to address these things.”

Kaiser Health News analyzed COVID-19 case rates across the country and compared them to a number of demographic factors. KHN obtained COVID-19 data by county from The New York Times and populations from 2019 U.S. Census Bureau Population Estimates to calculate cases per 100,000 residents. The national map displays COVID-19 case rates per 100,000 by commuting zone, defined as a group of counties that approximate local economies and can cross state boundaries.

The charts comparing COVID-19 cases in Mississippi and Shelby County, Tennessee, by population and race are irrespective of Hispanic ethnicity because ethnicity is coded separately in the data.

COVID-19 cases and deaths by county: The New York Times