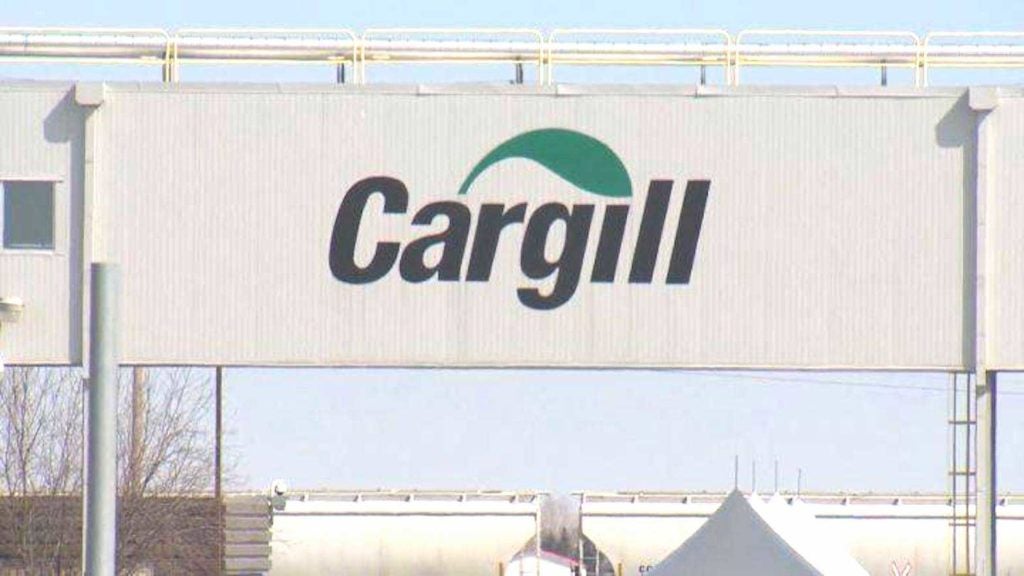 The Cargill meat plant in High River, Alberta was recently shut down due to a rise in coronavirus infections among its workers, many of whom are Filipino. SCREENGRAB

RED DEER, Alberta – The recent death of a worker infected by Covid-19 has sparked questions whether a meat processing plant, whose work force has a large number of Filipino immigrants, is meeting standards to keep its workers safe.

At Cargill Foods located near High River, the shoulder-to-shoulder manner by which workers have to do their work on the production floor was one of the safety issues posed by the workers’ union in light of the Covid-19 exposure of a handful of workers.

As of this writing, the number of infected workers has grown from an initial 38 to 480, many could be Filipino workers, according to sources interviewed by INQUIRER.net. The Cargill outbreak is now considered the largest in Canada.

About 70% of the workers are immigrants from the Philippines, a majority of whom obtained permanent residency through the provincial nominee program backed by their union, the United Food and Commercial Workers (UFCW).

The contagion has also spread to other members of the High River community, striking five health workers at a local seniors’ living facility and infecting some 140 others.

Letter to the mayor

The alarm about the outbreak was raised by the Filipino community in High River. A letter of appeal to temporarily shut down the plant was sent to the town mayor and the provincial health authority on April 12.

Through  community initiative to track down cases involving the plant workers, initial figure showed 38 workers were positive for Covid-19.

In a CBC interview, the mayor revealed that the town has no jurisdiction or power to shut down Cargill as the plant is situated just outside of High River.

A long-time Filipino worker, who spoke on condition of anonymity, said the crowding in major spaces inside the plant, such as bathrooms, locker rooms, dining area, and especially the production floor was a major factor in the spread. “With 2,000 workers, the plant is not set up properly to maintain distancing,” the worker said.

“The two-meter distance is impossible to implement the way the assembly line is designed,” he said. Had the facility shut down when cases were few, which at one point was only five, a major outbreak could have been avoided, he said.

“Shutting down the plant would have provided the workers the chance to isolate at home,” he added.

The worker pointed to increased demand for local supply because of the spring and upcoming summer time and also orders from China may have driven plant owners to maintain operation despite the workers getting sick.

About 85% of Canada’s beef supply is obtained from the “big three” in Alberta, namely Olymel L.P. in Red Deer, JBS Food Canada Inc. in Brooks and Cargill Foods in High River.

UFCW Local 401 representing the workers is calling on the federal government to intervene and conduct an independent investigation into the matter, despite major units of the provincial government stepping in.

In an interview with INQUIRER.net, Devin Yeager, UFCW Local 401 coordinator for food processing, packaging and manufacturing, said statements from the province’s labor, health, agriculture and occupational health and safety departments that the plant is safe to operate is not reassuring to the workers.

In a phone townhall meeting held by the local union for its members on April 18, the majority expressed disappointment in the management and province’s response to the outbreak, while fearing risk of continued exposure if measures are not properly put in place.

Yeager said the union is also calling on a fatality inquiry into the death of a Cargill worker from Covid-19 infection.

UFCW also questioned the province’s Occupational Health and Safety site inspection, which was done through video call, the union learned.

Referring to the plant’s temporary shutdown, “Had this happened a week ago, maybe we won’t be sitting now with over 500 affected and one death. The fact that this happened shows the company was taking no responsibility — they only acted because of the bad media attention,” he said.

The union has asked full payment for the workers during the shutdown period, noting, “A lot of the workers are supporting their families in their countries.”

The management has guaranteed 80 hours paid for the workers, but some workers claim only over 60 hours are being paid because weekends are not considered “work days.”

Yeager worries that with plant management ceasing communications with the union that the workers’ welfare remains at risk, following reports from its members that some are not being paid for the shutdown period.

“We are not happy with the lack of communication. We are not clear as to how long the temporary shutdown is going to last,” he said.

Multiple attempts have been made by INQUIRER.net to get the plant management’s side, via email to its general manager as well as, Jon Nash, Cargill Protein, North America lead, with no response thus far.

Lost income and the future of their employment are the main concerns for the workers, said Cesar Cala, volunteer for Philippines Emergency Response Taskforce based in Calgary.

“With temporary foreign workers, the status of their stay in Canada is tied to their employment at Cargill.  Many fear for their health, and felt that the company has not done enough to secure their safety at the plant.  Many workers who exhibited symptoms felt compelled to return to work too early,” he said in an interview.

Filipinos in Calgary, High River and Okotoks are also doing their share by delivering food for those in isolation, he said.

“As the situation progresses, the broader Filipino community can help by doing more of this and extending moral and support. Even more important is that working conditions in places like Cargill should be improved to make them safe.”

“In this crisis, the voices, rights, concerns and perspectives of the workers are often ignored. It is imperative that governments at all levels ensure that companies like Cargill respect their workers’ rights to a safe and healthy work place,” he added.

Another meat processing facility, JBS in Brooks, now has 124 infected workers, but work still continues at its site.