US Congress asked to monitor and ‘save’ Census 2020 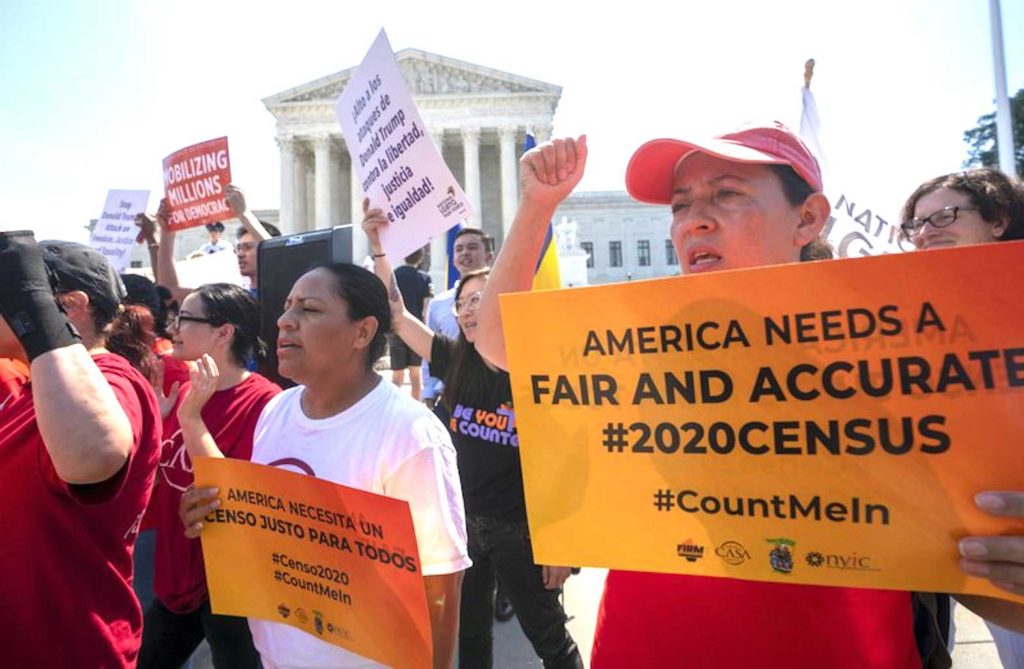 Demonstrators gather at the Supreme Court on Capitol Hill in Washington. A prominent Latino organization said Monday, Feb. 10, 2020, the U.S. Census Bureau needs to explicitly communicate there will be no citizenship question ahead of the 2020 count, or risk undercounting minority groups. (AP Photo/J. Scott Applewhite)

“A nightmare” is how Arturo Vargas, executive director of the National Association of Latino Elected Officials (NALEO), describes what the coronavirus pandemic has meant to the carefully planned efforts to make the nation’s Latino community count in the 2020 Census.

“We are moving forward with a new strategy and message, but deep down we know that there is no way to get to a full count without door-to-door visits” he said. “And at this point, we don’t know if the Census Bureau will be able to be on the street doing that follow-up work as planned in June (the original date would have been mid-May). I think by the end of this month the writing will be on the wall.”

NALEO and other groups continue to work to “turn the boat around” — to make the transition from hundreds of in-person events and follow-ups to paid and earned media to reach the so-called “hard-to-count” Latino community vulnerable to undercounts. But the confidence that the result will be reliable is fading with each passing day.

“Postponing the census until next year is an option that should be on the table,” Vargas added. “There is no reason to risk the health of the enumerators or the public.”  Congress will have to act because the statute sets two dates for delivering this data to Congress and the states. Brazil has already postponed its census.

Part of the nightmare for Vargas and other Latino activists is that so far the response from this population has been, on average, too low. While Latino communities tend to be undercounted in every census, this year the situation was already complicated. And then, the coronavirus hit.

The Trump administration’s handling of the last few years of preparation for the 10-year count mightily complicated things, including the decision to include a citizenship question that was finally rejected by the Supreme Court. The damage remains, however, as surveys continue to record that many Latinos still believe they will have to answer a citizenship question in the census.

Experts say this inhibits community members’ participation because they fear their data would be mishandled or used for immigration enforcement or other purposes.

Nationally, 48.6% of households already had answered the basic nine-question form by April 14, but the numbers were much lower, on average, in areas with high Latino populations, said Dorian Caal, a NALEO researcher and data analyst.

Leaders expect Latino participation to improve after more than 60 million paper questionnaires are sent in mid-April to people who have not responded online. Research indicates that the paper response is the one most favored by Latinos.

Some small cities with high Latino populations, particularly those with nearby rural areas populated by many farmworkers and migrants, have desperately low census response numbers. Two examples in Fresno County: The city of Huron has a 6.3% response and the city of San Joaquin 4.6%.

In California, whose response exceeds the national average, 49.2% of the population has filled out the census compared to the nation’s 48.6%. California has spent more than $180 million promoting the census to secure its piece of the pie. States like Texas, which spent no money on outreach, have seen a lower return — 44.2% so far.

The situation in tribal areas is even dimmer because of the difficulties of carrying out the work door-to-door at a time when many tribal nations are restricting access to their lands and have a negligible online response level.

Also having a negative effect is the suspension of a program called “update and leave” that reconfirms the addresses of highly mobile or remote households and where workers leave census packets in person, said Caal.

Although only 5% of households were on these “update and leave” lists, some states have higher percentages of such addresses. This is the case in New Mexico (37.7%) and Alaska (32.4%).

The fair distribution of more than $1.5 billion in federal spending and political representation in the nation over the next 10 years depends on an accurate census.

But the Census Bureau had no plans for carrying out a census during a pandemic. Just three days after this interview with Vargas, the unthinkable happened: Census Bureau leaders and Secretary of Commerce Wilbur Ross asked Congress for a four-month delay in the statutory deadlines for delivering population data to the executive and legislative branches.

The next day, President Trump said that perhaps this delay was “not enough” and that perhaps “we don’t have to ask Congress because it is an act of God.”

For NALEO, however, while the delay is logical, it represents a serious risk to the quality of the resulting data. There is a danger that the final result will be “incomplete and inadequate,” according to a statement from the organization.

Vargas called on Congress to intensify its oversight role of the face-to-face follow-up phase of the census to maintain the process’ integrity.

“Congress has the authority and obligation to work with the Bureau to take the necessary steps to ensure an accurate census of all U.S. residents,” he said.

The request by census leaders and the Department of Commerce would extend data collection until October 31, 2020, with the numbers delivered to the president and Congress by April 30 and July 31, 2021, respectively. President Trump´s current term in office ends January 20, 2021.

But according to the experts, time is not on the side of the census. The data will become more and more imprecise the further the fieldwork moves away from the April 1 date, which is when the “picture” of the country is supposed to be taken. All answers must be related by law to who was residing at home, at school or in the country on that day, and not after.

“The Constitution places the responsibility for the census in the hands of Congress,” according to a NALEO statement on April 14.  “In light of that obligation, it is time for Congress to step up to the plate and intensely monitor the 2020 Census if we are going to save it.“