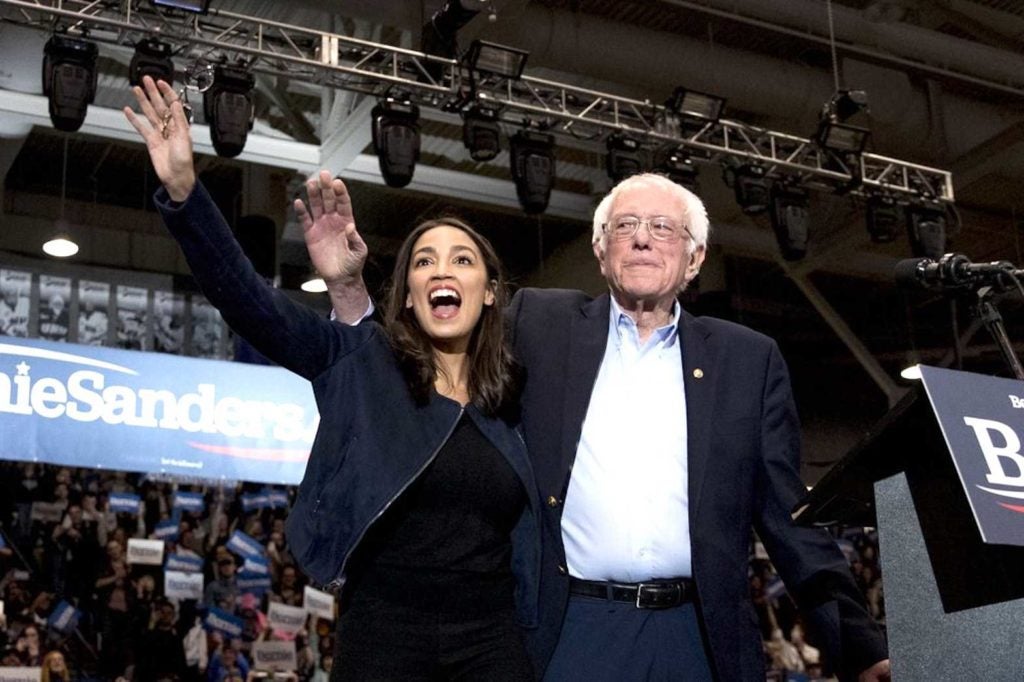 Democratic presidential candidate Sen. Bernie Sanders, I-Vt., accompanied by Rep. Alexandria Ocasio-Cortez, D-N.Y., left, takes the stage at campaign stop at the Whittemore Center Arena at the University of New Hampshire in Durham, N.H. Choosing a presidential candidate based primarily on loathing the alternative is not the strongest of electoral strategies. That’s why leaders of the progressive movement say many Americans who were enthralled by Bernie Sanders and his slogan of “Not Me. Us,” won’t be as likely to settle for Joe Biden. (AP Photo/Andrew Harnik)

Four years later, the couple is still passionate about the Vermont senator’s progressive agenda. But they’re open to voting for the relatively centrist Joe Biden if that’s what it takes to defeat President Donald Trump.

A week after Sanders’ exit left Biden as the presumptive Democratic nominee, the former vice president is working to win over voters such as Machado and Gibbons. The party is desperate to avoid a repeat of 2016, when ideological divides helped Trump win the White House.

Biden has made a series of proposals intended to appeal to progressives and won endorsements this week from Sanders and Massachusetts Sen. Elizabeth Warren, another liberal rival during the Democratic primary.

But the tensions that have weighed on Democrats for years aren’t suddenly evaporating. While some voters are making a practical calculation to beat Trump by supporting Biden, other leaders of the movement are urging caution until Biden embraces priorities such as the universal health care plan known as “ Medicare for All.”

“The Biden that exists now will not get a lot of votes from progressives currently inclined to not vote at all or to vote third party,” said Norman Solomon, co-founder of the activist organization Roots Action. “The only tool now to defeat Trump is Joe Biden, and the only way to sharpen that tool is to move him in a more progressive direction.”

AP VoteCast surveys of the electorate conducted before Sanders dropped out of the race show skepticism among his supporters about Biden. Across 17 states where the survey was conducted, 54% of Sanders backers said they would be dissatisfied if Biden were the nominee. Just 28% of all Democratic primary voters said the same.

In the three states that voted on March 17 — Florida, Arizona and Illinois — some Sanders supporters went further, vowing not to support Biden. Thirteen percent said they would definitely not vote for Biden, and an additional 10% said they probably would not.

A slim majority, 54%, indicated that they definitely would support the Democrat against Trump, while 23% said they probably would.

In Arizona, a state that Democrats are hoping to flip in November, 8% of Democratic primary voters overall said they would not vote for Biden in November. But among Sanders supporters, that figure increased to 17%. In Michigan, which flipped to support Trump in 2016 and is now a key 2020 battleground, 19% of Democratic primary voters said their vote in November depended on which candidate the party nominated. That figure climbed to 26% among Sanders voters.

There are factors working in Biden’s favor. For one, he’s consolidating support in the party much earlier than nominee Hillary Clinton did in 2016. That year, Sanders waited until just before the party’s July convention to endorse Clinton. Warren also waited until the primary was over to back Clinton.

In 2020, they are backing Biden sooner, and more aggressively.

Sanders told The Associated Press on Tuesday that it would be “irresponsible” for his supporters to sit back and see “the most dangerous president in modern American history” reelected.

“My job now is to not only rally my supporters, but to do everything I can to bring the party together to see that (Trump) is not elected president,” Sanders said.

The future of the progressive movement may rest with leaders such as Rep. Alexandria Ocasio-Cortez. The New York Democrat has long said she would back the ultimate Democratic nominee. She told Politico on Wednesday that she supports Biden “in solidarity with the families I represent.”

In an earlier interview with the AP, she urged Biden to take seriously both young voters and Latinos, two groups with whom he has struggled.

“I just want to make sure that we have a winning electoral strategy,” she said. “And if that strategy is 100% more affluent suburban voters, then fine. Perhaps districts and communities like mine aren’t as important, but I would like them to be, and I think that they should be, and I think young voters matter.”

Prospects for reconciliation between Biden and progressives may not all be bleak, however, especially with the election still more than six months away.

Jorge Trejo-Ibarra, a Las Vegas high school senior who will turn 18 in July, said he flirted with the idea of not backing Biden. But with the economy largely shuttered amid the coronavirus outbreak, he said he doesn’t think the U.S. can survive another four years of Trump.

“We can’t come back from this unless we have some very strong leadership in the next four years,” Trejo-Ibarra said, adding that he’s not excited about Biden, but is a realist.

“In democracies, you never have wins, you have compromises,” he said. “I guess I must compromise.”

Jack Wilsbach, a 21-year-old junior at Ohio State University, said he knows many Sanders supporters who will not support Biden. But he is convinced by his mother, sister and friends who are gay who he thinks will be hurt by a Trump victory.

“I would feel bad if I didn’t vote for (Biden) and that affected the outcome,” Wilsbach said. “I mean, I’m a white guy. I can kind of make the sacrifice to maybe live and be OK under Trump, but other people don’t have that luxury.”