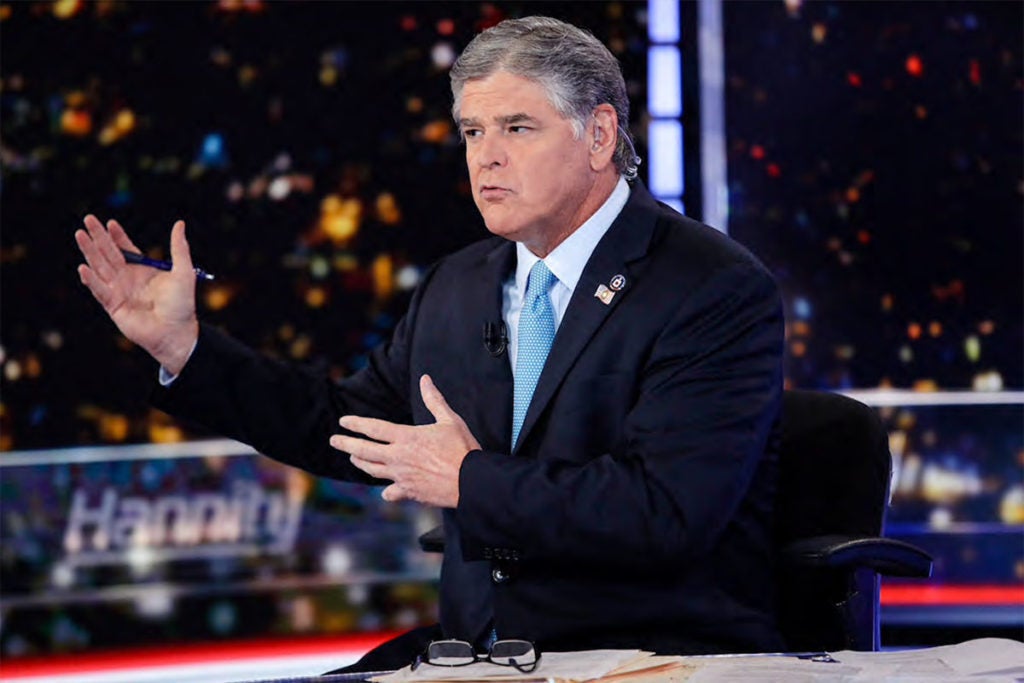 The network most popular with President Donald Trump’s supporters has added a daily coronavirus-themed show and extended news hours, is practicing social distancing on the air and is frequently featuring guests like Dr. Mehmet Oz and Dr. Nicole Saphier.

With the country hunkering down to protect against the virus’ spread, talk of “hysteria” and “panic” was gone Monday from the prime-time opinion lineup that is the network’s engine. Sean Hannity promised “facts without fear” and said that “we are all Americans.” Laura Ingraham said federal guidelines restricting movement should be taken extremely seriously.

Some things remained consistent: There was time to criticize Democrats and non-Fox media.

The sister channel Fox Business Network last Friday shelved a prime-time program hosted by Trish Regan, days after she suggested criticism directed at Trump for his coronavirus response was “yet another attempt to impeach the president.”

Tucker Carlson, the first of Fox News’ three prime-time personalities, stood out last week with his calls to Americans to treat the coronavirus seriously. On Monday’s show, Carlson said that protecting the jobs of Americans should be the government’s top priority.

Hannity, Trump’s top media ally and cable news’ most popular host, last week told his viewers that while the coronavirus is a serious matter that poses risks and challenges, it’s not “the end of days. It’s not the end of the world.”

“I don’t like that we are scaring people unnecessarily,” he said.

He has frequently drawn comparisons between the new coronavirus and the seasonal death rate for the common flu and, last Tuesday, to street violence.

“To put it in perspective, 26 people were shot in Chicago alone over the weekend,” he said. “I doubt you heard about it. You notice there’s no widespread hysteria about violence in Chicago.”

At one point when Hannity introduced statistics on how many people died of the flu, he was scolded by Dr. Anthony Fauci, director of the National Institute of Allergy and Infectious Diseases. Fauci, a guest on the show, told Hannity to make sure that people understand that coronavirus is more lethal than the flu. There’s also a vaccine for the flu, and not for the new strain of coronavirus.

Similarly, Oz applied the brakes last week when Hannity said that the odds of people dying from coronavirus were negligible unless they were elderly or had a preexisting condition.

The doctor said: “The risk of dying is unclear because we haven’t been able to study it in this country.”

While Hannity mentioned the flu again on Monday’s show, he also noted that the coronavirus death rate was higher.

Most people who get coronavirus have only mild or moderate symptoms. For some, especially older adults and people with existing health problems, it can cause more severe illness, including pneumonia. The vast majority of people recover.

Both Hannity and Ingraham praised Trump this week for his decisions to restrict travel to the United States from China and Europe.

“We can say tonight without a doubt, the president’s China and European travel ban I predict will go down as the single most consequential decision in history,” Hannity said. “That’s not political. It bought us time. It bought the hospitals time to prepare.”

While attacking the “media mob” for criticizing Trump, Hannity also cited a Breitbart News report that suggested Democrats were not paying enough attention to coronavirus in its early stages because they were preoccupied with the president’s impeachment trial.

“The media, some have been enjoying this moment that has brought great inconvenience, disruption and suffering to American workers and American families, let alone all the health challenges, the deaths and the infection rates,” Ingraham said. “Because some people think it is Trump’s downfall and they’re cheering it on.”

All of Fox’s prime-time hosts have emphasized the virus’ origin, calling it the “China coronavirus” or the “Wuhan virus.”

“Let’s not forget where it came from,” Ingraham said

She has also questioned the restriction of movements of people who were not in “hot spots” of infection. “That’s panic and that’s hurting the market,” she said.

On Monday, she urged Americans to heed warnings but also not to accept the current situation as “the new normal.”

“If we don’t learn the right long-term lessons, well, we can just face a recurring cycle of misery and shutdowns if something happens that is bad in another country,” she said. She called for fewer imports of products from China, and tighter security and medical screening at the nation’s borders.

Hannity on Monday had California Rep. Devin Nunes as a guest. He attacked the “media freaks” who criticized his comments on the Fox Business Network where he suggested people should go to restaurants — which are now closed to diners in many parts of the country.

Nunes told Hannity that he was suggesting people get take-out food at restaurants, although that wasn’t apparent a day earlier.