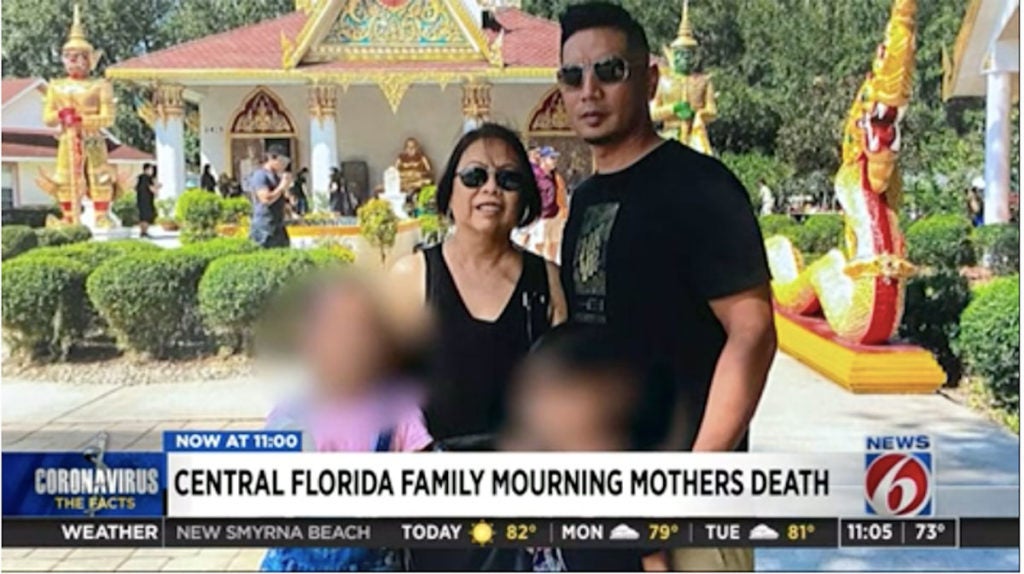 The Filipina in the photo became the first fatality of the coronavirus in Los Angeles County while on vacation. SCREENGRAB/WKMG

ORLANDO, Florida – A Filipina from Orlando became the first coronavirus fatality in Los Angeles County, where she was visiting relatives after a trip to Thailand, the Philippines and long layover in South Korea.

Using only his first name, Rem, out of fear of how the community could react, the victim’s son told WKMG/News 6 that his mother and father left Orlando in February for the trip to Thailand and the Philippies to kick off their retirement.

They had a long layover in South Korea before arriving in Los Angeles on March 8 to visit family. Rem got a text message from his father saying his mom “didn’t have a pulse, and I had to give her CPR.” She had to be taken by ambulance to a hospital.

Rem said his mother died just 36 hours after landing at Los Angeles International Airport and just eight hours after being admitted to the hospital.

His father is now grieving his wife’s sudden death alone, having been quarantined in Southern California after developing a fever and other symptoms.

But Rem claims the Los Angeles County Department of Health is not testing his father for COVID-19.

“They wouldn’t do the testing unless he was in critical condition,” he said. “It was mind blowing. I’m like wait, you’re asking us to take a chance and wait for him to get bad before he gets a test.”

His family appealed the decision, and they are waiting for a response.

News 6 contacted the department to find out why his father had not been tested, but it has not received a response.