First new virus case found among US evacuees from China 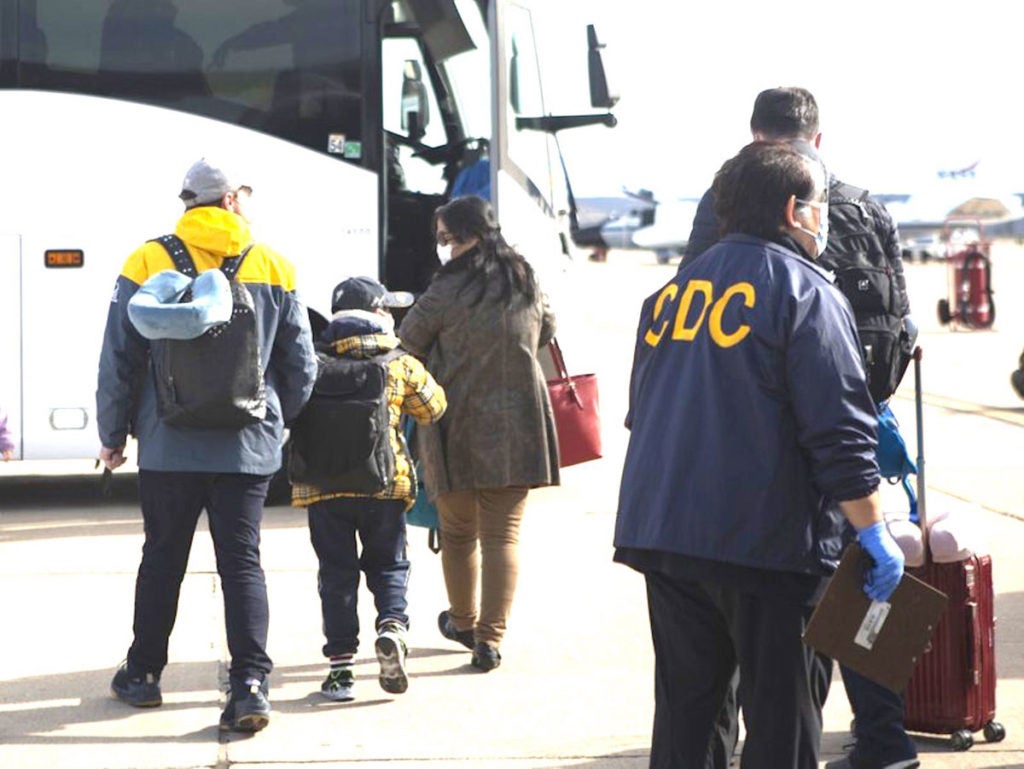 File photo provided by the U.S. Department of Health and Human Services shows evacuees from China arriving at Marine Corps Air Station in Miramar, California. An evacuee from China has tested positive for the coronavirus and has been isolated at a San Diego hospital, a person with direct knowledge of the matter tells The Associated Press, Monday, Feb. 10, 2020. (Krysten I. Houk/U.S. Department of Health and Human Services via AP)

SAN DIEGO – The first confirmed case of the novel coronavirus has been found among hundreds of people who were evacuated from China to military bases in the United States.

UC San Diego Health says a person who landed at Marine Air Base Miramar in San Diego last week had been hospitalized with symptoms but sent back to the base after testing negative. On Monday, however, the person returned to hospital isolation after federal officials said the person failed further testing.

It’s the first confirmed case among evacuees quarantined at U.S. bases. Overall, there have been 13 confirmed cases in the U.S., including seven in California.

Miramar received two flights and more than 170 evacuees last week. Seven that had shown possible symptoms of the highly contagious virus were hospitalized for observation but several tested negative and have been released.

Hundreds of American evacuees from China have been quarantined at military bases around the country until it’s determined that they don’t have the virus.

Authorities say the quarantine ends Tuesday for nearly 200 evacuees held at March Air Reserve Base in Riverside County, California. None have tested positive for the novel coronavirus.

Meanwhile, China’s daily death toll from the virus topped 100 for the first time and pushed the total past 1,000 dead. Newly confirmed cases fell slightly to 2,478, bringing the total to 42,638 on the mainland, some of whom have since been cured and released from hospital.

The updated figures come after leader Xi Jinping visited a community health center to rally public morale amid little sign the contagion is abating. Xi was featured in state media expressing confidence in the “war against the disease.”

Authorities in Hong Kong evacuated an apartment block after two cases among its residents raised suspicion the virus may be spreading through plumbing.

Despite the official end of the extended Lunar New Year holiday, many people remain at home, with around 60 million people under virtual quarantine. Public health authorities are watching closely to see whether workers returning to cities and business resuming worsens the spread of the virus.

The World Health Organization has convened a group of experts to fast-track promising tests, drugs and vaccines to help slow the outbreak of the virus, which was identified late last year in China.

WHO said there were still many unanswered but critical questions about the virus. Those include what animals it came from, how it’s spread among people and how best to treat patients.

Experts say it could be months or even years before any approved treatments or vaccines are developed.

In Britain, officials declared the new coronavirus a “serious and imminent threat to public health” after five British tourists contracted it at a ski resort in the French Alps. The case has illustrated how the ease of international travel is complicating global efforts to track and contain the new virus.

A middle-aged businessman from England is believed to have picked up the virus during a conference at a Singapore hotel. From the hotel, to the ski resort and a pub in his hometown, as well as the flights he took back to Britain, the man may have come in contact with dozens of other people.