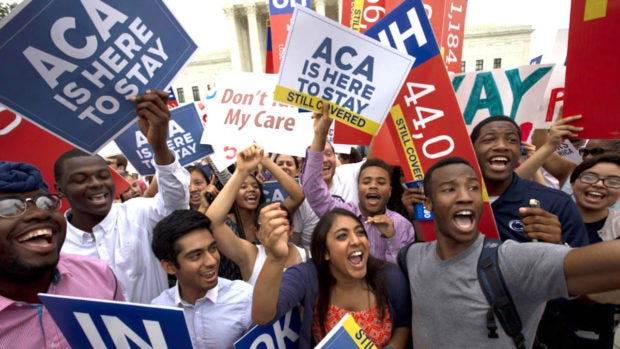 Student demonstrators cheered in 2015 outside the Supreme Court after learning that the high court had upheld the Affordable Care Act as law of the land. But Republican foes of the federal health law are still working to have it struck down. AP PHOTO

You’re forgiven if in the holiday rush you missed the news last month that a federal appeals court in New Orleans once again put the future of the Affordable Care Act in doubt and ordered a lower court to review its fate. Or if you missed the news last week that a group of Democratic state attorneys general have asked the Supreme Court to hear the case — in this term, which ends in June. That would mean a decision could come right in the middle of the 2020 presidential and congressional campaigns.

It is not at all clear that the high court will take the case at this point, although it did seek a response from Republican attorneys general, the plaintiffs in the case, by Friday. The court does not generally accept cases that come to it before lower-court rulings are complete.

However, Nicholas Bagley, a University of Michigan law professor, wrote that the four liberals on the court may opt to roll the dice because they “can probably count on Chief Justice John Roberts, who has twice turned back more substantial challenges to the law and is unlikely to embrace a lawsuit as

Still, while it takes only four votes for the court to hear a case, it takes five to hear it on an expedited basis. That would mean the liberal justices would have to entice Roberts or another conservative to hear it this term.

The stakes could not be higher. Republicans, who originally rode their spirited criticism of President Barack Obama’s signature health law to take control of Congress, suffered serious election defeats in 2018. The Democrats campaigned on fears that people with chronic medical issues might not be able to get coverage or those who gained Medicaid eligibility could lose it if Republicans prevailed.

Republicans are unlikely to want another fight about preexisting conditions and other popular provisions of the health law just weeks before the next election. Recent polling shows that some of the major provisions of the law are highly popular, even among Republicans.

But there are pitfalls for Democrats. They risk the court overturning the law, or creating the impression that they are trying to gin up a campaign issue.

What happens next will affect both politics and policy in a major way.

Democrats seem confident they want the case heard now. “Every day that Republicans’ anti-health care lawsuit is allowed to endure is a day that American families will be forced to live in uncertainty and fear,” House Speaker Nancy Pelosi said in a statement last week. “Unless the Supreme Court acts, families will continue to face needless disruption in their coverage and premiums, states will be unable to plan for the future and protections for people with pre-existing conditions will remain in peril.”

And Republicans are content with the appeals court decision. “The individual mandate is the centerpiece of Obamacare, and I am glad the Fifth Circuit recognized that it is unlawful,” said Texas Attorney General Ken Paxton, who helped bring the original suit. He added, “Finally being rid of this law will be a victory for all Americans.”

But let’s back up a minute. How can the ACA once again come before the Supreme Court? Didn’t the court uphold it in 2012? And again in 2015?

Yes and yes. Yet that didn’t stop the Republican campaign to disable the law.

In 2017, after Republicans had captured the House, Senate and White House, Congress rather famously failed to “repeal and replace” Obama’s signature health law. But they did, as part of the year-end tax bill, abolish the ACA’s tax penalty for not having health insurance.

Early in 2018, a group of Republican state attorneys general got an idea, in the words of one of them, “to rev up the base” for that year’s midterm elections. If the 2012 Supreme Court ruling upholding the law found it constitutional because the provision requiring people to have coverage was based on Congress’ ability to impose a tax penalty, then wouldn’t eliminating the penalty render the entire rest of the law unconstitutional?

The argument was dismissed by many legal scholars. But U.S. District Judge Reed O’Connor in Fort Worth, Texas, shocked legal and health policy circles in December 2018 when he ruled that the entire law should be struck down. He said zeroing out the penalty rendered unconstitutional the provisions most closely related to the penalty — those requiring insurers to sell to everyone at the same price, even if they had preexisting health conditions.

The Democratic attorneys general appealed (joined by the now Democratic-led House of Representatives).

And the Trump administration changed its position. Originally it argued that eliminating the penalty should invalidate only the preexisting condition provisions. But last March, the Justice Department announced it was advocating for the entire law to be struck down.

The three-judge appeals court panel heard the case in July.

When the decision was released in December, two judges agreed that, without the penalty, the remaining “individual mandate” was unconstitutional. But rather than explicitly agree or disagree with the lower-court ruling about the fate of the remainder of the enormous health law, the majority opted to send the case back to the lower court “to employ a finer-toothed comb” regarding which parts of the law should be allowed to continue and which would need to go.

That, of course, could take at least another year, possibly more. So, the Democrats defending the law decided to seek Supreme Court review now.

“We’re asking the Supreme Court to swiftly resolve this repeal lawsuit for the sake of saving lives and ending uncertainty in our healthcare system,” said a statement from California Attorney General Xavier Becerra, who is leading the coalition.

In the meantime, the issue of health care, already top of mind for many voters, could become bigger regardless of what happens. The irony is that the best-case scenario politically for each party is what it does not actually want — because the loser in major court cases often gets the biggest political bounce by energizing an angry base. For the Democrats, that would likely occur if the health law were struck down, while the Republicans could benefit if the law were upheld.

The Supreme Court’s decision on whether to take the case this term could come in the next few weeks.

HealthBent, a regular feature of Kaiser Health News, offers insight and analysis of policies and politics from KHN’s chief Washington correspondent, Julie Rovner, who has covered health care for more than 30 years.