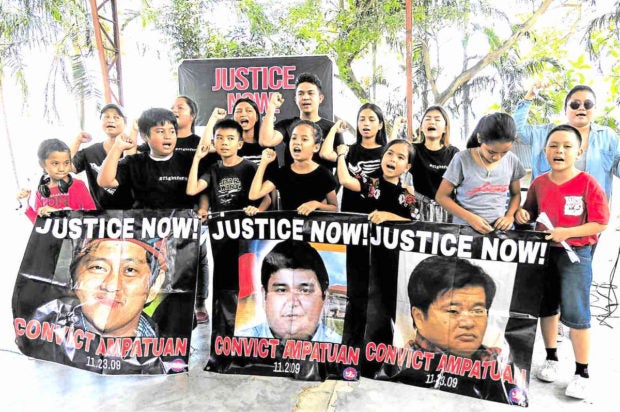 Children of slain media workers mark the 10th anniversary of the Maguindanao massacre with a visit to the site of the killings on Nov. 17. INQUIRER FILE

For Filipinos seeking justice around the world, here’s an odd coincidence.

On the day a Filipino court declared Datu Andal Ampatuan Jr.  guilty of murder in the infamous Maguindanao Massacre of 2009, Donald J. Trump was impeached in the U.S.

The Maguinadanao Massacre that took place Nov. 23, 2009 saw 58 people killed in the town of Ampatuan. The victims were the wife and sister of politician Ismael Mangudadatu and 30 journalists.

Mangudadatu, who survived, was a threat to the Ampatuans. And the killings rocked politics in the Philippines, forced martial law in the region. It also exposed how the Philippines is plagued by a ruling class that strongarms support with private armies and militias.

And even in the U.S., Filipino communities held protests and masses decrying the massacre.

With the guilty verdict and life sentences handed out to Ampatuan and a handful of relatives and accomplices, there is sign that the rule of law is still strong and that the democratic values in the Philippines are not completely eroded.

There are still others in the Maguindanao Massacre who are at large. So, justice is incomplete.

But there is a sense of hope not just in that region, but throughout the Philippines were politics by the gun from the very top, and human rights abuses remain open sores. They’re getting it right in the Philippines, slowly.

Just like we’re still trying to get it right in the U.S., where the day’s other shock wave hit.

Right now, Donald Trump is no longer merely POTUS. He’s been christened by the actions of our U.S. House of Representatives as TIP or T-I-P.

TIP? Yes, “The Impeached President.” It hurts even saying the phrase.

There have only been three in the 243-year history of our country. That’s nothing to gloat about.

As Nancy Pelosi has said, no one comes to Washington to serve in Congress to impeach a president. Yet now that it’s been done, I think it’s helpful to define what we call the guy going forward–besides a few choice nouns and adjectives you should keep to yourself.

Instead, I want to lead us in a show of compassion and respect for the president by throwing him an acronymic fig leaf. Three letters. T-I-P.

Instead of names like “45 (with an asterisk)” or something else you may have heard, let’s give him a designation. He’s Donald J. Trump, T.I.P. The Impeached President.

Just TIP. One hell of a credential. “The Impeached President.” 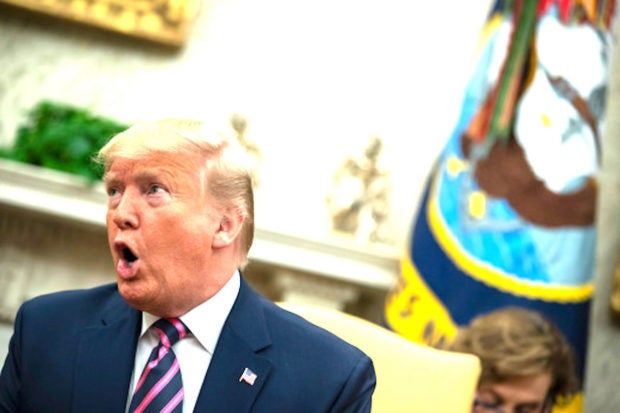 TIP is definitely not RIP. Or VIP. TIP honors the office while still acknowledging the infraction.  It’s both discreet and a visually descriptive metaphor too. Cow-tipping is an ag college frat boy prank. In DC, when you get too big and full of yourself for the Constitution, president-tipping is the last resort of the majority of the House of Representatives.

As House Speaker Pelosi said, “It is tragic that the president’s reckless actions made impeachment necessary. He gave us no choice.”

Let’s see if it sticks. Because the blemish of impeachment always does. It’s like getting permanent orange hair dye that never fades. Impeachment stains Trump forever.

Even if Trump doesn’t go away immediately, or is allowed to stay by a rigged jury process that Sen. Mitch McConnell and his ilk are trying to cook up with the help of the president’s legal staff, Trump is still tippy.

It’s the constitutional crisis we couldn’t have predicted.

If Tippy’s still there, voters can give him the real nudge in November.

But the vote that matters for now is the one taken by the House on Wednesday night.

The House vote
The Republicans were in lockstep, going down with the president–216 votes were required. The Democrats got more than they needed.

On the first article, 230 voted yes, and 197 voted no, with 1 voting present, Democrat Tulsi Gabbard of Hawaii.

It provided a clear majority to impeach Donald J. Trump on the first article of impeachment, abuse of power.

On the second article of impeachment, obstruction of Congress, the vote was 229 yes, 198 no.

Again, one member voted “present,” Hawaii’s Tulsi Gabbard, who explained to a reporter that she was against Trump’s actions, but she wasn’t for an impeachment process that was not bipartisan.

I had hoped to see some crossover votes of conscience, but it didn’t materialize.

Instead of looking at whether Trump honored his oath of office, or protected and defended the Constitution, we had a Republican party that threw principles out the window and chose to be loyal to an all-powerful, above-it-all Trump.

For political self-preservation? Where was the courage to say Trump had done something wrong in the Ukraine matter and should be punished?

While the Democrats looked at the facts, Republicans looked at preserving their jobs and power.

The Republicans stayed locked in with Donald J. Trump, TIP, the man who seemed to come undone at his rally in Michigan as the House was considering the articles of impeachment. He’s the man who wrote that crazy letter to Speaker Nancy Pelosi on Tuesday, proving that you can string together random tweets to look like a legal document on White House letterhead.

Republicans pledged allegiance to that man with their votes.

That’s not good for our democracy.

Note to the Philippines: When the U.S. gave you the model for democracy, if those of us here are trying to get it right.

If you watched any of the hours upon hours of hearings during the last few weeks, the party line vote wasn’t much of a surprise.

The final House debate on Wednesday was like a repeat of all the refrains that had been heard before.

But this is why the focus was kept on Ukraine, so it would be compact and understandable. Why not bribery? What about Mueller’s report? This was intended to be simple. All the House had to prove was “high crimes and misdemeanors,” crimes against the Constitution.

So at the start of the debate were Asian Americans, like California’s Ted Lieu  and Washington state’s Pramila Jayapal, who again said Trump himself was “the smoking gun.”

“This is the day of accountability and defending our democracy,” she said. “The facts in front of us are clear. This President Donald J. Trump coerced a fragile foreign ally (Ukraine) to investigate his political opponent (Joe Biden) and interfere in our elections. And he leveraged critically needed congressionally approved military aid to Ukraine.”

The president was using his office for personal gain. The abuse of power was clear.

Republicans never disputed the facts in article one. The president said it was a “perfect” call, and Republicans nodded. And they failed to mention that Trump, unlike any president before him, failed to cooperate with Congress’ investigation, preventing witnesses from appearing and withholding needed documents.

This, of course, proved the second article of impeachment, obstruction of Congress.

In the six hours of floor debate on Wednesday, there were some histrionics at the end. But I found the most effective were the shortest and bluntest speeches.

Susan Davis (D-CA): “Make no mistake, we are not impeaching a president. He is impeaching himself. If you are the president and you obstruct justice, try to bribe a foreign leader and threaten national security, you’re going to get impeached. End of story.”

Bill Johnson (R-Ohio) was effective just by having a moment of silence for “Disenfranchising the 63 million who voted for Donald Trump.”

It was more effective and notable because during a contentious six-hour floor debate, it got everybody to shut up for once.

Calling impeachment the undoing of the 2016 election, or the Democrat’s coup were popular lines of defense for Trump Republicans, who believed the proceedings were a sham. It was anything but.

It was just an historic day in our democracy.

A president who committed a crime against the Constitution was caught red-handed. And then Congress did its job and protected the rule of law, by providing a major check on the executive branch.

Wednesday, December 18, 2019 is a serious and somber moment. As historic a moment as any patriotic event in our history.

The president was stopped from becoming an unabashed strongman, prone to corruption.

Until the Senate acts he remains with us. Disgraced? Dishonored?

Emil Guillermo is a journalist and commentator. He writes a column for the North American bureau. Twitter @emilamok Find him on Apple Podcasts.