Virtual reality makes splash, but not ready for prime time 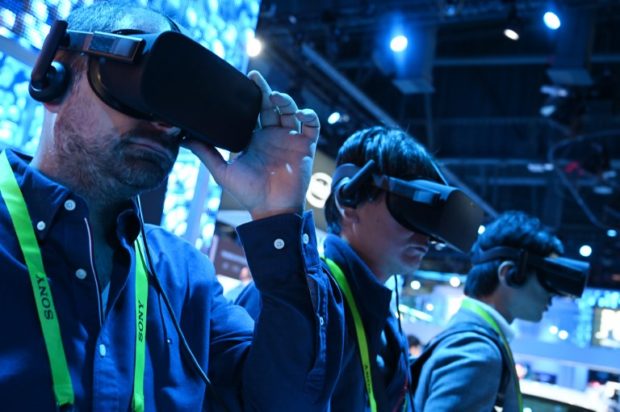 LAS VEGAS, United States — Virtual reality showed off its spectacular side at the Consumer Electronics Show this week, whisking people onto hockey arenas, baseball fields and even into the internet with animated film trouble-maker “Wreck-it Ralph.”

But even with the impressive visuals, VR appeared to be in the slow lane toward mass adoption, according to analysts and industry attendees at the massive technology trade show.

“We see the gap between how people are using VR and how they use their other computing devices, and we are working really hard to solve for those things so we can really bring it to mass market adoption.”

HTC packed a casino ballroom with virtual reality experiences, some of which showed off eye-tracking capabilities newly built into Vive.

“Home Run Derby” created by US Major League Baseball let people step up to a virtual home plate and hit balls out of a digital park.

Fidelity Investments let people step into financial portfolios, entering a digital world where share prices were all around.

While O’Brien wouldn’t specify figures, he said Vive sales were steadily growing, with interest heating up for business or professional use.

“It’s not mainstream, and it shouldn’t be mainstream this year,” O’Brien said.

Companies are finding efficiencies and cost savings in using virtual reality gear for tasks such as training workers or designing products.

A delivery truck driver crash in virtual reality, for example, is harmless compared to what might happen in the real world.

“There will be a significant number of people who are introduced to VR in either an arcade or an office,” O’Brien said.

The Void VR system offers arcade-style experiences in several countries, overlaying virtual worlds on real rooms to let people move about as they might if really in the fantasy.

Sense Arena set up a VR hockey rink where people tried to send pucks past a virtual goalie.

VR was also being used for medical treatment and diagnostics such as managing pain or diagnosing brain impairments, and to allow senior citizens to “travel” to far-flung destinations.

Startups touted accessories from foot gear for moving through virtual settings to a Teslasuit that let wearers feel what happens in faux environs.

“So, if you are playing ‘Red Dead Redemption 2’ and someone punches you in the gut, you are going to feel it in your stomach,” Consumer Technology Association senior director Ben Arnold quipped in reference to Teslasuit.

Most of the VR offerings on the show floor were aimed at gamers, notorious early adopters of tech the provides intense play.

The fact that there was a virtual and augmented realities section on the CES show floor is a promising sign, according to Gartner principal analyst Tuong Nguyen.

“People have been waiting a long time for this,” Nguyen said.

Despite high expectations, more time is needed for VR hardware and software to become untethered, simple, and magically immersive, according to the analyst.

Facebook this year is to release an Oculus Quest VR headset with power to handle the intensive graphics of digital worlds without being plugged into a computer.

VR gear remains pricey, especially considering it is limited mostly to gaming, so is a tough sell for the mass market, according to Nguyen.

And, the analyst noted, graphics lags in VR can make some people nauseous.

Ari Grobman, chief executive of Israeli optics specialty firm Lumus, foresaw the coming of glasses that can overlay digital data on the world around a wearer, but convert as desired for VR experiences.