Soldiers aboard helicopters and in armored personnel carriers (APCs) battled Islamist militants inside a southern city on Thursday, as reports emerged of the gunmen murdering civilians.

An initial rampage by the gunmen, who have pledged allegiance to the Islamic State of Iraq and Syria (ISIS) group, through the mainly Muslim city of Marawi on Tuesday prompted President Rodrigo Duterte to impose martial law across the southern third of the Philippines.

Authorities said ending the crisis was proving extremely hard because the militants were holed up in residential buildings, had planted improvised bombs in the streets and had taken Catholic hostages.

“People are afraid. They do not want to open establishments. Offices are closed. We do not want people to be used as human shields,” Marawi mayor Majul Usman Gandamra said.

Two military helicopters flew above Marawi and APCs churned through its streets as automatic rifle firing could be heard on Thursday, according to an AFP photographer in the city.

Marawi has about 200,000 residents but many of them have fled because of the fighting.

Five soldiers and one policemen died in the clashes, while 13 gunmen were killed, according to the military.

READ: Slain policeman hailed a hero in Marawi, honored by kin in Baguio

Authorities have not reported any civilian casualties but the GMA television network showed images of nine people who had apparently been shot dead. The victims had their hands tied together.

They were captured at a roadside checkpoint and murdered by the militants after being identified as Christians, according to the GMA reporter, citing a witness.

Duterte said on Wednesday one policeman was similarly caught at a checkpoint set up by the militants and beheaded.

There are between 50 and 100 gunmen, according to various military officials. 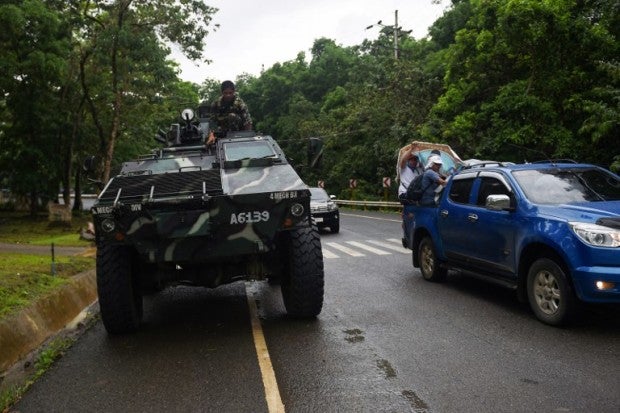 A Philippine soldier sits on an Armoured Personnel Carrier (APC) while residents fleeing from Marawi city drive past on a highway going to Marawi, in Balo-i town, in southern island of Mindanao on May 24, 2017.
Islamist militants who triggered martial law in the southern Philippines when they rampaged through a city are threatening to kill a priest and other hostages, the Catholic Church said May 24. / AFP PHOTO / TED ALJIBE

The militants are also holding between 12 and 15 Catholic hostages abducted from a church, according to the local bishop, Edwin Dela Pena.

The fighting erupted on Tuesday after security forces raided a house where they believed Isnilon Hapilon, a leader of the infamous Abu Sayyaf kidnap-for-ransom gang and Philippine head of IS, was hiding.

The United States regards Hapilon as one of the world’s most dangerous terrorists, offering a bounty of $5 million for his capture.

However the raid went spectacularly wrong as dozens of gunmen emerged to repel the security forces, then went on a rampage across the city while flying black IS flags.

The militants raided two jails, leading to the escape of more than 100 inmates, according to Mujiv Hataman, the governor of a Muslim self-rule area that includes Marawi.

They also set fire to many buildings, including a church and a university. CBB/rga