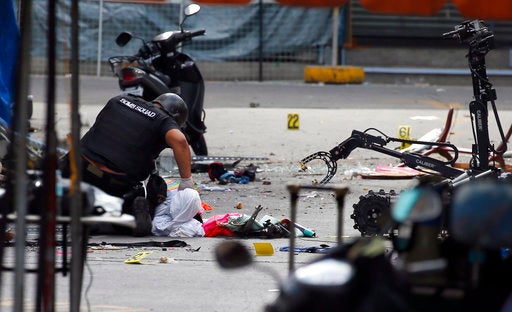 A member of the Philippine National Police Bomb Squad checks the items which were retrieved by a remote-controlled robot, right, following two overnight explosions in Manila’s Quiapo district, Philippines Sunday, May 7, 2017. Police are still investigating the explosions at the area where another explosion occurred during the ASEAN summit last weekend that wounded close to a dozen people. (AP Photo/Bullit Marquez)

The Philippine  National Police say a bomb explosion that killed two people in a Muslim community in Manila was sparked by a personal feud, but the Islamic State group says its fighters were responsible.

Police say a package being delivered by a man exploded late Saturday in downtown Manila’s Quiapo district, killing him and another man receiving the package at a Shiite center. Police say four others were wounded.

Authorities say another explosive went off more than two hours later near the scene of the first explosion and wounded two policemen deployed to help secure the area and investigate the bombing.

The IS group claimed its fighters killed “five Shiites” in a bombing in Manila.