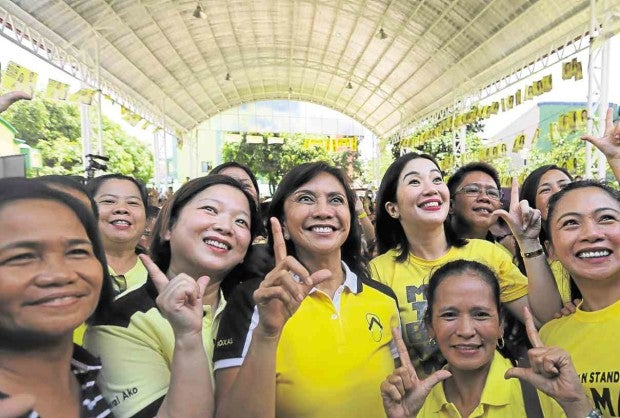 Vice President Leni Robredo (center), seen in the photo with supporters of the Liberal Party, resigned from the Duterte Cabinet after she was stopped from attending meetings over ‘irreconcilable differences’ with policies of the administration. RAFFY LERMA

Ousting anti-death penalty lawmakers from their key posts in the House of Representatives was a “disturbing indicator of a dangerous slide toward authoritarianism,” the Liberal Party (LP) warned on Thursday.

“The Liberal Party is concerned; kicking out the “No” voters from House leadership positions betrays the administration’s intolerance to dissent, a disturbing indicator of a dangerous slide toward authoritarianism,” it said in a statement.

“The Speaker’s action is divisive and detrimental to the character of Congress as an independent and deliberative institution. In a democracy, dissent must be met with thoughtful reasoning, not political retribution,” the group said, referring to Speaker Pantaleon Alvarez.

In Congress, positions, such as committee chairmanships, are usually given to lawmakers who follow the majority decision.

Alvarez has warned that House members who would vote against the death penalty would be stripped of their posts. On Wednesday, the House leadership ousted a dozen of its members who voted “No” to the re-imposition of capital punishment.

Among those ousted was Pampanga Rep. Gloria Macapagal-Arroyo, who lost her position as deputy speaker.

But the LP said it was no longer surprised by the House leadership’s action against members who take a stand against the administration’s agenda.

It cited Vice President Leni Robredo’s resignation from the Cabinet after she was stopped from attending meetings amid “irreconcilable differences” with administration policies.

The party noted how Senator Leila de Lima ended up in jail for being vocal against President Rodrigo Duterte.

While the LP appeared to link politics to the detention of De Lima, the senator was actually ordered arrested by the Muntinlupa Regional Trial Court over drug charges.

Robredo and De Lima are members of the Liberal Party.

“And now this: the ouster of members of Congress for voting “No” to the Death Penalty Bill after the measure’s approval on third and final reading last Tuesday, March 7. The Liberal Party is not surprised,” the group said.

The LP said it was not only “deeply saddened” by the approval but it was also disappointed by the “suppression of arguments” when only seven of the 25 congressmen who lined up to interpellate the bill were allowed to debate with its proponents.

“As with the media that normally gives a new President a honeymoon period, the Liberal Party tried to give this administration multi-partisan support. But uniting behind it appears to have become more and more untenable because we are unable to support and defend a number of its policies, including its failure to address the thousands of extra-judicial killings among others,” it said.