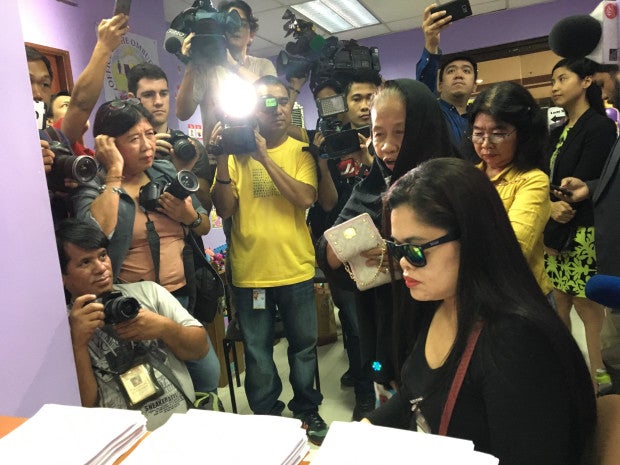 Maria Belen Daa (in veil), Lydia Gabo (in yellow), and Marilyn Malimban (with shades), who all lost their relatives to a purported drug raid last August 21, corroborate the March 2 statement of a lone survivor that police abuses attended the operation. They filed their affidavits on Mar. 16, 2017 at the Office of the Ombudsman. (PHOTO BY VINCE NONATO / INQUIRER)

MANILA — Despite what their lawyer described as “continuing intimidation,” three women who lost their relatives to a purported drug operation in August have joined the lone survivor in suing four Quezon City policemen and their informants.

The testimonies filed by Maria Belen Daa, Marilyn Malimban, and Lydia Gabo at the Office of the Ombudsman on Thursday served to corroborate the March 2 complaint-affidavit of Efren Morilo.

Daa is the mother of slain suspect Marcelo “Nonoy” Daa Jr., whose house was the scene of  alleged “execution-style” killings at Payatas, Quezon City, on August 21, 2016. Gabo is the mother of Rhaffy Gabo, while Malimban is the live-in partner of Jessie Cule.

Their counsel, Center for International Law executive director Romel Bagares, said the family of a fourth victim, Anthony Comendo, did not want to pursue a case anymore “out of fear.”

Despite the families becoming the first to secure a protection order from the Court of Appeals on Feb. 10, Bagares said: “Actually, we think that there’s still intimidation going on.”

He said his fellow legal counsels reported that “just the other day, two dead bodies were disposed (of)” near Daa’s house–something he said was “like a veiled threat against our clients.”

Still, Bagares said the families of the slain suspects have not lost their resolve. “They are here to seek justice for their loved ones,” he told Ombudsman reporters.

The three drug suspects  Marcelo “Nonoy” Daa Jr., Rhaffy Gabo, Jessie Cule, were allegedly killed in separate police operations under the so-called Oplan Tokhang, a door-to-door campaign of the Philippine National Police to “persuade” known drug pushers and users in the community to surrender to the police and undergo rehabilitation.  SFM