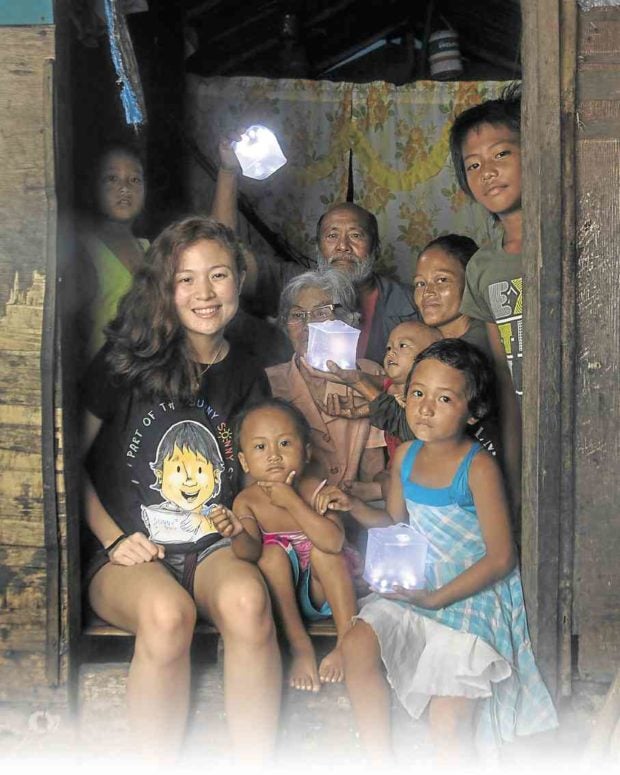 A YOUTH volunteer of One Million Lights-Philippines (OML-PH) joins a family in an impoverished coastal village of Sta. Cruz town, Zambales province that received solar-powered lanterns courtesy of the group OML-PH. CONTRIBUTED PHOTO

STA. CRUZ, Zambales—When the sun sets and the night begins, Michelle Menor would bring out a kerosene lamp to light up their home in the coastal village of Naulo here.

The 28-year-old wife of a fisherman said the yellowish and flickering flame illuminated the rooms when their family ate dinner or when their children sat down to do their homework.

“But it’s not every night that we have a kerosene lamp. At times, we do not have money to buy kerosene so we just let the evening pass without any light,” Menor said.

Menor and her four children would also be left in total darkness when her husband, Roel, 29, sets out to fish at night. “My husband has to bring with him our kerosene lamp because he also needs it for night fishing. He uses it at his boat to attract fish,” she said.

Ruby Mas, 29, a resident of the neighboring coastal village of Malabago shares the same plight.

Mas and her family have relied on an oil lamp and a flashlight at night for several years now.

“We can’t afford to pay for electricity. It’s a daily struggle to do chores at night,” Mas said.

“I know it’s not safe to use [oil lamps] because it may start a fire but it is what has been available,” she said.

So Menor and Mas brightened up when a group of youngsters handed out free solar lamps this month to 100 villagers in three remote and coastal communities here.

The young volunteers, mostly in their early 20’s, were from the One Million Lights Philippines (OML-PH). They spent their weekend (from Sept. 17 to 18) distributing solar lanterns to the households.

OML-PH is run by a core group of five young adults. It has a nationwide base of about 200 youth volunteers.

The group partnered with Sunny Sonny Story, which manufactures solar lanterns that are made of inflatable, waterproof, shatterproof and child-friendly PVC materials.

The lantern, which is slightly bigger than a coffee mug and weights 105 grams, can last for up to 8 hours, after charging under the sun for 6 to 8 hours, said Sergio Boero who designed the lanterns.

Fulfillment
Sean Angsanto, a 21-year-old OML-PH member, said it was fulfilling to see smiles from people living in off-grid communities.

He said: “We’re doing this to help improve the lives of indigent families. We’d like to make a difference at our young age … There’s a sense of fulfillment in knowing that children can now study their lessons at night with the help of these solar lanterns.”

Boero, who is also the president of the Italian Chamber of Commerce in the Philippines Inc., said the lanterns have a life span of three years.

“The Sunny Sonny solar lanterns can also be used for outdoor activities, during power outages and emergencies,” Boero said.

He said the product provides safe and affordable light to poor Filipino families.

Boero said each solar lantern can be purchased for as much as P470, but 10 percent of the profits goes to Sunny Sonny Story’s “adopt-a- light” campaign which is dedicated to indigent families.

According to Mark Lozano, OML-PH country head and founder, the group has lit up more than 50 impoverished communities in 28 provinces in the country by distributing 12,500 solar-powered lights since it was founded in 2010.
A million lights
Lozano said they wanted to provide solar-powered lights to the country’s impoverished communities that have no access to electricity.

Together with its mother organization One Million Lights, which is based in California, OML-PH intends to distribute a million units of solar-powered lanterns around the world.

The same study revealed that inhaling the fumes of a kerosene lamp for four hours is like smoking two packs of cigarettes.

Lozano said the white light emitted by a solar lantern is over 10 times brighter that the flame flickering inside a kerosene lamp.

Aside from its health risks, Lozano said kerosene lamps are relatively expensive.

A bottle of kerosene costs anywhere from P10 to P30 and lasts for about two nights.

On the average, families which rely on kerosene lamps spend a third of their income on kerosene, Lozano said.

“These solar lanterns will help these families save about 30 percent of their weekly income because they don’t have to buy kerosene anymore,” he said.