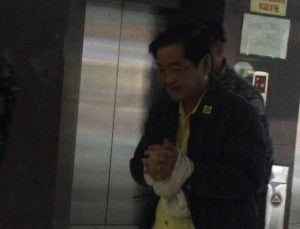 MANILA, Philippines – Former Association of Philippine Electric Cooperatives (Apec) Representative Edgar Valdez refused to enter a plea on Monday morning during his arraignment for plunder and graft over the pork barrel scam.

Following his silence, the court entered a plea of not guilty for the 64-year old former lawmaker who is detained in Camp Bagong Diwa.

Valdez is accused of pocketing at least P57.787 million in kickbacks from 2004 to 2010 in the scam where lawmakers allegedly pillaged their Priority Development Assistance Funds (PDAF) through kickbacks from ghost projects allegedly administered by businesswoman Janet Lim-Napoles.

BACK STORY: Solon indicted for plunder over pork kickbacks

Napoles, who is already facing multiple corruption charges, pleaded not guilty for plunder during the same arraignment.

Principal whistleblower Benhur Luy said payoffs for Valdez, whose codename is “kuryente,” were made in Napoles’ office in Ortigas. Valdez represents electric cooperatives in Congress.

In its indictment, the Ombudsman said Valdez endorsed his PDAF-funded projects to Napoles-controlled foundations.

“(The) PDAF of Valdez was never used for the intended projects as these were considered ‘ghost’ projects, with fabricated documents submitted for its liquidation,” the Office of the Ombudsman said.

The Ombudsman noted that “The mayors and municipal agriculturists reported that they never received anything from the office of Valdez, or from any of the project partners.”

Meanwhile, the following entered their respective pleas in their arraignment for graft:

Meanwhile, Napoles’ employee John Raymund De Asis has been at large in all his plunder cases.

Those who have yet to post bail from graft are Antonio Ortiz, Roy Bongalo, Alan Javellana, Rhodora Mendoza, Victor Cacal, Maria Ninez Guanizo, Julie Johnson, Emmanuel Sevidal, Sofia Cruz and Ofelia Ordonez. They were absent for the arraignment Monday.