Over a hundred trapped during the 2017 siege still not located, identifiedBy Divina M. Suson 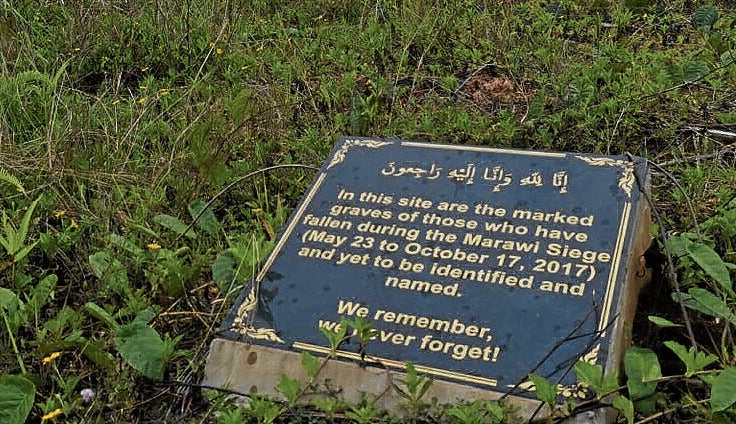 EERIE MARKER A marker eerily stands out among the shrubs that have taken over the Maqbara, a public cemetery in Marawi City where more than 300 unidentified people killed in the 2017 siege were buried. —DIVINA M. SUSON

MARAWI CITY—For 40-year-old Merlinda, who tends a sari-sari store in her hometown in Misamis Oriental, the anniversary of Marawi City’s liberation from the hands of Islamic State militants marks a continuing tragedy that can only end when she locates the remains of her husband and son.

“We have not received any update about our loved ones who were missing,” Merlinda said in Bisaya, adding that the longer she waits, the more the anxiety builds up.

Merlinda’s husband, son and daughter were among those held hostage and used as human shields by the terrorists. Her daughter also suffered sexual abuse while in captivity, until she was able to escape.

Merlinda and her family have accepted the possibility that her husband and son had died, holding on to an account by survivors that they were among those struck by a bomb on Sept. 28, 2017.

Merlinda’s husband and son were just among hundreds of Bisaya-speaking residents in Marawi trapped in the five-month siege that ended on Oct. 17 three years ago.

Her husband worked in a government construction project. During the summer break, her son and daughter joined their father to earn money doing menial jobs, like laundry, which they can save up for the school opening. The siege turned their vacation into a tragedy.

Like Merlinda, other families are also anxious for information on the fate of their kin. In 2018, the International Committee of the Red Cross said there had been over a hundred families who reported to have missing members.

“I hope that we can get the result of the DNA matching so we can have peace of mind,” said Merlinda, who had a DNA sample taken from her three years ago to match with her son.Although there were reports in 2018 about DNA samples from family members not matching that of the recovered cadavers, Merlinda said there was never any official notice sent to them.

The Department of the Interior and Local Government (DILG) led the government agencies in charge of the management of the dead and missing (MDM) throughout the length of the crisis.

According to Saripada Pacasum, Jr., former head of Lanao del Sur’s Disaster Risk Reduction and Management Office, the cadavers were buried with the code they created as identification, indicating key details like date and time of retrieval, location where they were retrieved, and a description of clothing and body marks.

“We had it written on a piece of paper, wrapped it with plastic and put it inside the cadaver bag with the body. The same details were written on a wood erected on each tomb,” Pacasum said.Today, shrubs have taken over the Maqbara, and many of the wooden markers were already damaged.

Pacasum recalled that in 2017, some of those who died might have had the chance of being identified and claimed by relatives except that many were reluctant for fear of being linked to terrorists.

Elizabeth Buna, DILG’s assistant director in Iligan City, said it was not easy to claim a cadaver during that time.

“Even if you have identified that the cadaver was your child’s, for example, you have to comply with all the papers needed, from certification from the local government, to getting an incident report from the police. It was not easy,” said Buna, who was part of the MDM committee during the siege.