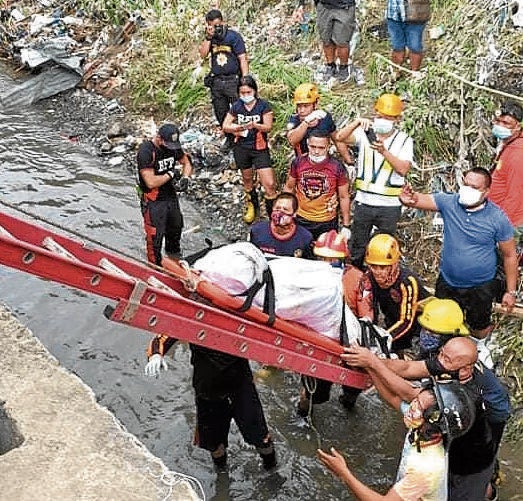 RETRIEVAL OPERATION Rescuers found the body of 14-year-old Hansel Dayundon on Thursday, two days after the boy was swept away by floodwaters in uptown Cebu City. —PHOTO COURTESY OF RAMIL AYUMAN

Labella issued the directive after the City Disaster Risk Reduction and Management Office found out that some structures did not only violate the 3-meter easement rule but have also encroached on the waterways.

The mayor said he would meet with the owners of the establishments and officials of the Department of Public Works and Highways (DPWH) to discuss the measures to prevent another flooding of greater magnitude.

The DPWH must help address the problem since companies got their construction clearance from the agency before they were allowed to construct buildings. The maintenance of creeks, he added, is also under the DPWH.

A heavy downpour spawned by a localized thunderstorm and Tropical Depression “Ofel” on Tuesday evening caused rivers in the city to overflow, with floodwater reaching up to 4 feet in some parts of the city.

The family of one of the fatalities, Hansel Dayundon, 14, said that after the boy was carried by the water, he hit his head on the foundation of a hotel that constructed its parking lot right above a river.

City Hall records showed that the hotel had a permit to construct the structure issued in the 1970s.

Labella said he also wanted to remove the shanties built within the 3-meter easement zones of rivers and creeks.

The rapid urbanization in the city has resulted in the construction of houses along the creeks, contributing considerably to the flooding problem, city officials said.

Councilor Jerry Guardo, who checked the portion of the Kamputhaw River where the boy’s body was found, said it was necessary to remove all obstructions near or in the river to avoid a repeat of what netizens called the “mango float” incident—a word play on the dessert and Mango Avenue, the former name of the heavily flooded General Maxilom Avenue.

A concrete slab underneath the hotel’s parking lot right above the river was a contributing factor why garbage had piled up in the area, he said.

Guardo, who chairs the city council’s infrastructure committee, said too much garbage in the river constricted the water’s flow and caused the flood.