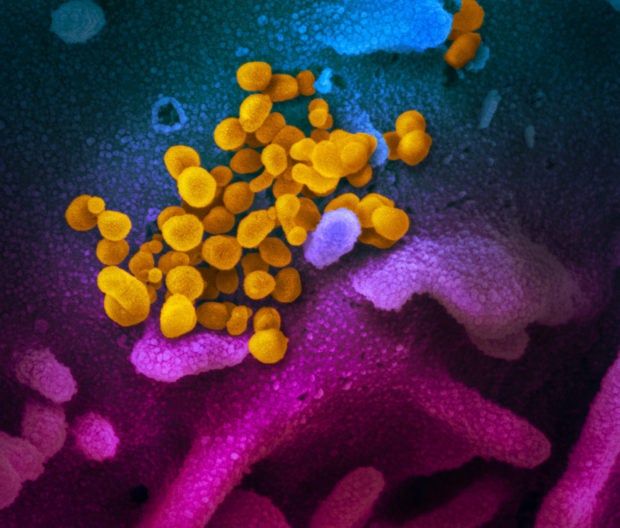 FILE PHOTO: An undated scanning electron microscope image shows SARS-CoV-2 (yellow), also known as novel coronavirus, the virus that causes COVID-19, isolated from a patient in the U.S., emerging from the surface of cells (blue/pink) cultured in the lab. NIAID-RML/Handout via REUTERS. THIS IMAGE HAS BEEN SUPPLIED BY A THIRD PARTY. MANDATORY CREDIT

BEIJING — A Chinese border city launched coronavirus tests for tens of thousands of residents on Tuesday, following two imported infections from neighboring Myanmar, barring some people from leaving homes, and ordering vehicles off the streets.

The key transit point of Ruili in southwestern Yunnan province will run tests on its 200,000 residents following Sunday’s reports of the imported cases, although no local transmission of the virus has been reported.

Yunnan’s rugged 4,000-km (2,485-mile) border with Laos, Myanmar and Vietnam makes it tough for authorities to step up surveillance and cut illegal immigration as thousands pour into China, seen as a safe haven in the global pandemic.

“All residents in downtown areas shall be quarantined at home, and are not to enter or leave without special reasons,” the Ruili city government said in a statement on Tuesday.

All businesses were to be shut, except for supermarkets, pharmacies and food markets, it added. It also banned vehicles from the streets for the duration of testing, unless delivering essential items.

Chinese embassy officials in Myanmar have held talks via teleconference with the country’s authorities to beef up joint efforts for disease control and prevention, the embassy said on its website.

Chinese officials have said areas on the Myanmar border should put the fight against the disease on a wartime footing.