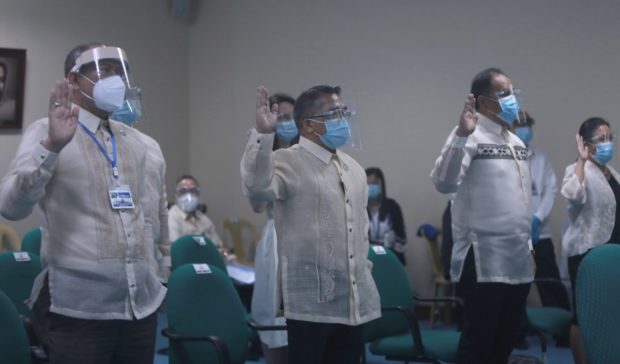 CA HYBRID MEETING: 13 officials of the Department of Foreign Affairs take their oath before the start of the hybrid meeting of the Committee on Foreign Affairs of the Commission on Appointments which will deliberate on their nomination and ad interim appointments Wednesday, September 16, 2020. (Albert Calvelo/Senate PRIB)

MANILA, Philippines — Six Philippine ambassadors have been recommended for confirmation by a panel of the Commission on Appointments Wednesday.

In a hearing, CA’s Committee on Foreign Affairs approved the nomination of Maria Amelita Cunanan Aquino, ambassador to Cambodia and Frank Revil Cimafranca, ambassador to Hungary with concurrent jurisdiction over Bosnia and Herzegovina, Bulgaria, Montenegro, Romania, Serbia and Moldova.

Last March, Lomondot’s confirmation as envoy to Kuwait was deferred because he was already set to retire in April.

Lawmakers suggested then that Lomondot should just be given the ambassador post as a political appointee after he retires.

The panel also recommended for confirmation the ad interim  appointments of the following foreign service officers: