STILL STUNNING Taal Volcano Island, nowgray and desolate after the steam-driven eruption in January, is still a sight to behold from Tagaytay City. Visitors from Metro Manila and the nearby provinces of Laguna and Batangas flock to Tagaytay to enjoy the city’s weather and its restaurants and parks. —NIÑO JESUS ORBETA

The mad rush of weekend tourists to Tagaytay City has led to stricter entry protocols in Cavite province, with out-of-towners now required to carry a travel authority when visiting areas under different quarantine levels to contain the spread of the new coronavirus disease (COVID-19).

While the Joint Task Force COVID Shield said this guideline was meant to prevent the transmission of the coronavirus, this could also slow down the reopening of local economies, like Tagaytay which recently announced that it was ready to accept visitors.

Col. Marlon Santos, Cavite provincial police director, on Tuesday said border controls, particularly between Cavite and Metro Manila, would be tightened, as the metropolis is under a stricter general community quarantine.

According to Police Lt. Gen. Guillermo Eleazar, the task force commander, a travel authority is required when visiting Tagaytay, a popular weekend destination, especially for Metro Manila residents. There is no need for such document, however, when traveling within Cavite.

A travel authority is issued by the Philippine National Police, normally for locally stranded individuals, or those returning to their hometowns after being caught in lockdown elsewhere. It requires a medical clearance, unlike the travel pass or a quarantine pass issued locally by the village or a town government.

“You need a travel authority for control because we don’t want to open the floodgate and [subject it to] abuse,” Eleazar told the Inquirer in a telephone interview on Tuesday.

Guidelines issued by the Inter-Agency Task Force for the Management of Emerging Infectious Diseases (IATF) allow authorized persons outside residence (Apor) to cross borders or go outside their provinces without a travel authority, he said.

“If you cross the provincial boundary, you should have a travel authority unless you are an Apor and your travel is work-related,” Eleazar said.

Those who wanted to visit Tagaytay for tourism purposes must secure a travel authority, he said.

But Eleazar said that if Cavite wanted to waive this requirement for tourists, it should first seek permission from the IATF.

Ariel Iglesia, director of the Department of the Interior and Local Government in Calabarzon (Cavite, Laguna, Batangas, Rizal and Quezon), said the idea of a travel authority was to screen people traveling “interzones” or from a higher-risk area, like Metro Manila, to somewhere with a lower number of infection.

He said it should not be a problem when crossing two provinces under the same quarantine level.

“Under any [quarantine] level, traveling for leisure is still discouraged,” Iglesia said.

The provinces of Cavite, Laguna and Rizal, which share boundaries with Metro Manila, have been placed under the more relaxed modified general community quarantine on Sept. 1. This allowed, for instance, the reopening of most establishments at 50-percent capacity. 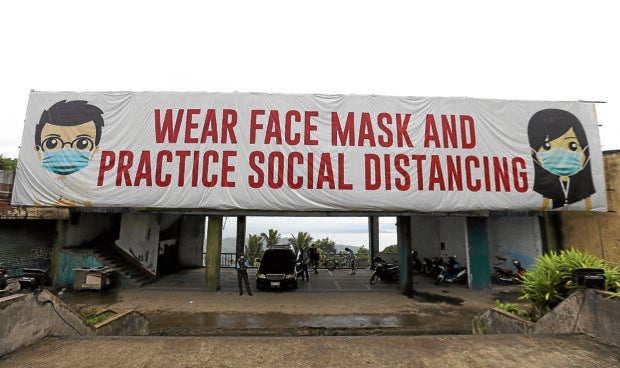 REMINDER A large tarpaulin streamer at the Tagaytay City rotunda reminds visitors and residents about health protocols to keep them safe amid the COVID-19 crisis. —LYN RILLON

Santos said authorities would inspect motorists coming from Metro Manila at Cavite’s entry points — in Bacoor City, Daang Hari and Cavite Expressway; those coming from Laguna, in Carmona and Silang; and those coming from Batangas province, in Maragondon and Alfonso towns.

For the longest time since the outbreak, Tagaytay observed strict entry rules and limited business operations by closing down parks and public amenities. The city only began to see case surges when protocols were first eased in July.

“That’s why Tagaytay [local officials] were complaining because the checking [for travel documents] should be done at the borders—not when a person is already there [in Tagaytay],” Iglesia said.

“The assumption was since you’re already in Tagaytay, you must have already been cleared at the [border] checkpoints. Anyway, I’ve asked the city police chief to also begin checking [tourists] in Tagaytay,” Santos said.

Over the weekend, thousands of tourists flocked to Tagaytay for the first time in several months. Many of them were cyclists and motorcycle riders who came from outside of Cavite and did not carry travel documents, said Lenard Lantican of the city tourism office.

The weekend coincided with the reopening of Sky Ranch, a popular theme park, which announced that it was resuming operations but only on Fridays through Sundays.

Still, Lantican and Santos said minors, the elderly and persons with comorbidities or other health problems are still not allowed in parks and restaurants.

Tagaytay has lost more than P1 billion in tourism revenue since the eruption of Taal Volcano in January. Losses continued to spill over through the COVID-19 crisis that started in mid-March.

—With a report from Nestor Corrales