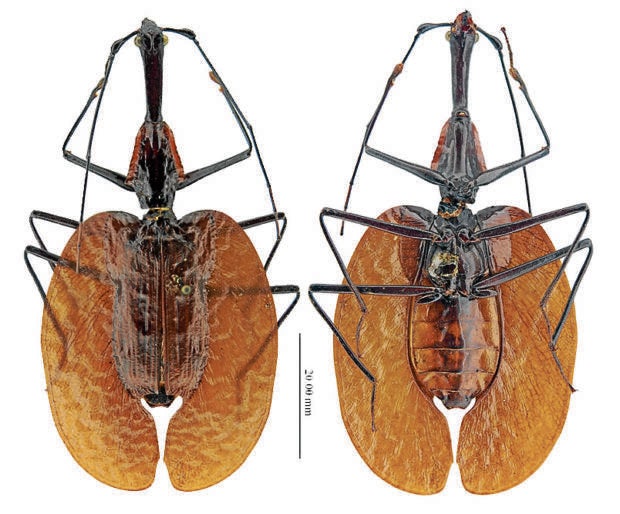 FOREST FIND Scientists found a species of the violin beetle (also known as banjo beetle) in the forests of Isabela in Basilan province in 1953 but it was only this month that they described it in scientific journals. —PHOTO COURTESY OF UPLB MUSEUM OF NATURAL HISTORY

A species of the rare violin beetle (also called banjo beetle) thriving in the forests of Basilan province has finally been documented by entomologists from the University of the Philippines Los Baños (UPLB) 67 years since it was found.

The paper marked the first time the violin beetle was traced to and reported in the Philippines, bringing “music to our ears,” said UPLB entomologist and MNH cocurator, Aimee Lyn Dupo.

In a phone interview last week, Lit said the 2.5-inch-long insect was actually “big for a [common] beetle” and most likely feeds on bracket fungi, or wild mushrooms that grow on the trees.

Its “leaf-like” shape is similar to a violin’s or a banjo’s, with a color likened to varnished wood.

The beetle produces butyric acid, a defense chemical that gives off a pungent smell, in response to attacks.

Lit said the museum specimen was collected in 1953 in Isabela, Basilan, but it was only around November last year when his team started working on its taxonomy.

He said security threats and insurgency in Basilan had prevented researchers from returning to the island that no study on the violin beetle had been conducted since 1953.

“[But] we’re hoping [the beetles still exist today] since there are still intact forests there, according to our friends from the [Department of Environment and Natural Resources],” he said.

According to Lit, they are planning to explore areas other than Basilan, like Tawi-Tawi and Zamboanga, where they believe the beetle also exists.

“Despite [its] peculiar appearance, there is limited knowledge on the ecology and extent of distribution of these beetles,” the paper read.

All six known species of the violin beetle were found in Peninsular Southeast Asia, Greater Sunda Islands and Borneo, with the earliest species on record, the M. p. phyllodes, traced to Java in 1825.

“This shows that Basilan was once connected to Borneo [by] distribution of the species,” Lit said.
He, however, warned against illegal collection and sale of the violin beetles, which could fetch as much as $30 (P1,501) in the online pet trade.